Down the straight in the 2006 Dato Tan Chin Nam Stakes

There is no Group 1 action this week on the racetrack, but racing fans are more than compensated by the Group 2 program at Moonee Valley, which features the Dato Tan Chin Nam Stakes, a race over 1600 metres.

I’ve been attending this race meeting for over 10 years, so thought to illustrate this post with an historical photo, snapped in September 2006.

It shows Apache Cat leading a field of seven runners down the straight. Two time Cox Plate winner, Fields of Omagh, can be seen in the blue and gold silks running second last and the eventual winner of this particular version of the Dato Tan, Lad of the Manor is seen in third place in the blue and green silks.  He had the distinction the previous year of beating the great Makybe Diva in the same race. Apache Cat ran second.

Back in 2006, the feature race of the meeting was the Manikato Stakes, the first Group 1 race of the spring racing season.  It was won by super sprinting mare Miss Andretti. 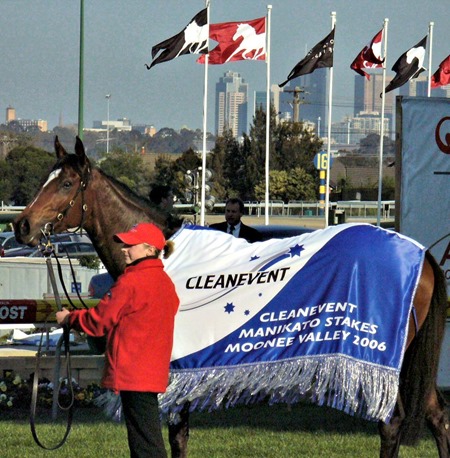 She won 19 races in a career of 30 runs, five of them at Group 1 level that included the Newmarket Handicap, Lightning Stakes and the Darley Classic. She also won the King’s Stand Stakes at Royal Ascot in 2007.

The Manikato Stakes is now run on the eve of the Cox Plate.

This year’s Dato Tan Chin Nam Stakes has attracted a cracker field that includes several Group 1 winners. The Cleaner is not one of them, but has won this race the past two years. The last horse to win three years running was Shorengo (1968-1970) so it will be a big upset if The Cleaner wins, particularly as his recent form is well below his best and he has drawn an outside barrier.

The current favourite is Japanese horse Tosen Stardom who is now with Darren Weir.

I’m  keen to see Tavago, the New Zealand trained winner of the ATC Derby. He was scratched from the Memsie Stakes after pulling out a tooth, so it will be first time he has raced in Melbourne.

It’s a difficult race to find a winner with any number of chances. Mahuta who ran third in the Memsie Stakes last week has to be considered, as does Jameka who has returned in fine form, her fourth in the Lawrence Stakes being full of merit where she finished a little over a length from the winner. The United States is also highly fancied having won the Ranvet Stakes back in autumn and running second to Lucia Valentina in the Queen Elizabeth Stakes.

The support card at Moonee Valley is far more interesting than at Caulfield last week.

For a start there’s the Group 2 McEwen Stakes, a sprint over 1000 metres. Speedy mare Heatherly will no doubt start as favourite as she recently won at her last start on the track over the same distance. The mighty Chautauqua won this race last year, but there are no sprinters of his quality in the race.  Heatherly’s main rivals appear to be Reldas, O’Malley and fellow mares Alpha Miss, Chloe in Paris and Wild Rain.

Unbeaten Western Australian filly Whispering Brook, having her first start in the East is the most interesting of the runners. She’s up against smart Victorian fillies like Zamzam, Sweet Sherry and Gretna.  First starter Piccadillies is a half sister to great sire Fastnet Rock and has ignited keen interest after trialling well.

Up in Sydney the Randwick race meeting is expected to be run on a heavy track, yet again. The main attraction is Winx in the Group Two  Chelmsford Stakes.  If the track is too heavy she may be scratched, but if she races she will be gunning for her 11th win in succession.  Perish the thought that she could be beaten, but her main rivals in the field of eight are Hartnell and colt Prized Icon.

It has warmed up in Melbourne at last and Saturday is expected to be overcast and mild with morning showers.