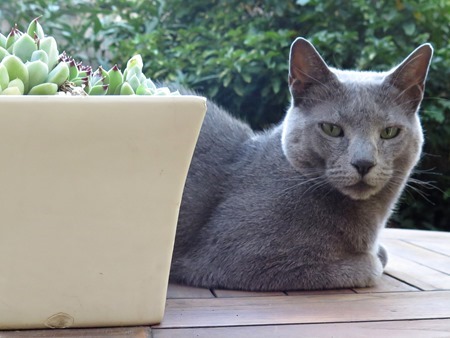 How the time has flown, though it doesn’t seem so. A lot has happened since I started. For instance I was still a member of the work force back in 2006, and one of the original cats, sweet Lizzie, is now four years dead, though Willy is still alive and kicking, albeit much older.

Cat Politics will continue into the forseeable future even if nobody reads my posts. I like constructing sentences and enjoy writing commentaries on whatever photos I snap or what captures my interest at a particular time.

Many Blogs that I used to follow have become frozen in time, which makes me nostaligic for the old blogger days of the early to mid 2000s, where the global community encouraged interesting and articulate commentary, rather than the triviality of such current popular platforms as Facebook and Twitter etc.

Of course there are still a multitude of bloggers who continue on doggedly offering their personal views to the world. Count me as one of them. 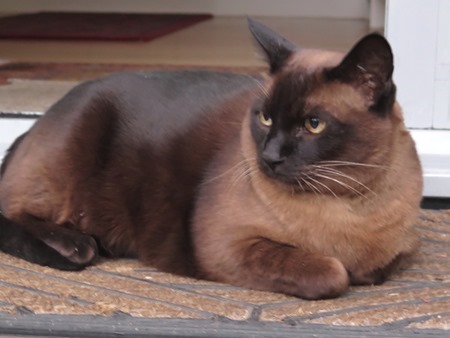 Willy on the back door mat – expecting rain (paws curled in)

The above two photos of the cats are fairly recent, snapped in the sunshine of an unseasonably warm autumn.

As I write it has turned wintry with a cold front and blustery winds hinting at the changing of the seasons.

As far as the local cat situation goes, one has sadly departed. Pickle who was Willy’s comrade in mischief when they were kittens, was euthanised about a month ago, suffering from an untreatable thyroid condition. 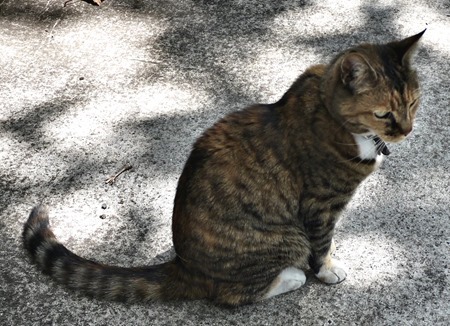 Pickle in the street

She was a lovely little cat who would run out to greet you if you were passing her house, and roll around at your feet while you gave her a pat.

Two new cats, both black and white, are agitating the cat republic. If there is a fight impending it is always one them invading another cat’s territory.

Before I publish this post I must mention the outstanding win by Chautauqua in Hong Kong last Sunday.  As usual he gave the rest of the field a start and lolloped along at the tail of the field until they turned into the straight, then unleashed his astonishing sprint to overtake the entire field on the outside and seize victory on the line.

He’s an exciting horse and a definite star of the turf, being regarded as the best sprinter in the world.  He has an excellent pedigree (Australian bred) being from Encosta De Lago and Lovely Jubly who were both talented racehorses in their day, whom I remember racing in the 1990s (Encosta De Lago) and early 2000s (Lovely Jubly).

Chautauqua will be back racing in the Melbourne Spring Racing Carnival to give racing fans more thrills.

Congratulations on your ten years of blogging. I also count myself as one of the dogged few who keep on posting, whether others read it or not. (Thankfully people like yourself do keep reading, as I do your blog).

Thanks Kay. I visit your blog as well, though I don't comment all that much.

Wow, 10 years. Congratulation Anne. I knew you were going when I started but my blog is only 7 years old this month (with my first reading group blog - still going - being a few months older than that but still not quite 8.

I'm sorry I didn't see this post come through at the time. In early May we were getting ready for our Lake Eyre Trip.

I enjoy popping into your blog though am frustrated that I don't seem to get notification if you respond to my comments, so I never know if you've tried to carry on a conversation or not! In most blogger blogs, if you don't comment with a Google account you don't get notification.

Thanks Mrs Gums, I read your blog regularly, though don't comment all that often.