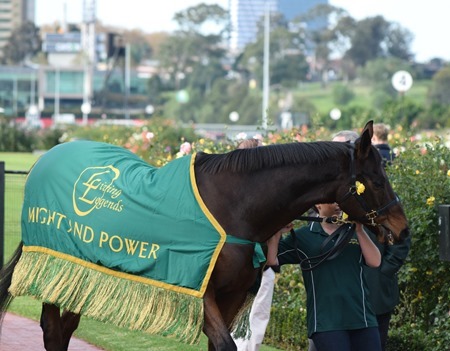 Might and Power parading in the mounting yard at Flemington

Though I would not normally attend race meetings at this time of year, it being the off season, I made an exception when I learned that Living Legend, the great Might and Power, would be the special equine guest at the Saturday race meeting at Flemington.

I last saw Might and Power in 1998 winning the Cox Plate, and felt I couldn’t miss a rare opportunity to get close to him and give him a pat.

The race meeting at Flemington was part of the National Hall of Fame raceday, to honour the 2016 inductees into the Australian Racing Hall of Fame.

Might and Power was inducted in 2002, but this year’s inductees include horses, Leilani, Luskin Star, Merman and Sydeston, Jockeys Pat Hyland  and  Noel McGrowdie, Trainers Neville Begg and Cecil Godby, and race caller Joe Brown and journalist Les Carlyon.

Arriving at Flemington around 12.45pm, I was in time to watch race 3, the Might and Power Handicap a race over 2000 metres, as I figured the eponymous champion would be present at the course for it. 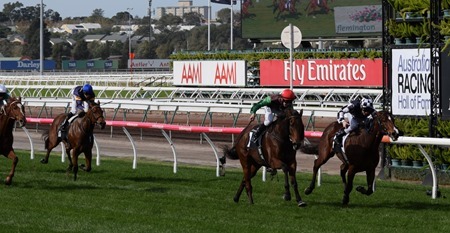 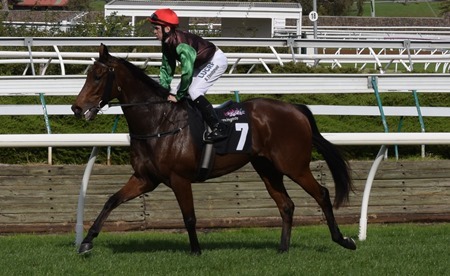 I had chanced to speak to Dr Andrew Clarke, CEO of Living Legends as I made my way to the fence to photograph the race, so knew Might and Power would be in his stall. So thence I went after the race.

A small crowd of admirers was outside Might and Power’s stall and slices of carrot were being distributed to those in attendance to offer to the big horse. He enthusiastically gobbled them up and looked for more, allowing plenty of pats in the meantime. 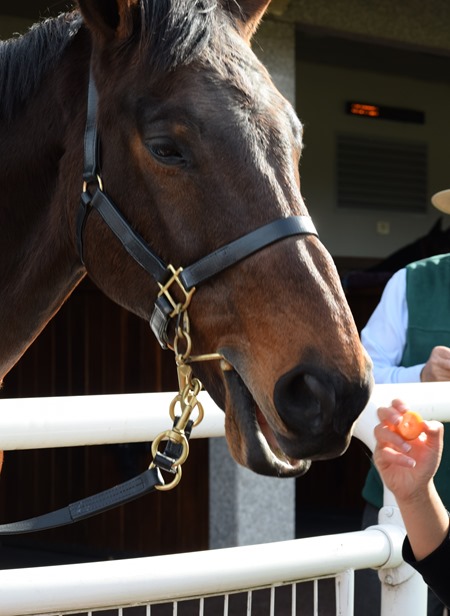 Might and Power outside his stall looking for carroty treats. 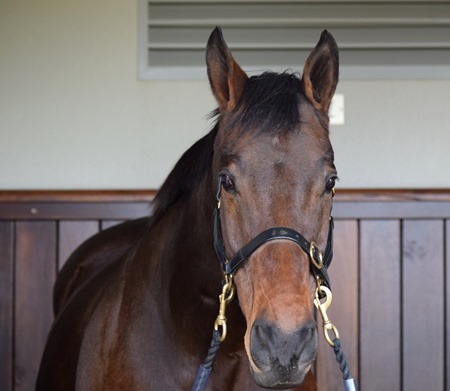 Might and Power in his stall posing nicely for a photo 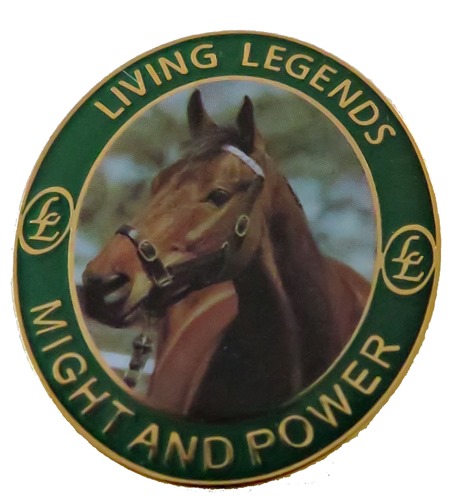 …and was delighted to add it to my racing memorablia.

Might and Power was a force to be reckoned with back in the late 1990s winning the 1997 Caulfield Cup and Melbourne Cup and winning the Cox Plate the following year, the first horse to accomplish the feat since Rising Fast in 1954.

The feature race of the afternoon was the Listed Andrew Ramsden Stakes, a race over 3200 metres (the same distance as the Melbourne Cup). The winner gains a ballot free entry into the famous race.

It was scheduled as race 7, so there were three other races to watch before it was run.

As it was a mild mostly sunny afternoon that was not an ordeal, and it gave me the opportunity to try out the Nikon D3300 again.

I must admit it takes really good action shots; for instance the finish of Race 4, the Carbine Club Handicap, which was won by Mihany from Santa Rocks and Aurum Spririt. I was really pleased the photo caught the winning post moment. 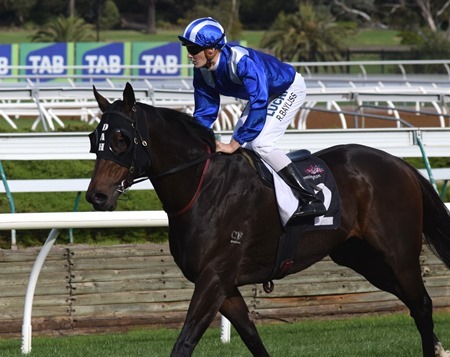 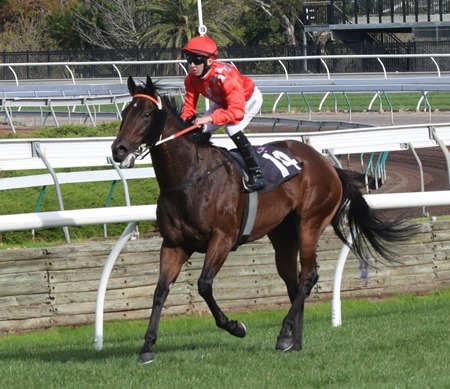 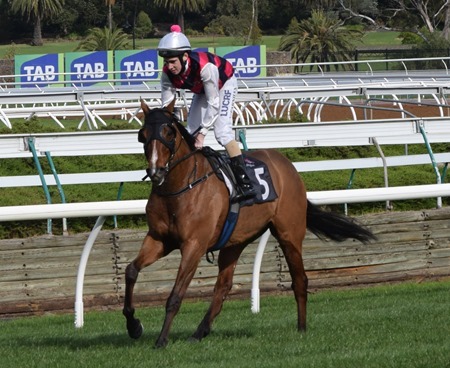 Race 5 was the Les Carlyon AC Handicap, a race over 1600 metres for three year olds.

It was won by Loyalty Man narrowly defeating Sir Sagamore and Whoop Whoop was third, a length back. 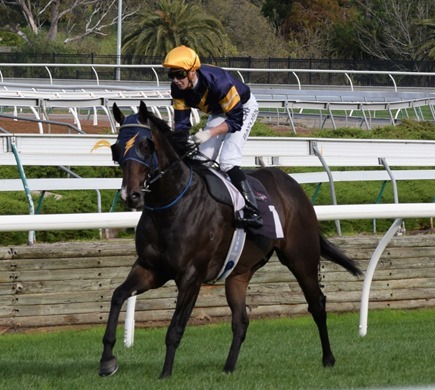 And so the afternoon flitted by.

My photographer acquaintance George, who doesn’t bet, but occasionally mentions his fancies, liked Amarela in the 6th race, and proved spot on when she won by half a length from Time to Test and Ashkannd. 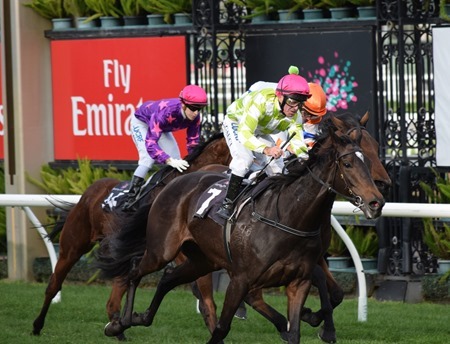 Amarela a nose in front of Time to Test approaching the finish line.

Half the field in the feature race, the Andrew Ramsden Stakes, were imported stayers from Europe and Ireland and there was even one from Japan. They were all it for a chance to run in the Melbourne Cup. 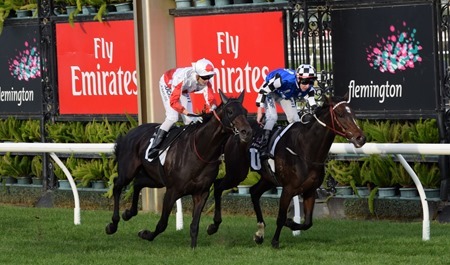 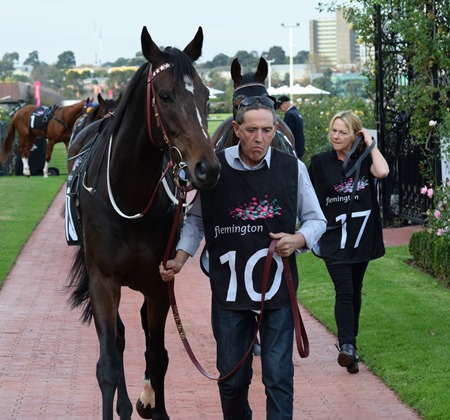 Glorious Sinndar in the mounting yard

By the time Race 7 had run, the first train back to the city was almost due to depart, so I headed to the station and home.

It was pleasant to be back at Flemington on a sunny afternoon in uncrowded conditions, and I was pleased to have accomplished my mission to meet and pat Might and Power.