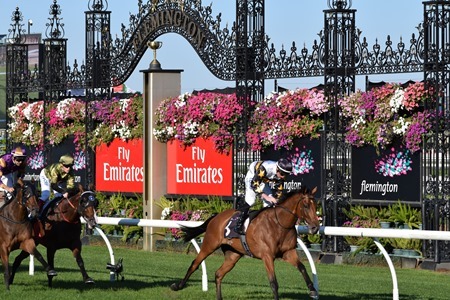 I’ve just bought another camera and it arrived last Friday, so I decided to give it whirl at the races to see how it performed.

It’s a Nikon D3300 with a 55 – 200 mm lens – the first Nikon camera I have owned or even used.  As far as Nikon DSLR cameras go, it is not a hugely expensive model nor too big and heavy to carry around. In fact it’s quite light and comfortable to use.

There’s absolutely nothing wrong with my other cameras, the Canon G16 and the little Panasonic G3, but I’ve always thought that Nikon photos taken at the races by my racing acquaintance George were superior to those I achieved with the aforementioned cameras.

My first attempt to purchase a Nikon on eBay resulted in the camera failing to arrive. I’d been scammed!  Fortunately, after raising a Buyer’s Protection Case with eBay, my money was refunded in full, so I tried another online outlet called eGlobal, who were amazingly efficient and delivered the camera in three days at a very reasonable price.

I’m still getting to grips with the camera settings, so I’m glad I took it to the races on Monday to ascertain what settings are needed in the circumstances.

On the whole I’m quite pleased with the photos I took, though there were quite a few not worth saving – too dark for some reason- which is puzzling for a bright sunny afternoon. The camera seems to have a mind of its own where exposure is concerned.

I arrived at Flemington early, in time for Race 1, as I was interested in seeing the bizarre looking filly Miss Vista, who has been dubbed Apache Cat two, due to her predominately white face. 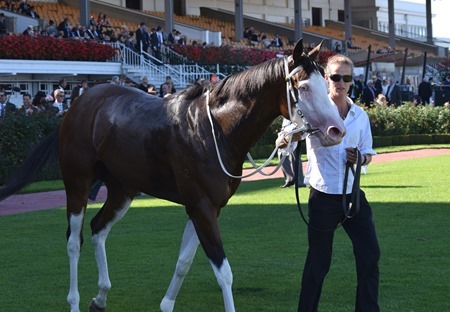 She also appears to have ability and shows some potential to be a star of the turf. She recently won her first race at Ballarat by over five lengths and was having her second start in the city, at Flemington no less.  She cruised to victory after leading throughout, to hold out Fleur Fatale by half a length with first starter Saraswati running third. 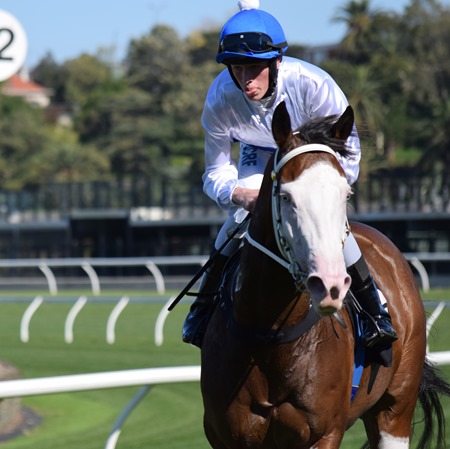 Miss Vista will now go for a spell and return in the spring, her connections, commendably, not wishing to overtax her so early in her career.

The feature race of the afternoon was the VRC St Leger, for three year old stayers run over 2800 metres and was programmed as Race 5.

As trains returning to the city from Flemington didn’t run until 4.25pm I was obliged to stay at the track for six races. It was a lovely autumn afternoon – warm and sunny –  pleasant to spend in the open air, so I didn’t mind the wait.

Race 2 was the Anzac Day Stakes, a race for two year olds over 1400 metres.

It was won by the appropriately named Throssell (after Hugo Throssell VC, who had Race 4 named in his honour) from Pyx Chamber and Smart As You Think. 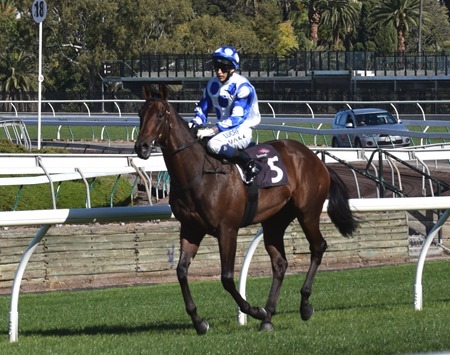 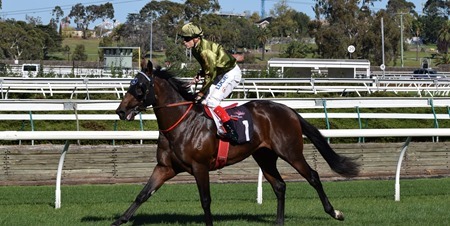 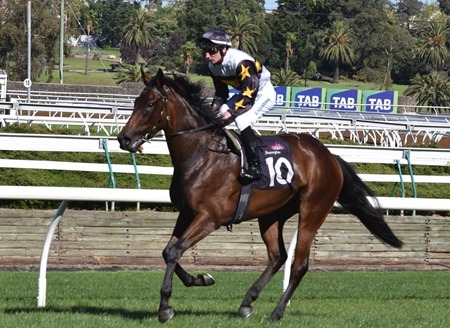 Smart As You Think 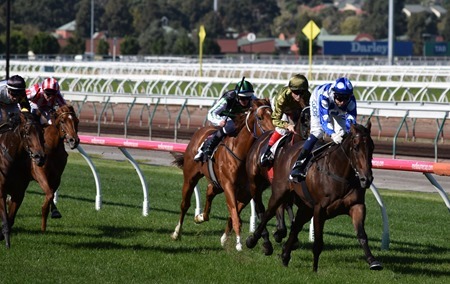 The next race, the William Newton VC Handicap was run over 1610 metres. Hijack Hussy was the favourite, but the result, as it was all afternoon, didn’t favour favourites, and the race was won by 10/1 shot Every Faith from Written and Loveitt. 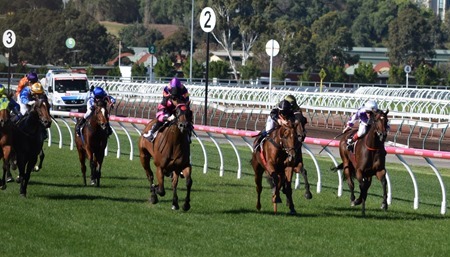 Race 3 finish down the straight 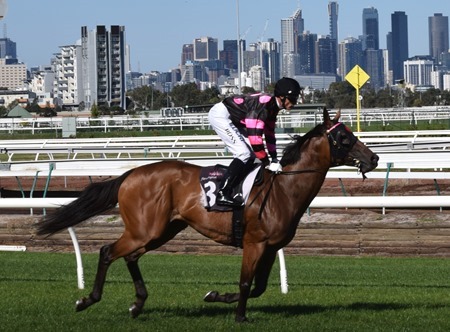 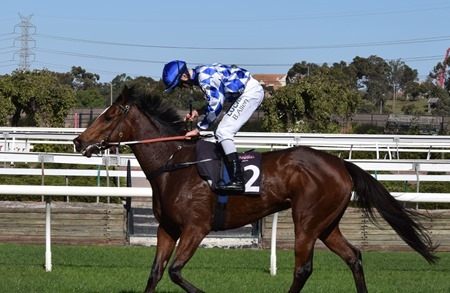 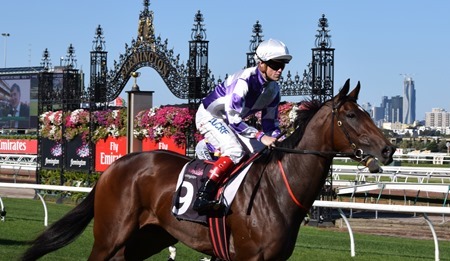 As previously mentioned, Race 4 was the Hugo Throssell VC Handicap, a race for three year olds over 1400 metres.

It resulted in another long odds winner, Un De Sceaux, who defeated  Sir Sagamore and Shockaholic by a short margin. 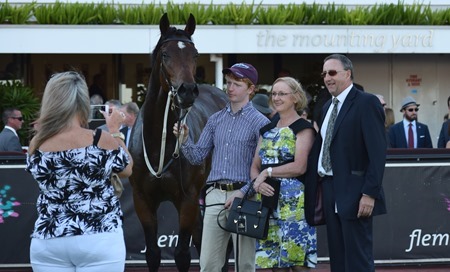 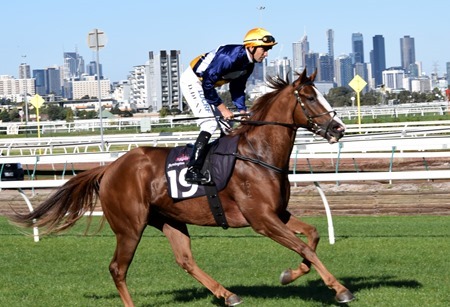 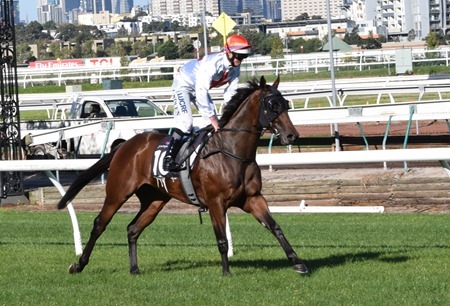 The afternoon flitted by quite swiftly and I got plenty of exercise walking back and forth from the mounting yard to just past the winning post.

The roses were still in bloom, though not in such great profusion as they were on Australian Cup Day. 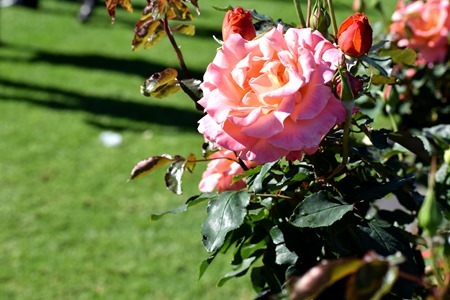 Soon enough it was time for the feature race, the VRC St Leger.

Etymology started as favourite, but he was outstayed by Cool Chap, who as his name suggests is a son of High Chaparral, noted sire of stayers. Bullish Stock ran third. 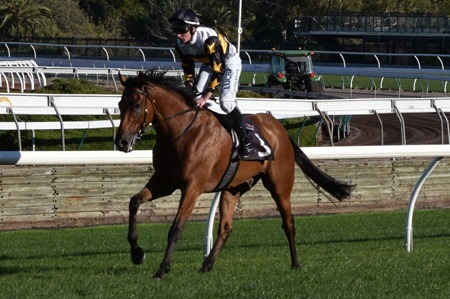 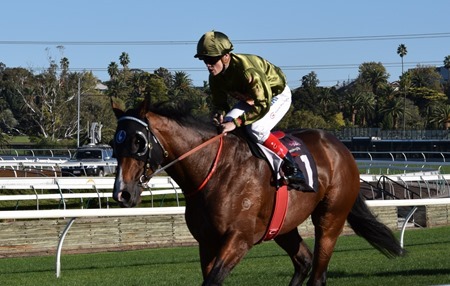 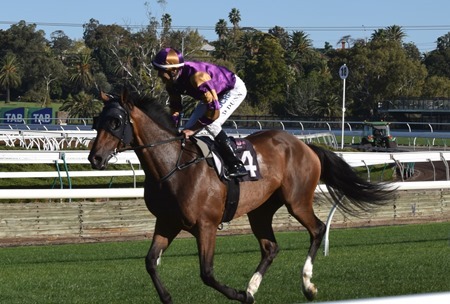 Every jockey riding a horse carrying the number one saddlecloth wore special Anzac Day silks (khaki as seen on Etymology’s jockey above). None of them were winners.

Due to the train timetable I had to stay until after Race 6, which was the Anzac Cup, another staying race, run over 2530 metres.

Big Memory who looked promising in his younger days, but hasn’t won a race for over two years, started as favourite, but was relegated to second by the humourously named Swacadelic, who came in at odds of 10/1. Don Doremo ran third. 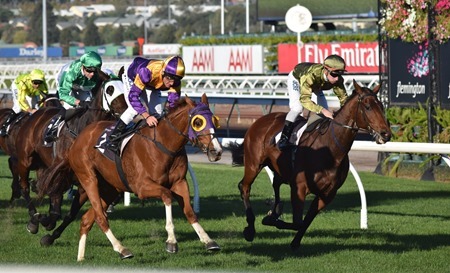 The local racing scene is pretty uninteresting from now on and livens up at the end of July, when the build up to the Spring Racing Carnival starts.

However, Adelaide has a mini racing carnival over the next few weeks, then it’s the crazy Queensland winter racing carnival, which is always of some interest.

And this coming Sunday, Australian sprint stars,  Chautauqua and Buffering, will be gunning for Group 1 glory in Hong Kong in the Chairman’s Sprint Prize at Sha Tin.

Miss Vista just stunning and I hope the connections know to put sunblock on her white nose.
not a joke.
What a drag you had that EbayBuyerBeware tangle.
Looks like the Flemington gardeners for the win to me.
best regards to you from the western paddocks.

As regards Miss Vista, I'm slightly put off by her pale eyes which make her look a bit creepy. Apache Cat has a half white face, but his eyes are dark. Miss Vista is trained by a country trainer from Kyneton, so hopefully he knows how to apply sunscreen.

The Flemington roses have to be seen to be believed - they are gorgeous - but a nuisance when you want a clear shot.