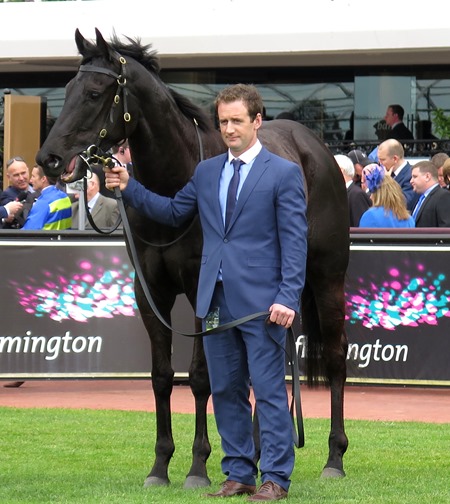 Even though it’s Easter, there is plenty of racing action this weekend, at Moonee Valley Thursday night, and at Caulfield and Rosehill on Saturday.

The feature race at Moonee Valley is the Group 1 William Reid Stakes, where a good field of 12 sprinters will be vieing for the prize. Top chances are Lucky Hussler who won the race last year, Holler who took out the Australia Stakes earlier this year at Moonee Valley over the same distance, and Japonisme who ran third in the Lightning Stakes and won the Coolmore Classic last spring.  And you really can’t overlook recent Group 1 sprint winners Flamberge and The Quarterback, though they have no form at Moonee Valley.

I don’t intend to go to the Moonee Valley meeting, but I’m looking forward to heading out to Caulfield on Saturday for their Easter Cup meeting, ostensibly to see Petits Filous in race 4.

She has not graced a racetrack since running unsuccessfully in the Moir Stakes last spring, after previously winning her first four starts by impressive margins.

As race 4 , the Jack Elliott Handicap (1100 metres), is as the race title says, a handicap, she has been weighted according to her rating, at an  imposte of 60kg giving her rivals a big weight advantage. Her opposition however is fairly weak, so she will possibly win.

I’m also keen to get a look at the sole offspring of the late Typhoon Tracy, who is entered in the last race at Caulfield on Saturday. A colt by Street Cry named Last Typhoon, he has raced seven times for two wins on rural tracks. This is his first race in the big smoke, so who knows how he will fare.  His mum was a great favourite of mine, so I hope he can do her proud.

The Group 1 Vinery Stud Stakes and The BMW are the feature races at Rosehill on Saturday, so I’ll hopefully get to watch them at Caulfield.

Jameka is the top pick in the Vinery Stud Stakes, a race for three year old staying fillies over 2000 metres. She appears to be a class above her rivals, though Risque and Stay With Me may give her a run for the money. Others with a chance are NZ fillies Capella and Valley Girl.

The BMW is run over 2400 metres, so a field of 10 tried and true stayers will be contesting it. Preferment looks to be the one to beat, but trying hard will be Mongolian Khan, at his favourite distance, Arab Dawn an attractive British import, Who Shot Thebarman, Rising Romance and three year old Montaigne.