Wayside Back In Time–An Evening With Gillian Welch 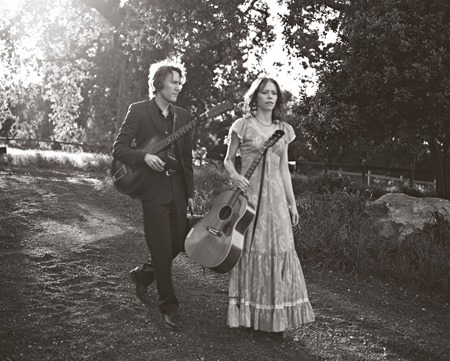 At Luna Park the rides were all screams and flashing lights and the sea was sparkling in the bright sunshine of early evening as we reached the seaside suburb for an early dinner at an Acland Street restaurant, prior to attending the dazzling Gillian Welch concert at the Palais Theatre.

It was a sold out show as had been the concert the previous night, witness to the love affair Melbourne has with the Nashville duo.

Gillian Welch and David Rawlings last graced these shores in November 2004, where I had the pleasure of seeing them perform at another Palais, an intimate venue (no longer in operation) in Hepburn Springs.

I have been a fan of their music for 20 years – has it been that long - so their concert was a must see for me, and the group of friends who also attended the 2004 show.

It was a younger audience this time, some of whom would have been babies when Gillian Welch released her first album, Revival,  in 1996.

Thunderous applause greeted the couple as they stepped on stage to begin their first set, kicking off with Scarlet Town, a track from Gillian Welch’s lastest album The Harrow and the Harvest.  This was followed by Elvis Presley Blues and My First Lover from Time (The Revelator).

Songs from across Gillian Welch’ s five disc repertoire were performed as well as several wonderful covers, a highlight being their thrilling cover of  Jefferson Airplane’s White Rabbit in the second encore.

It’s like being in an alternate reality witnessing Gillian Welch and David Rawlings play their bleak Americana songs that encompass blues, country, bluegrass, gospel and old style rock n roll. A great many of their songs deal with death and desperation, which the couple cheerfully acknowledged with comments like “The next one’s a killing song”, or “this one’s faster, but sadder –more people die”.  They have established their own style and have a perfect on stage chemistry that is memerising to watch.

David Rawlings unique guitar playing is wondrous to behold and beautiful to hear. Quite a few songs contained an extended “jam” session,  David exhibiting his consummate skill on his old guitar to rapturous applause.

At one stage Gillian broke from her usual staid stance and danced a jig to Six White Horses, with thigh slapping accompaniment, lifting her long skirts to reveal cowboy boots.

Melbourne audiences fell in love with the duo in 2004, where they sold out four or five shows at various venues in Melbourne and rural venues.  Melbourne has a long memory for musical excellence, as the first Melbourne concert this time round sold out in 45 minutes.

The duo were accorded several standing ovations that coaxed them back on stage for three encores. The final song, Long Black Veil was sung unmiked to a hushed audience, Gillian remarking that it was the first song the duo performed together.

I’m pleased I’ll get to see them again on the 19th February in an extended band called David Rawlings Machine. No doubt it will be quite different and hopefully photos will be permitted, so I can get some memorable shots of the King and Queen of Americana Gothic.

6. Make Me a Pallet on Your Floor ([traditional] cover)

7. I Want to Sing That Rock and Roll

12. Down Along the Dixie Line