Black Caviar Lightning–Brilliance in the Offing 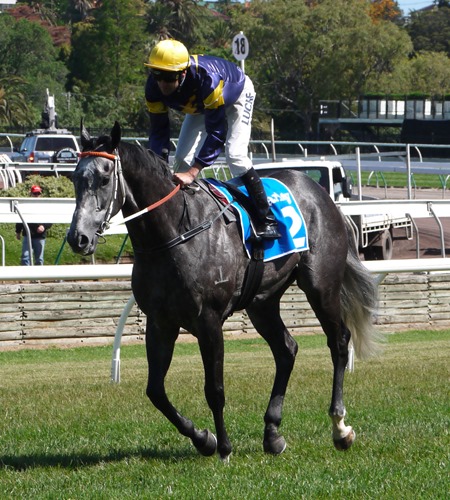 I can hardly wait for next Saturday’s race meeting at Flemington, which looks to be a whizz banger, with the feature race being the Group 1 Black Caviar Lightning, a sprint over 1000 metres.

Named of course, these days,  in honour of the great unbeaten mare; she was the only horse to win the Lightning Stakes (as it was then known)  three years in succession 2011 - 2013.

Since that time it has been won by Snitzerland in 2014 and by Lankan Rupee last year. He’s out of action until the spring recovering from an operation.

An elite field of seven competitors will contest it, all of them returning from a spell over summer and kicking off their autumn campaigns.

Chief among the contenders is the mighty grey speedster Chautauqua who was a main player in the spring carnival, winning three of his four starts before going down narrowly to Delectation on a heavy track in the Darley Classic on Emirates Stakes Day.

Delectation is also part of the field as is Chautauqua’s old rival Terravista.

Then you have young guns Exosphere, a stunning looking son of the Black Flash, Lonhro, and Japonisme who won the Group 1
Coolmore Classic at his last start, where Exosphere finished fourth on his first run down the Flemington straight.

It has rained this week, though not enough to affect the track which will most likely be rated as Good, so that will suit Chautauqua down to the ground (so to speak).

The support card is nothing to sneer at either with even the listed two year old race, the Talindert Stakes, being fascinating. The first of So You Think’s progeny that I will have seen is one of the runners – a filly  named Conscious who is having her first start.  Also a daughter of former champion mare Private Steer called Clockwork Orange is another in the field worth seeing.

Crown Oaks winner Jameka resumes in the Group 3 Vanity, a race for three year old fillies over 1400 metres.  She’s up against star Western Australian filly Perfect Reflection who won the Group 1 Kingston Town Classic at her last start. She’s unbeaten in five starts in her home State, so it will be interesting to see how she goes at her first start in the East.

Also in the field are Sacred Eye and Don’t Doubt Mama, familiar names from the Spring carnival.

The boys version of the Vanity is the Group 3 C S Hayes Stakes, also run over 1400 metres. These races are sort of Australian Guineas preludes.

I intend to getting to Flemington by 12.30pm to watch the Talindert Stakes, then may stay for the Ascot Racecourse Trophy, which has Divan in the field. I last saw him on Emirates Stakes day where he won a 2000 metre  race in weaker company.  He’s probably having a practice run as he’ll mostly be aimed for the big staying races of spring, and  the 1400 metres of this race is not his best distance.

The Sydney racing action will be at Rosehill this Saturday, the feature races being the Group 2 Silver Slipper Stakes, Millie Fox Stakes and the Hobartville Stakes.

For Golden Slipper bound two year olds. the Silver Slipper Stakes is run over 1100 metres. Seven youngsters have accepted, and the best of them appears to be Defcon who was scratched from the colts Blue Diamond Prelude last Saturday and Astern.  It’s not a strong field, so any horse could win.

Everyone’s favourite grey mare Catkins makes her first appearance for the autumn in the Millie Fox Stakes (1300 metres), a race she won last year. Also resuming after an injury induced break is the highly regarded First Seal who has the distinction of defeating Winx twice in their younger days and is a Group 1 winner. Catkins has a great first up record, so could very likely win the Millie Fox for a second time.  Of the rest, I’ve Got The Looks, Telepathic, Press Report and Ballet Society could run a place.

Caulfield Guineas winner, Press Statement returns to the fray in the Hobartville Stakes, a race for three year olds over 1400 metres. He faces tough competition from Vanbrugh, his stablemate, who won the Group 1 Spring Champion Stakes at his last start. Others with claims are Etymology who ran second to Tarzino in the Victorian Derby, Dal Cielo, Shards and Montaigne.

Cult New Zealand horse Hasselhoof will be out to redeem his reputation in the Listed Parramatta Cup, after running unplaced at his first start in Australia a couple of weeks ago. The race is worth watching to see if he succeeds.

Racing Victoria has abandoned the 30 minute interval between races for weekend meetings, though will continue the trial during the weekday meetings. Sydney has come to party and agreed to do likewise.

Saturday has the Melbourne White Night light show on in the evening, so I’ll certainly not make the same mistake as last year by trying to catch a tram home, which took me hours. I’ll stick to trains this time.