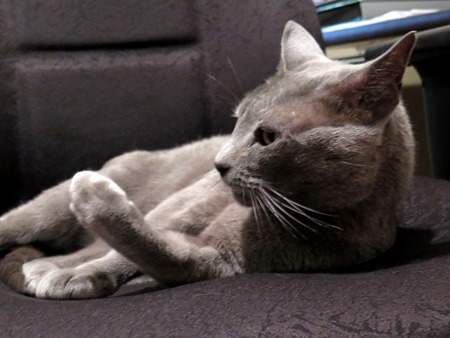 Talya hates having her photo taken. When you point a camera at her she invariably starts washing herself and ignores all cajolements to cooperate. So I had to be fast to get the above shot and catch her mid wash.

I spent New Year’s eve watching episodes of Wolf Hall, the highly regarded BBC TV Series based on Hilary Mantel’s novel of the same name and its sequel Bring Up The Bodies.  I was given the DVD for Christmas and was pleased to receive it as I’d given it as a present to two friends, and hadn’t bothered to acquire a copy for myself.

It certainly lived up to the critical praise that has been heaped on it.

In a word, it is stunning: the costumes, sets, and acting were all first class. The attention to detail as regards the period setting (1500 to 1535) during the time of Henry VIII is commendable. Nothing jarred as anachronous, the lighting being predominantly candlelit and sombre, setting the mood of the times.

Mark Rylance as Thomas Cromwell is superb, as is Claire Foy as Anne Boleyn and the support cast are spot on character wise.

I thought the screen version of Jonathan Strange and Mr Norrell was excellent and one of the best I’ve seen. Wolf Hall is just as good.

Hopefully the long awaited third and final book of Hilary Mantel’s take on the life of Thomas Cromwell will be published this year.

So far, reading the lists of books expected to be published in 2016 have left me disappointed, with nothing much taking my fancy, and books by my favourite living authors being in the main missing from the lists.

However, dare I hope that the 10 year wait for the 25th Anniversary edition of John Crowley’s Little, Big will be over this year. Every year since I subscribed to the edition I’ve been hopeful of seeing it finally published. This year may be the one where I will finally hold it in my hands. The latest Newsletter on the edition envisages the book going to press in March 2016, May 2016 at the latest.

I have several musical treats in store early in 2016 – Gillian Welch and David Rawlings being the most highly anticipated. That’s in February.

In late March I’ve booked for a Jason Isbell concert at Melbourne Recital Centre. It’s a fabulous venue, so it will be a treat to see him there, after putting up with a stand up show at a pub venue the last time.

Eilen Jewell and her band are also expected to be touring in March  2016. Hopefully she will also play at a decent venue like Thornbury Theatre or Memo Music Hall or even the Recital Centre.

There’s only a little over a month to go before the first Group 1 of the Autumn Racing season is scheduled.

I’ve been missing going to the races, so yesterday I attended a low key meeting at Moonee Valley. The main attraction was the promising three year old filly Love Days having her third start. She’d won her first two in dominant fashion, so there was something of a hype surrounding her. I’m chary of  hyped youngsters these days as they eventually disappoint, but just in case they are the new Black Caviar, I’m always interested in seeing them in the flesh. 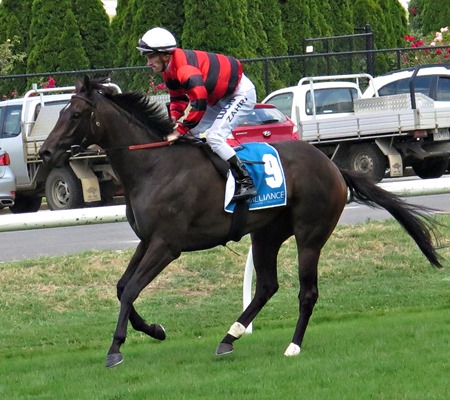 It was pleasant being back at the track with all the pretty horses, but certainly not a day for successful punting. I had one bet on Orion in Race 2 shortly after I reached the track, but he missed out on a place, so I eschewed wasting my money on anything after that.

The majority of winners over the afternoon were long shot outsiders, and that also proved the case when Race 5, the Gold Carat was run.

Love Days was the hot favourite, but she had a torrid run, three wide for most of the race, and a clever ride by top jockey Damian Oliver resulted in 20/1 shot Rocky Boombao winning the race, lowering the colours of Love Days who couldn’t catch him and finished second.

Rocky Boombao steals a lead in the Gold Carat. 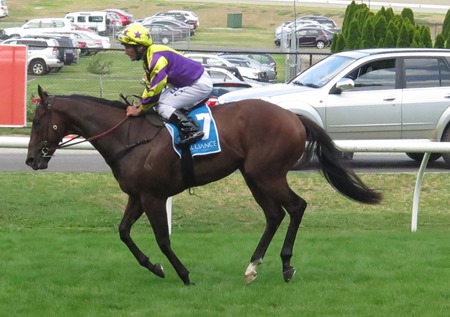 The most interesting race of the day was the Perth Cup at Ascot and it was won by the wonderful staying mare *Delicacy who started as the  top weight, carrying 59kg. She defied history with her win, being the first mare to win the race at that weight. She certainly has delivered on her promise of the 2015 Autumn where she won two Derbys and two Oaks and was awarded Australian Champion Three Year Old Filly of 2015.

There’s a possibility that she might contest the Australian Cup at Flemington in March. I hope so, as I’d love to see her in the flesh.

With that I wish everyone a rewarding and interesting 2016 as I hope for myself.

* Delicacy unfortunately sustained a tendon injury in the Perth Cup and has been retired. It’s a disappointing but a commendable decision by her owner. However, the consolation prize is that her younger stable mate Perfect Reflection who defeated Delicacy in the Kingston Town Classic will possibly be contesting the Australian Guineas in March at Flemington.