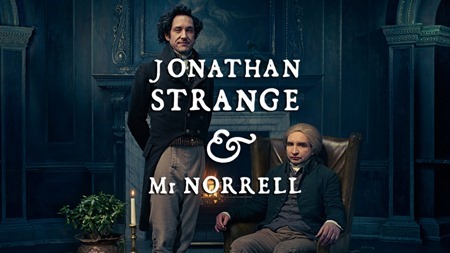 For the past week I’ve been in thrall watching the superb translation to screen of one of my favourite novels, that being Jonathan Strange & Mr Norrell by Susanna Clarke, published in 2004.

Most of the time when you watch a screen version of favourite novels there is a sense of disappointment, but not so in this case. The casting is spot on, the cinematography is wondrous to behold, and the book is translated faithfully to screen.

Of course there are some gaps, but it is understandable in the case of Jonathan Strange & Mr Norrell, it being a voluminous complex book with a multitude of delightful footnotes, which are only fleetingly quoted in the TV series.

The story is an alternate history of England set during the time of the Napoleonic Wars, where Magic has been rediscovered after a long period of disuse.

Two magicians, the eponymous gentlemen of the title, have found a way to practice magic, Mr Norrell drawing his knowledge from books, Jonathan Strange having a natural talent for it.

Mr Norrell is the first to demonstrate practical magic, causing statues in a cathedral to come to life, and raising Lady Pole from the dead.

The latter act has consequences that involve the Gentleman with the Thistledown Hair, who claims half of Lady Pole’s life in exchange for his help in her resurrection.  The Gentleman is a Fairy whose motives are not in the least benevolent.

The DVD version of the BBC TV Series contains the full 7 episodes and I watched one episode a night, not wishing to rush through it, but savour each episode as it happened.

I’m left haunted by it along with a strong desire to read the novel again, which I recall is elegantly written in a dry witty tone.

The screen version of Jonathan Strange & Mr Norrell is a high quality production and one of the best I’ve seen. The sets and costumes are magnificent and the cast, as mentioned before, are true to character.

Highly recommended if you’re looking for something different to watch from the usual fare.
Posted by Anne S at 8:07 pm