An Annual Poser – The Melbourne Cup 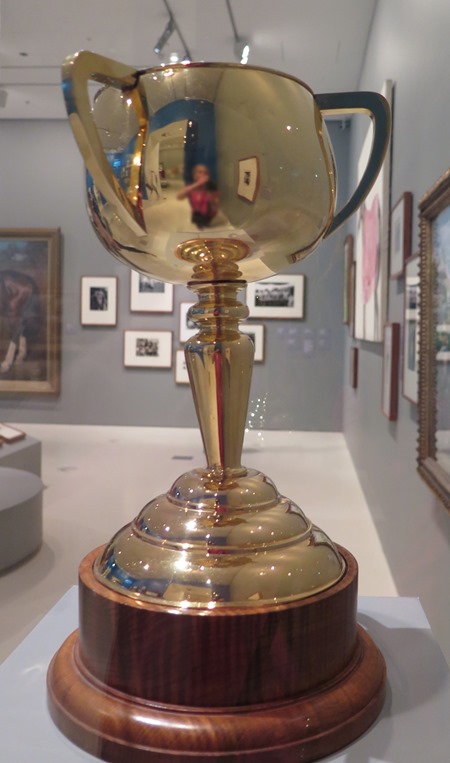 As usual I haven’t a clue as to who will win the Melbourne Cup, and I haven’t had much time to study the form, but here are my thoughts on the so called race that stops a nation.

First, a bit of pictorial history.

I recently attended the National Gallery of Victoria’s Winter exhibition “Masterpieces from The Hermitage:The Legacy of Catherine the Great” and whilst there took time out to view the concurrent exhibition “The Horse”, which naturally appealed to me.

As you were permitted to take photos, I took a few that were related to Australian horse racing, the Melbourne Cup in particular. 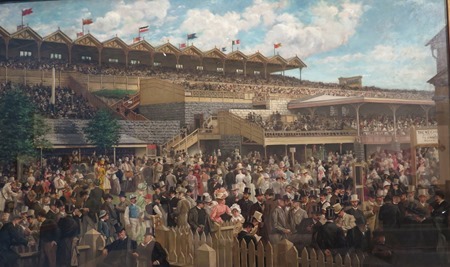 The Betting Ring at Flemington 1887 by Carl Khaler 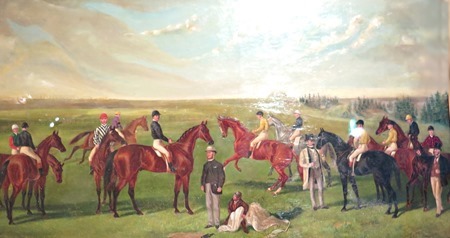 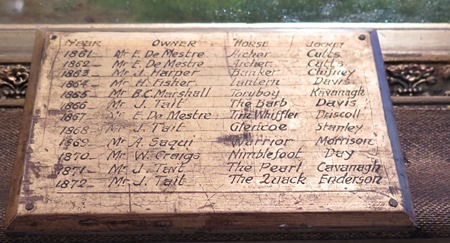 Handwritten note attached to the above painting

I was vastly amused by the following photograph by E G Adamson of a race crowd from the 1920s to 1930s, in sharp contrast to the current spring attendees with their outrageous costumes and champagne habits. 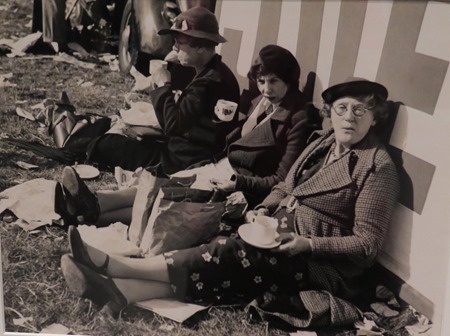 So, this year’s Cup…

Now that Bart Cummings has passed away, I have been trying to devise a new strategy to find the winner of the Melbourne Cup, not that Bart had any viable runners in the last year or so.

I’m sticking with the Zabeel factor and the only one of his sons in the race is the Chris Waller trained Preferment. He has won two races this spring, the Group 2 Hill Stakes and the Group 1 Turnbull Stakes. He also won the 2014 Victoria Derby and if he wins the Melbourne Cup, will become one of the few who have won the Derby/Cup double. Efficient was the last horse to do so in 2007, and was also sired by Zabeel.

As usual the bulk of the field is made of International challengers, from the UK, Japan, France and Ireland.

You can’t overlook the Japanese and current favourite is the Japanese bred Fame Game who finished 6th in the Caulfield Cup.

This spring, as far as the big three races is concerned, locally bred horses won both the Caulfield Cup and Cox Plate, whereas last year the winners came respectively from Japan and Ireland. That leads me to hope that an Australasian bred horse can win the 2015 Melbourne Cup and make it 3/3.

As well as Preferment, there are four other local contestants - the classy Criterion if he can run the distance, Who Shot Thebarman who ran third in the 2014 Melbourne Cup and long shots Prince of Penzance and Gust of Wind, the sole mare in the race.

I’m really disappointed that Mongolian Khan is not part of the field. He was scratched early last week after a colic attack. I trust he will make a full recovery and that we’ll see him again next year.

The best of the Internationals, barring the Japanese, is Trip To Paris who ran second in the Caulfield Cup.

And finally, because I like his name, I’m going to have a small bet on Max Dynamite, who certainly can run 3200 metres.

Even though my Flemington Season ticket admits me to the Melbourne Cup, I am not planning on attending the event. I had enough of crowds on Derby Day, and it will be much worse on Cup Day as I experienced first hand last year.

I’m going to a Fleetwood Mac concert on Wednesday night, and will probably attend Crown Oaks Day and Emirate Stakes Day. So it’s big week for events, then it will all die down to not much at all.

Good Luck with picking the winner of the Melbourne Cup. Take my vague tips with a grain of salt.

Love the 1920s-30s crowd! And very glad you mentioned the eventual winner in there. I had him in a sweep and thought my money was gone!! Haha. That's the extent of my betting and race-following.

Alas I had no money on Prince of Penzance, though I thought the race result was very special and quite moving with Michelle Payne doing it for the girls and her little brother Stevie,a victim of Down's Syndrome being the horse's strapper.

Well done on winning the Sweep!