After the Flood – Oaks Day Review

As expected, it was a full week of outstanding racing, and Melbourne’s fickle weather certainly added several dramatic moments to the action.

The Melbourne Cup result was greeted with astonishment and delight by most people.  I must admit I felt somewhat misty eyed when I watched it on TV – a great racing story.  It was like a Melbourne Cup of yesteryear, when the battler rattled home at big odds.

It’s unfortunate that old Red Cadeaux sustained an injury during the running of the Melbourne Cup. He is apparently recovering well from surgery and will remain in Australia at Living Legends, where he’ll no doubt be a popular resident.

Michelle Payne’s winning ride on Prince of Penzance made it the most memorable Cup in  years and Michelle was still riding high at the two subsequent race meetings at Flemington.  I snapped a photo of her on Oaks Day when she was fronting yet another media interview, wearing her Melbourne Cup jacket. 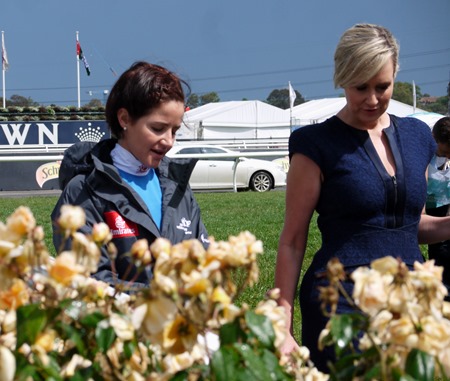 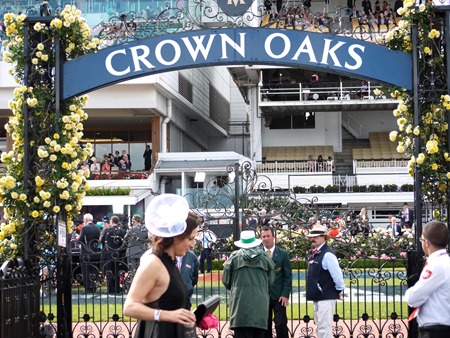 Oaks Day was notable for the wild storm that hit the course just after 2.00 pm. I had just stepped off the train when the deluge started, but managed to find shelter, without getting too wet, under an awning in the Bookies Ring. 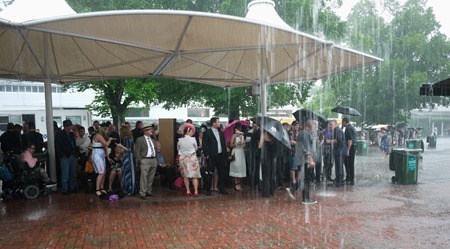 Photo of crowd opposite from me, sheltering from the storm

Thunder rolled and lightning flashed and a wild windy rain storm lashed the course turning the public lawn into a quagmire and a challenge for the high heeled ladies to walk on. Even with flat shoes, some areas were extremely squishy and required an effort to lift your feet.

The races were delayed until the storm passed which it did after about 20 minutes. In the mean time the track was downgraded to Heavy 9 and jockeys and horses returned to scale covered in mud. 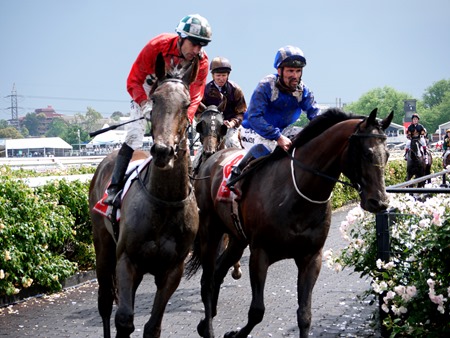 Race 5 was the Listed TCL Curved TV Stakes and it was won by the Chris Waller trained Hursley from Sea of Tranquility and War Legend. 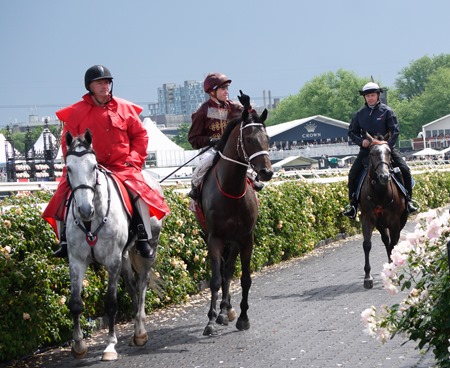 In the stalls area several of the Crown Oaks contenders had arrived and were cosy and dry in their stalls. 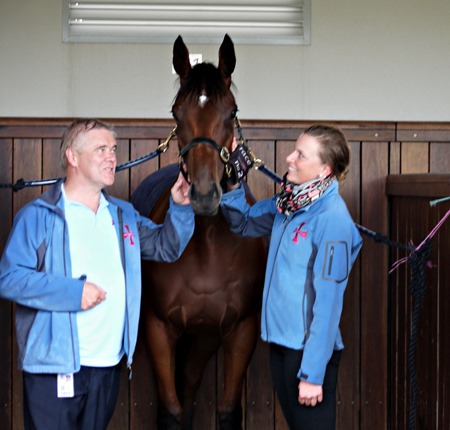 Jameka posing with her strappers 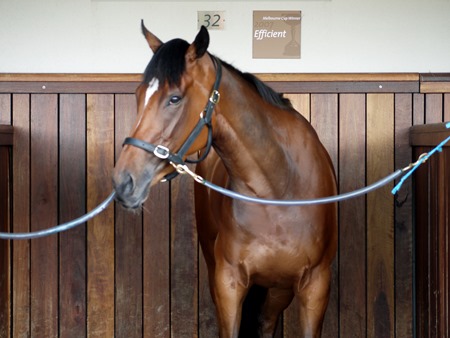 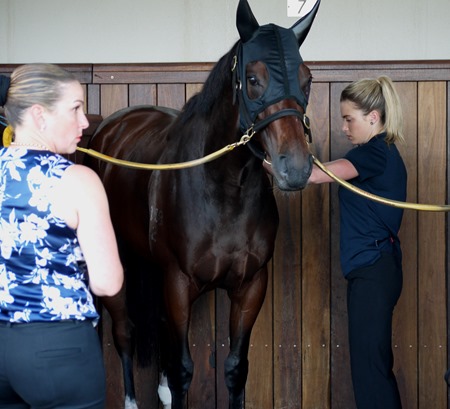 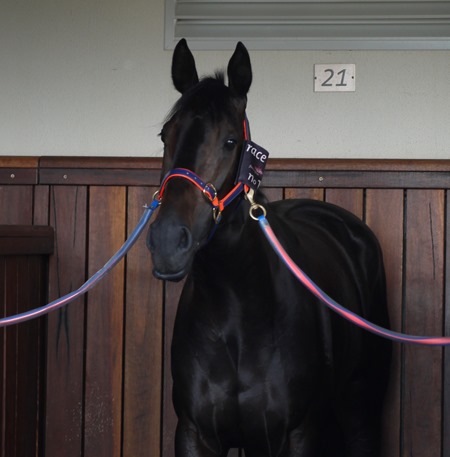 Race 6 was the Dilmah Earl Grey Stakes, a sprint over 1000 metres and it was won by The Quarterback from the appropriately named Wild Rain and Office Bearer. 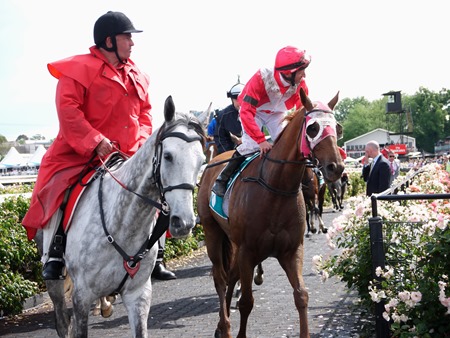 As the afternoon progressed the sun came out and I even got sunburnt, having not bothered to put on sunscreen, thinking the forecast was dire enough not to warrant it.  I should have remembered – put on sunscreen and take an umbrella to cover all contingencies.

For the next few races I watched from a handy position just past the winning post where a track access gate allows patrons to cross from one side of the track to the other.  You could see the muddy track left by the foot traffic which caused some concern for the horses running across it.

The Group 3 Mumm Stakes was the penultimate race before the feature event and the soon to retire Jimmie Cassidy was aboard the favourite Hidden Pearl, the second last ride of his long and illustrious career. 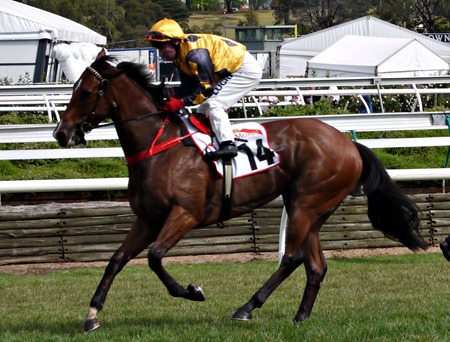 However, he wasn’t to go out a winner, with outsider Pittsburgh Flyer winning from Dublin Lass and Brook Road 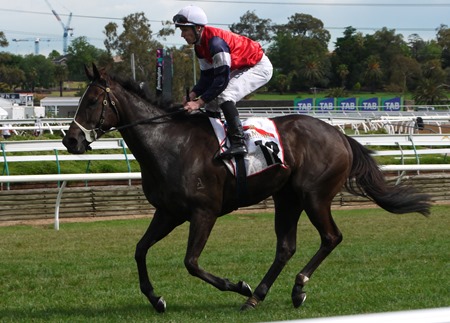 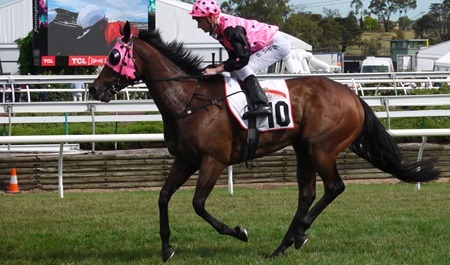 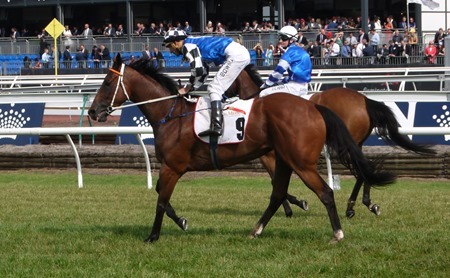 When considering my fancies for the Crown Oaks, I was leaning heavily towards Jameka after her slashing win in the Vase on Cox Plate Day where she beat the eventual Victorian Derby winner Tarzino, but had doubts about her ability on heavy tracks and her breeding for stamina over distance.

She certainly put those doubts to shame when she stormed home after racing on the speed for most of the race, winning by over two lengths from Honesta and Ambience. There’s no doubt that she is an outstanding filly worth following in the future. 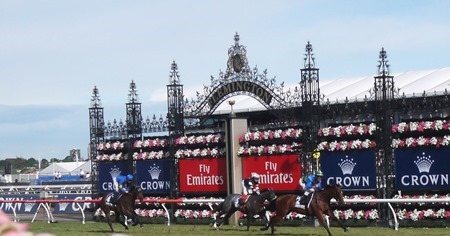 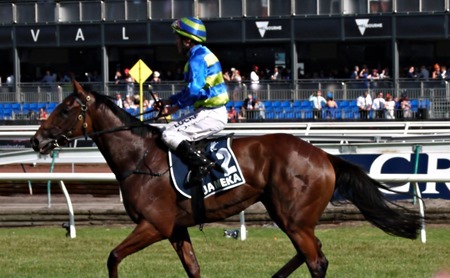 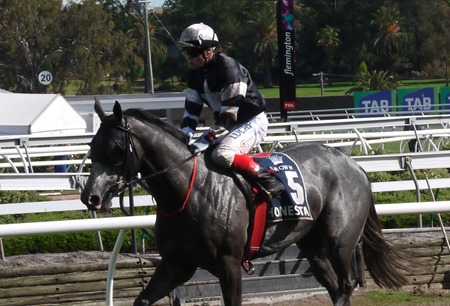 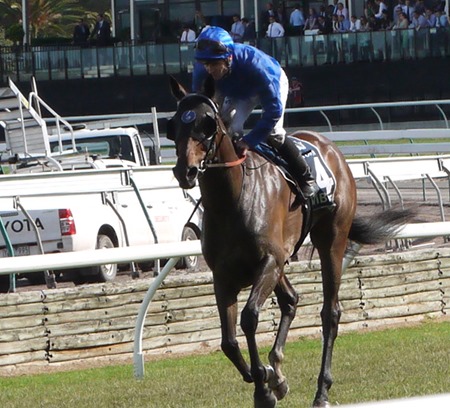 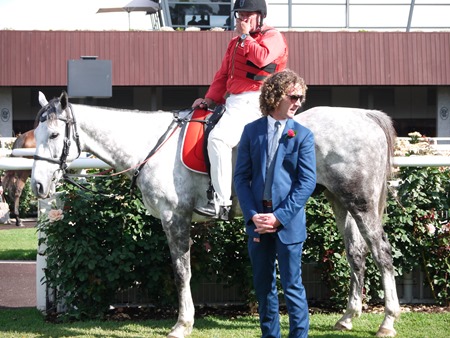 Oaks Day was an amusing outing and I was delighted that Jameka won the feature event. The wild weather added another dimension to the day. Fortunately no horse was injured during the storm or afterwards.

My review of Emirates Stakes Day will follow shortly.