Mongolian Khan holds to the lead to win the Caulfield Cup

It was a much less tiring outing to the races on Saturday, though the crowds of once a year racegoers were larger than at the Caulfield Guineas meeting. There was much drunken revelry and people were getting somewhat tired and emotional by the time the Caulfield Cup was run at the end of the afternoon.

As for me, I got to the track around 2.00pm, when Race 3, the Group 2 Caulfield Sprint had just been contested. Remarkably, it ended in a dead heat for first between Lumosty and Eclair Choice, a carbon copy result of last year, which saw Bel Sprinter and Miracles of Life dead heat in the same race.

With plenty of time on my hands I headed to the stalls area to check out on who had already arrived at the course.

Catkins was standing placidly in her stall… 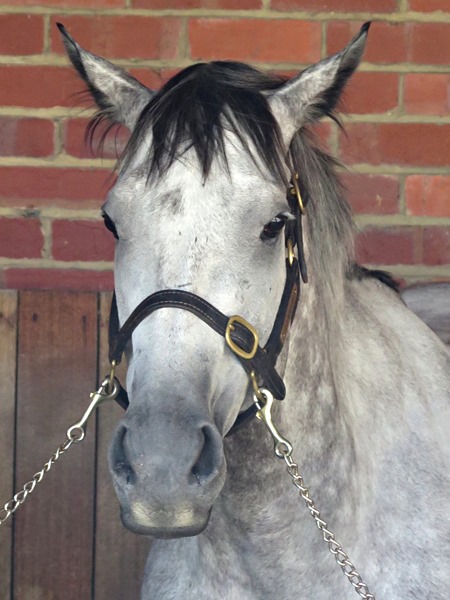 …along with the rest of Chris Waller stable contingent, Amicus and Royal Descent for instance. 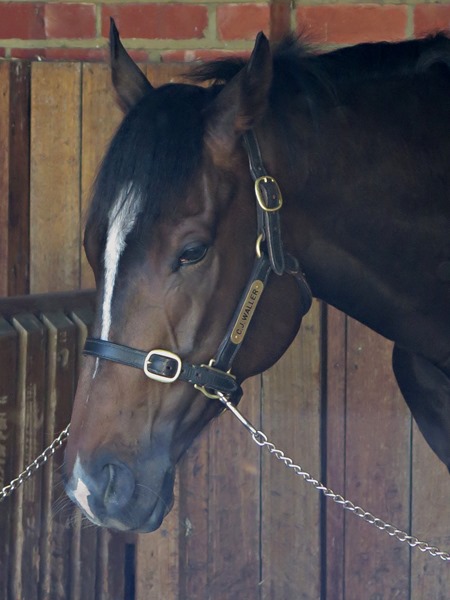 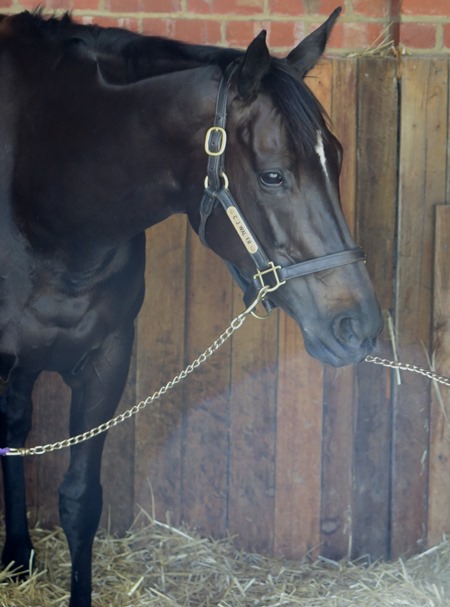 Further along, Rising Romance was rubbing herself affectionately against her strapper… 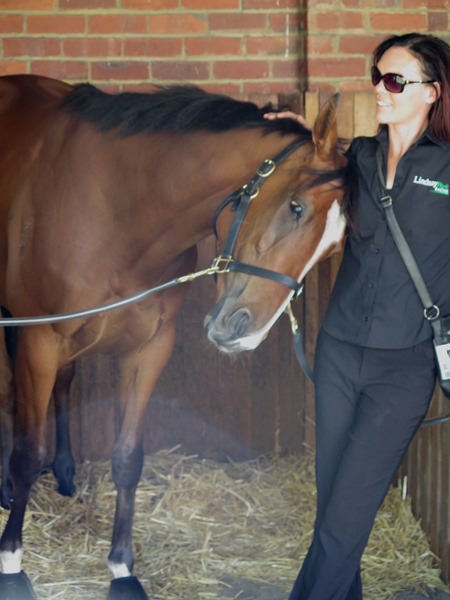 Race 4 was the Group 3 Ethereal Stakes, a race for Oaks bound three year old fillies, run over 2000 metres, so was of interest in light of the Victorian Oaks.

It was won by Dawnie Perfect at big odds. She’s a lovely looking filly out of Big Brown and Zabeel mare Zagalia and is owned by John Singleton, who also bred her. 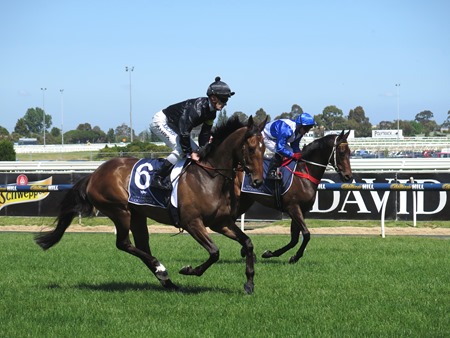 Dawnie Perfect (inside) & Alittle Loose on their way to the barriers

Returning to the stalls area after the race, the International runners were in their stalls, the Japanese horses next to the British and Irish Caulfield Cup hopefuls. 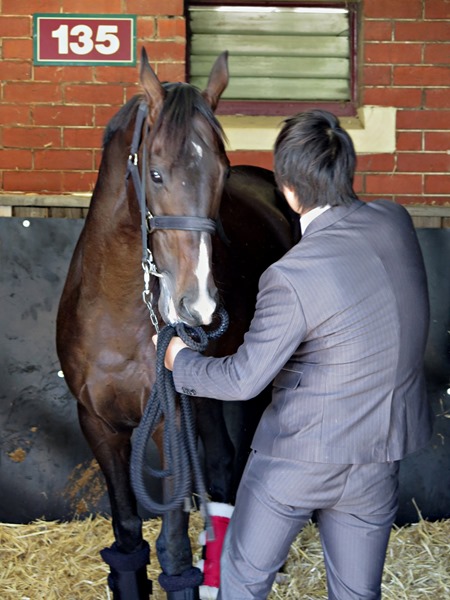 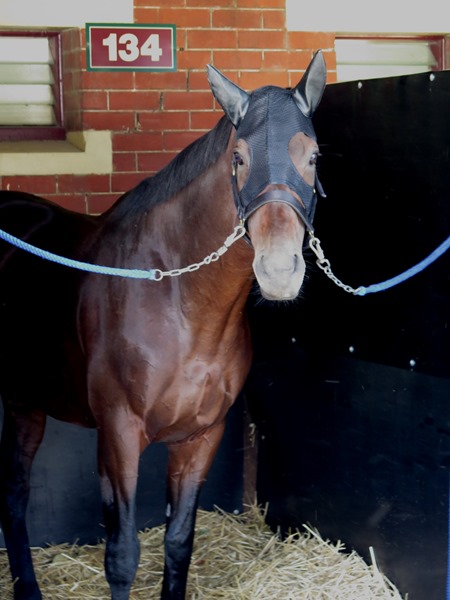 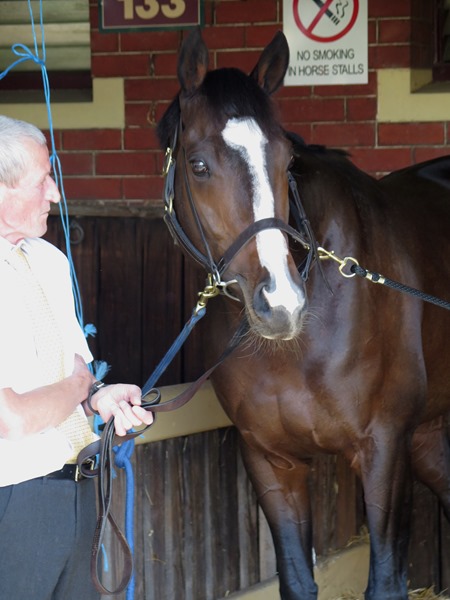 Snow Sky – from the UK 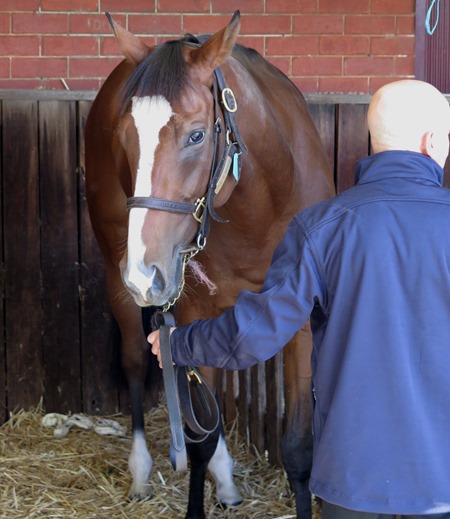 Trip to Paris – from Ireland

For Race 5, the Caulfield Classic, I stayed in the relatively quiet area close to the pre parade ring, where you get a good view of the track and the horses going to the barriers. 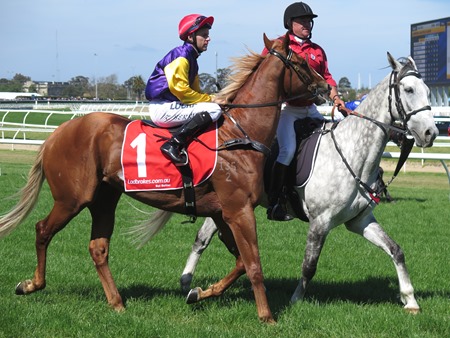 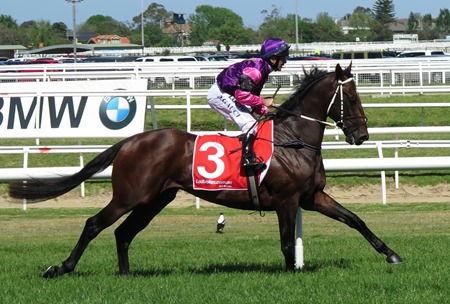 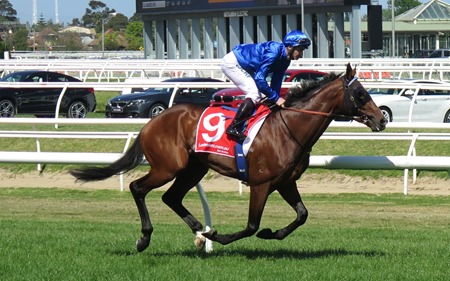 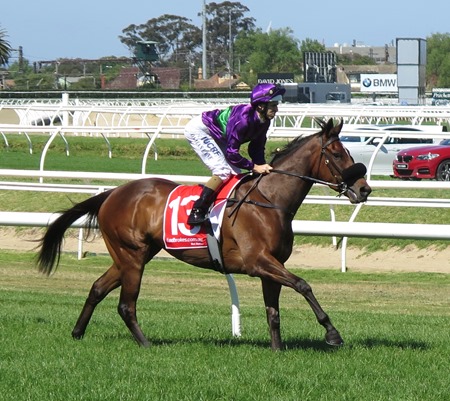 The race was also over 2000 metres and had a field of 12 colts and geldings and one filly, Sacred Eye, who beat them all by a length. 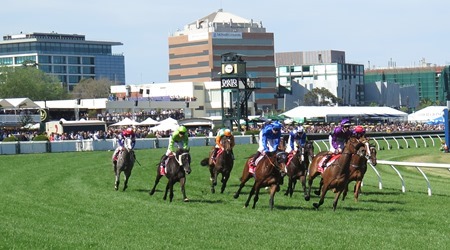 Past the post in the Caulfield Classic – Sacred Eye still leads.

Sacred Eye is by High Chaparral from Rock of Gibraltar mare Musidora and is being aimed at the Oaks and could well win it.

I returned to the public lawn for Race 6, the Group 3 David Jones Cup, another 2000 metre race. Stratum Star was the class horse in the race, and his form held true when he won the race comfortably by a length from Awesome Rock with Leebaz a further 2.25 lengths running third. 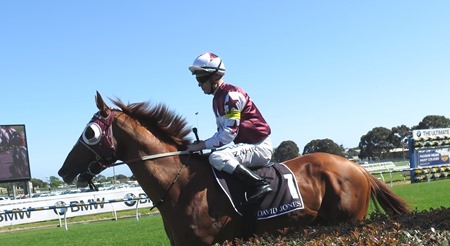 Stratum Star on his way to the barriers 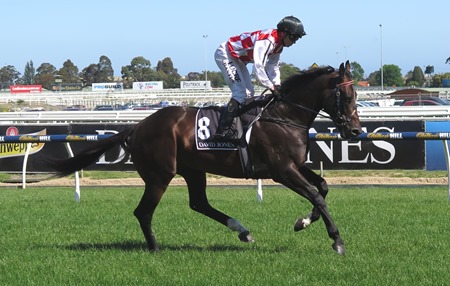 Awesome Rock on his way to the barriers

I hardly took any notice of Race 7, the Group 3 Moonga Stakes which is an open competition over 1400 metres.

It was won by Vashka from Under The Louvre and Coronation Shallan. 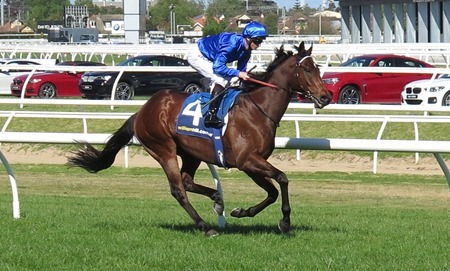 Vashka on his way to the barriers 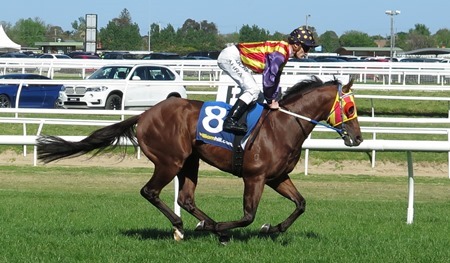 Under The Louvre on his way to the barriers 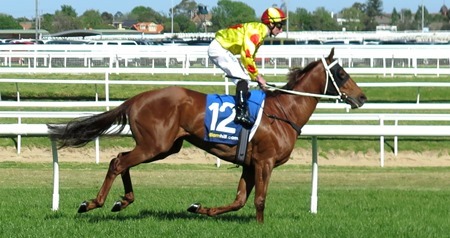 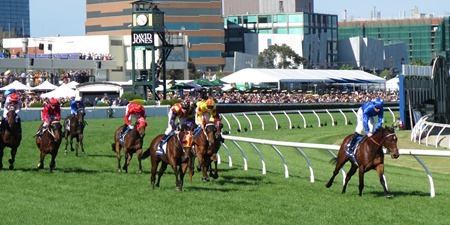 Past the post in the Moonga Stakes – Vashka leads

The afternoon flitted by remarkably fast and there was only one more race before the Caulfield Cup.

This was the Group 2 Tristarc Stakes for mares, and Catkins was the warm favourite.  Alas she didn’t fire in straight, dropping back and finishing 9th. She will  be spelled, and may well have come to end of her racing career, so I’m glad I had the chance to see her in flesh at least once this spring. 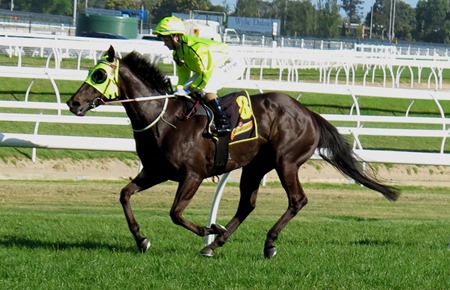 La Passe returns to scale after winning the Tristarc Stakes 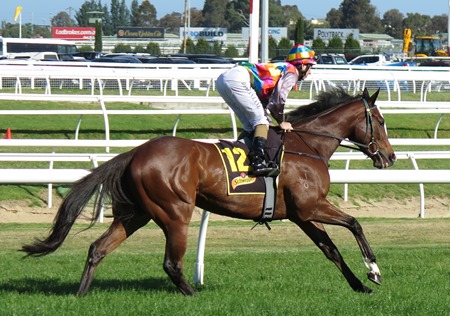 Jessy Belle on her way to the barriers 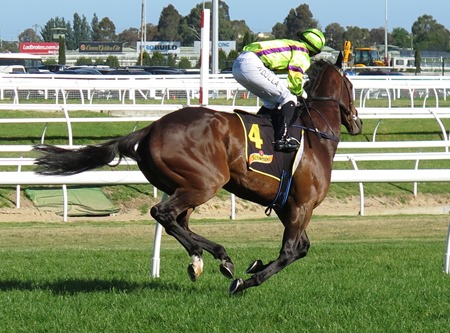 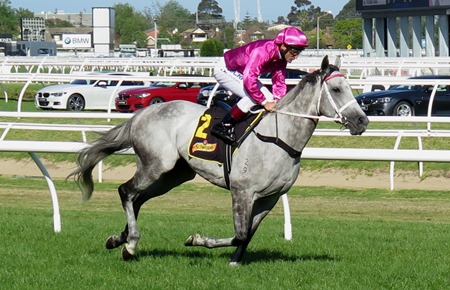 Catkins on her way to the barriers

The afternoon was advanced by the time the Caulfield Cup was due to start.

I decided to go back to the public lawn and grab a spot on the fence for the feature race, so accompanied by my acquaintance and fellow photographer,  Rebecca, we squeezed in to a vacant spot on the fence much to the ire of some persons who claimed they had prior claim to it as they’d had their picnic rug up against the fence all day.

They certainly hadn’t bothered watching the previous races, so we held our ground and they backed off.

On afterthought, we probably would  have been better off back on the hill, as my photographs from the fence turned out dark, the light of late afternoon not being conducive to clear shots. 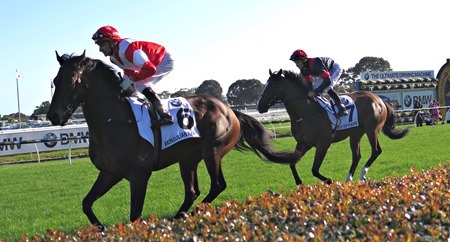 The race itself was worth waiting for. Greg Miles was calling it for the 35th time, but unfortunately ill health got in the way of his delivery. I really feel for him – he must have cringed when he realised his gaffes.

I didn’t really notice it at the time, I was concentrating on the race itself.

Anyway, the call will probably go down in history as one of the most bizarre and unusual race calls of all time.

It was the superbly timed riding of Opie Bosson , and Mongolian Khan’s  staying ability, that won the race.  Opie started his home run early, and the Khan overtook the leaders in the straight and surged on to win by half a length from Trip To Paris who snuck along the rail, with Our Ivanhowe 1.75 lengths back, running third.

It was a popular win by Mongolian Khan as he started favourite and a victory for locally bred horses. Mongolian Khan was born in Tasmania, is trained in New Zealand and is owned by an eccentric millionaire from Manchuria, who keeps wolves as pets. It’s actually Mongolian Khan’s 4th birthday today (19/10/15)

I was personally delighted with his win as my languishing Sportsbet account was augmented by a $25.00 bonus bet being translated into $87.00 winning profit.

Next Saturday is my favourite race, the Cox Plate at Moonee Valley.  Can’t wait!

Love the photos and reviews :) I was at Caulfield for the Cup which I enjoyed - however I was present in a work capacity having travelled from Sydney where I reside. I would dearly like to share some of your content with our readers. Would you be interested ?

Hello Marcus, Glad you liked my posts. Would be only too pleased to have the content shared abroad.