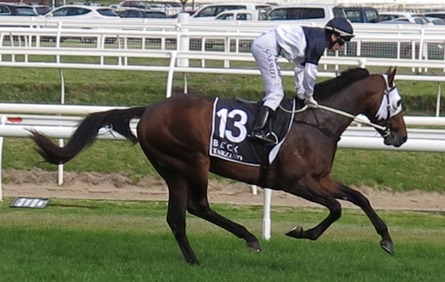 The Melbourne Racing Carnival has only a week left to run, but culminates in suitably spectacular fashion with a concentration of race meetings at Flemington – Derby Day and Emirate Stakes Day book ending the Melbourne Cup and the Crown Oaks over four days.

No doubt the roses will now be in full bloom for Derby Day which kicks off the Flemington Racing Carnival on Saturday.

There’s a wonderful program of racing on the cards, with every race being at Group level, and four at Group 1 level.

The feature race of course is the Victoria Derby, and the other three Group 1 races are the Coolmore Stud Stakes, Mackinnon Stakes and the Myer Classic.

The first of these to run is the Coolmore Stud Stakes for three year olds over 1200 metres. I’m really looking forward to seeing top Sydney colt Exosphere in the flesh for the first time. He has done all his racing in Sydney and won his last three starts, including the Group 1 Golden Rose, so he is the short priced favourite to take out the Coolmore Stud Stakes.

Trying to beat him is a fairly classy field, the most likely contenders being Singapore colt Super One and the local boys Keen Array and Ready for Victory. The omen bet of the day, considering it is All Hallows Eve tomorrow, is Hellbent who could run a place if not win.

Thankfully, the VRC start their race meetings early - the first race is run before midday – and finish at a reasonable time, the feature race being run at 3.50pm and the last race at 5.20pm.

That’s a refreshing change from Caulfield and Moonee Valley whose meetings go on into twilight. It encourages me to get to the track early to watch Race 2, the Group 2 Wakeful Stakes for Oaks bound fillies, run over 2000 metres.

1000 Guineas winner Stay With Me will be taking on the older mares in the Myer Classic, so that leaves a chance for fillies such as Dawnie Perfect and My Poppette  to win some prize money for their connections. Others with a chance are Beluga Blue and Ambience.

Race 5 on the program is the Group 2 Lexus Stakes, the last chance for a free ballot into the Melbourne Cup.  The best chances are Excess Knowledge who has run second in his last two starts, Ruling Dynasty and Junoob.

The Group 1 Mackinnon Stakes (2000 metres) has attracted a quality field of tried and true stayers and middle distance runners that include Happy Trails who is due for his annual win, Pornichet who ran fourth in the Cox Plate, the ever consistent Stratum Star who already has a Group 1 victory ( Rupert Clark Stakes) to his credit, Metropolitan winner Magic Hurricane and mares Rising Romance and Set Square.

And so to the Victoria Derby.

Tarzino is the race favourite, though he hasn’t won a race since September and was beaten last start by the filly Jameka and also failed to run a place in the Caulfield Guineas. Favourites rarely win the Victoria Derby so there are plenty of other smart colts to consider.

I rather like the Western Australian colt Kia Ora Koutou, who has had four starts for four wins in his home state, the last against older horses. His sire Blackfriars won the Victoria Derby in 1999, so he certainly can run the 2500 metres distance.

Others with a chance are Lizard Island, Shards, Get The Picture and Ayers Rock.

The final Group 1 is the Myer Classic for fillies and mares, run over 1600 metres. Some classy mares have won this over the ages, Typhoon Tracy, Appearance, Forensics, Red Tracer, to name a few. Bonaria won it last year from Sweet Idea and Catkins.

Royal Descent is the class mare in the race. It has been some time since she last ran against her own sex, but she has placed many times in Group 1 races in first class open fields and deserves another Group 1 win to go with her ATC Oaks victory in 2013.  If she wasn’t gutted by her run in the Caulfield Cup, she will surely be in the finish.

Her greatest rival in the Myer Classic is 1000 Guineas winner Stay With Me who has an 8 kg weight advantage and has bypassed the Wakeful Stakes to run in this race.

However, fillies have a poor record in the Myer Classic, so other mares who have the class to win are last start winner, La Passe, along with Fenway, Miss Rose De Lago, Solicit and Politeness.

The weather in Melbourne tomorrow is forecast to be overcast and humid, with showers and a possible thunderstorm.  Hopefully the weather will discourage the once a year crowds from taking up all the space on the front lawn.

Last year the weather was similarly damp and it was not quite as crowded as the year before when it was hot and sunny.

It’s sure to be a great day of racing whatever the weather, but it will have to be exceptional to surpass the racing at Moonee Valley last weekend.