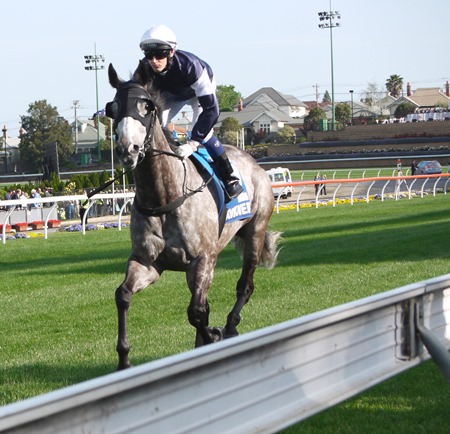 A super race meeting is coming up this Saturday and it is Flemington’s turn to host the first of its Spring meetings.

The feature race is the Group 1 Makybe Diva Stakes (1600 metres) and a full field of smart middle distance runners and stayers has accepted.

Several are having their first outing to the racetrack (other than trials) for the spring. Notable among them are 2013 Caulfield Cup and 2014 Caulfield Stakes winner Fawkner, Australian Derby winner Mongolian Khan, Australian Guineas runner up Alpine Eagle, and ATC Oaks winner Gust of Wind.

They will be racing against others who already have a run under their belt, such as Boban who will be aiming to emulate Dissident’s effort of last year by winning the Memsie Stakes/Makybe Diva Stakes double. He could well accomplish this as he showed two weeks ago that he had returned to form and will no doubt be the favourite.

Fawkner ran second in this race last year, so is a good chance to go one better this year, and Entirely Platinum, whom I tend to overlook, and was runner up in the Memsie Stakes and could prevail this time around.

Apparently there is a bit of a hoodoo, similar to the curse on the PB Lawrence Stakes,  in regard to the Makybe Diva Stakes, where winners of the race tend not to win anything else during the season. There are exceptions of course but they are rare.

I’ll have to get to Flemington early, as Petits Filous is racing in the first race of the program and I really wouldn’t miss her for the world. She is racing against a field of 14 fellow fillies and there are a few that could give her a run for the money – My Poppette and Strykum are her main threats.

It is going to a long day, so it’s fortunate that the race card is interesting with three Group 2 events as well as the Makybe Diva Stakes.

For instance, Race 4, the Group 2 Danehill Stakes (1200 metres) has a super field of three year olds, mostly colts and geldings with one filly.

You’ve got Headwater, the Silver Slipper Stakes winner,  Ready For Victory who just missed out on winning the McNeill Stakes, and the exciting Black Vanquish who is resuming after showing considerable promise in the autumn.

The sole filly is none other than Reemah who was runner up in the Blue Diamond Stakes behind Pride of Dubai and has one win under her belt this spring.

Also in with a chance are recent winners Well Sprung, Kinglike, Brockoff and Puritan.

There are two other Group 2 races, the second these being Race 6, the Bobbie Lewis Quality over 1200 metres.  It has attracted a quality field  with Group 1 William Reid Stakes winner, Lucky Hussler being the top pick.

Rich Enuff will be aiming to redeem his loss to Bounding in The Heath recently. That was run on a soft track, but with Saturday forecast to be warm and sunny, the track will be very good and he could fly.

Others worthy of consideration are Riziz, Gregers, Jabali and Setinum.

The Let’s Elope Stakes, scheduled to run after the Makybe Diva Stakes is worth hanging around for. It is a Group 2 race for mares over 1400 metres. Classy mares like Cosmic Endeavour, Amicus, Vezalay, Tawteen, Noble Protector, Fenway and Madam Gangster are all in the field. A super race is in store, but I’ll be hoping Cosmic Endeavour can show her true colours this time.

In Sydney at Rosehill the Group 1 Golden Rose Stakes is the feature race. There are nine starters and the top picks are Exosphere (who won the Run To The Rose recently) Press Statement (winner of the Group 1 JJ Atkins in winter), and sole filly Speak Fondly who is backing up this Saturday after winning the Group 2 Furious Stakes last weekend.

Catkins also resumes this Saturday at Rosehill in the Group 3 Sheraco Stakes, which she won first up last year. However she will have to beat Bounding who thrashed Rich Enuff  by 4 lengths at her last start.

As previously mentioned the weather in both Melbourne and Sydney will be fine and warm; an indication that Spring has finally come. Both Rosehill and Flemington will have good rated tracks, and I fully expect the racing to be first class across the board.