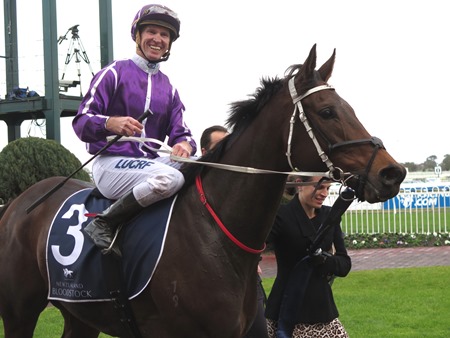 Weatherwise, it was a terrible day for going to the races, with intermittent rainy periods, a cold wind and generally miserable conditions.

I’ve been to the races where it was 40° + and still had a good time, so last Saturday the weather was not enough to dampen my spirits as the racing was pretty interesting throughout.

Reaching Caulfield half an hour before race 4, the HDF McNeil Stakes, so had some time to cruise through the stalls area to see who had arrived.

Unfortunately the misty rain made taking photos rather difficult, but surprisingly most of my snaps turned out alright.

Trackside, most of the front lawn had been fenced off for a special equestrian event running concurrent with the racing program. This featured ex racehorses in an off the track Triequithon competing in trials, including dressage, cross country and show jumping.

Triequithon competitor over the jumps

The horses in this event were beautifully turned out and made a pleasant spectacle to watch between races.

The HDF McNeil Stakes was the first of the Group races on the program and was won by Gold Symphony registering his second win in succession for the season. 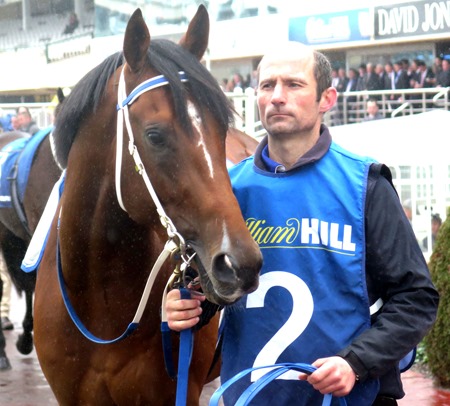 Gold Symphony in the mounting yard 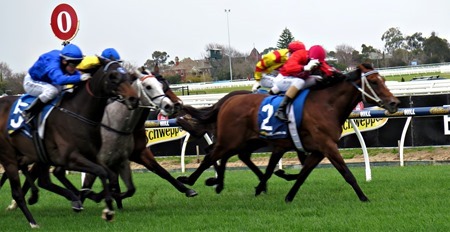 Returning to the stalls area I found several of the horses I had come to see, Cosmic Endeavour among them. 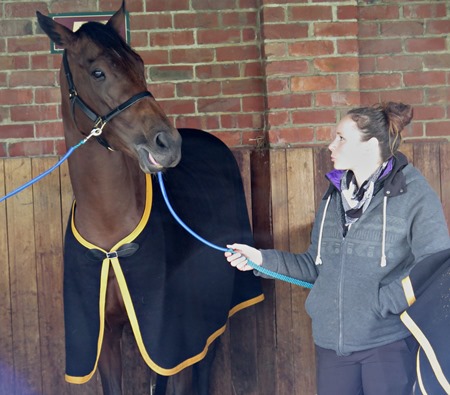 Cosmic Endeavour in her stall

And the Chris Waller contingent were there as well. 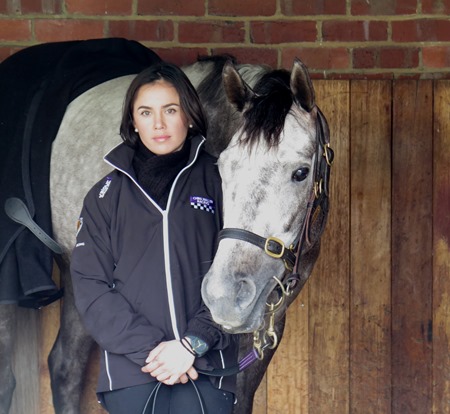 Weary snuggling up to his strapper 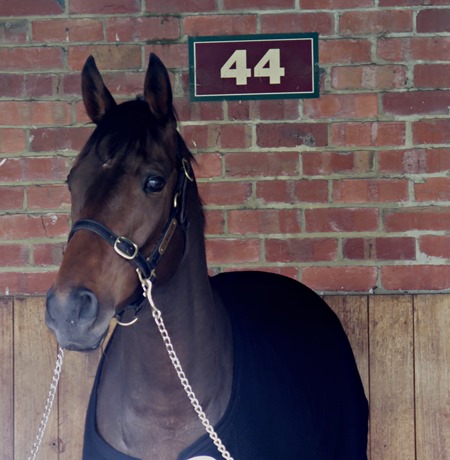 Boban in his stall

For the fifth race I decided to go up the hill and photograph the runners as they returned to scale.

The Shark.com.au Stakes featured Rich Enuff resuming from an injury induced break. He was one upped by former New Zealand mare Bounding who won by 4 lengths. Miss Promiscuity ran third a further 4 lengths behind. 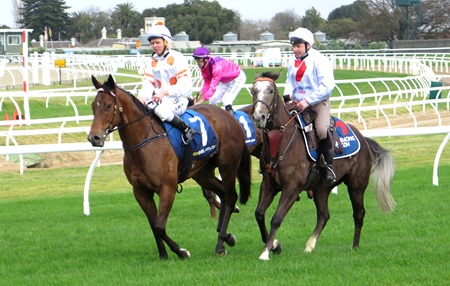 Bounding returning to scale after winning the Shark.com.au Stakes 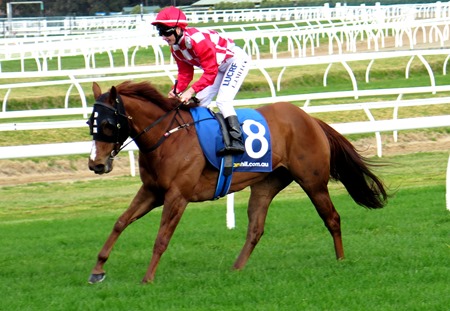 Back in the stalls area Volkstok’n’barrell was being walked. He’s a lovely looking animal – quite the poster boy. 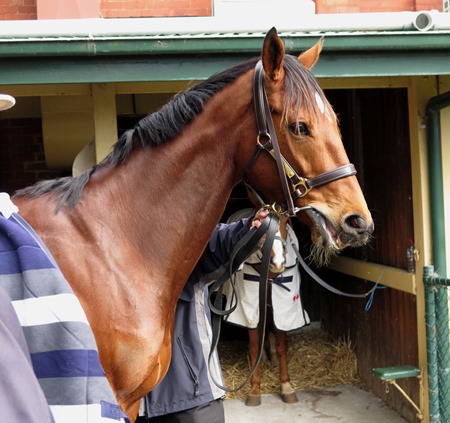 Volkstok’n’barrell posing for admirers in the stalls area.

In the mounting yard, the runners for race 6, the Hocking Stuart Handicap, were parading. 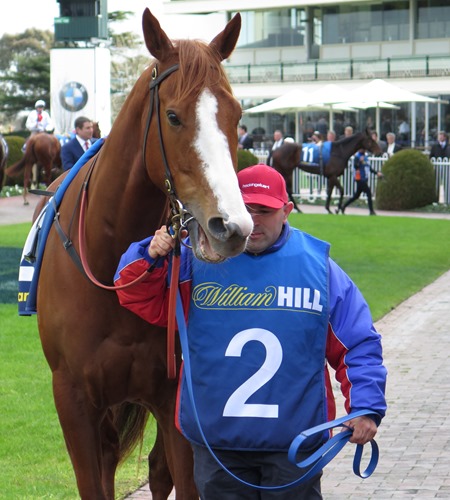 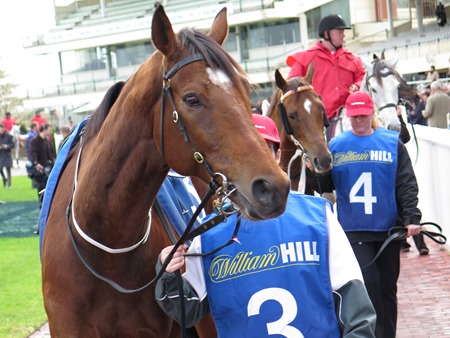 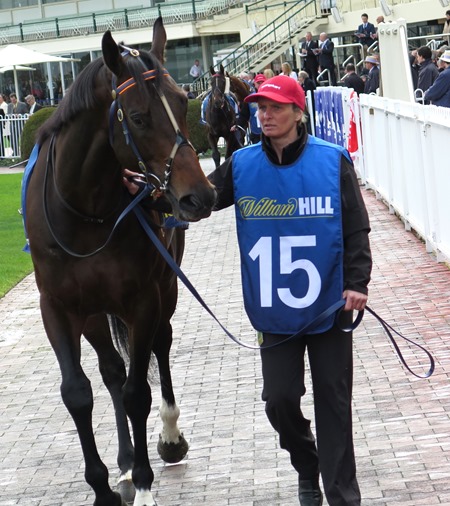 Charmed Harmony led from start to finish and didn’t look beatable at any time, more than validating his favouritism for the event. This race was a sort of consolation prize for him as he was originally entered in the Memsie Stakes. As third emergency he failed to make the field.

Charmed Harmony zooms down the straight with Jacquinot Bay & Awesome Rock in pursuit.

It was freezing cold track side, so I took shelter in the Norman Robinson building and relaxed with a drink before the next race.

The Triequestrian was still in progress and I watched a bit of that while waiting for the mares to assemble in the mounting yard for race 7, the William Hill Sprint Series Heat 1 Stakes. 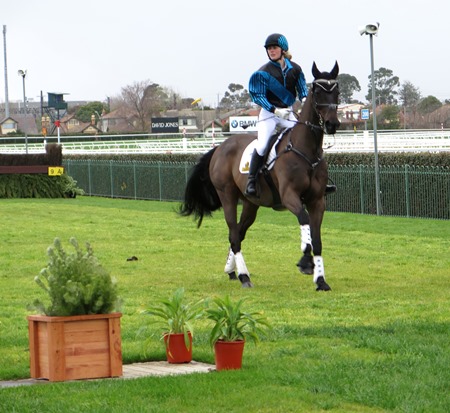 Soon enough the mares arrived in the mounting yard. 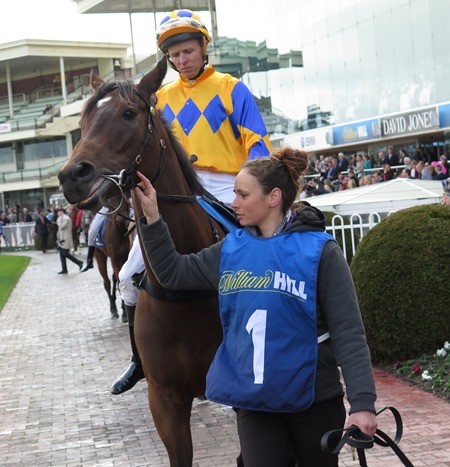 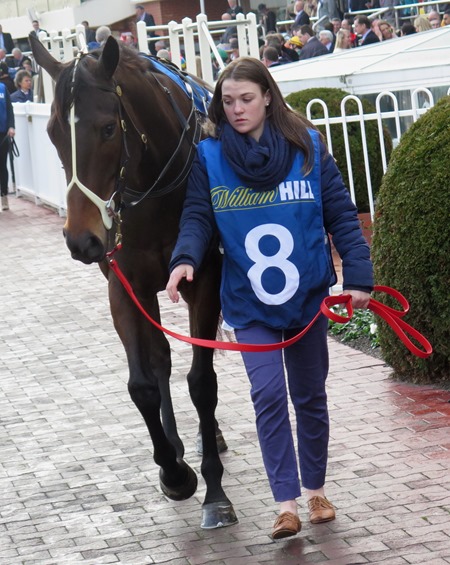 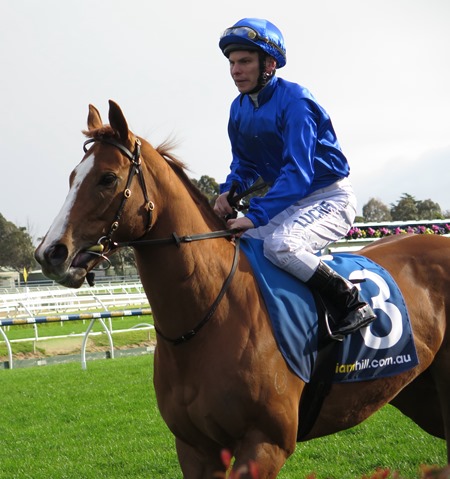 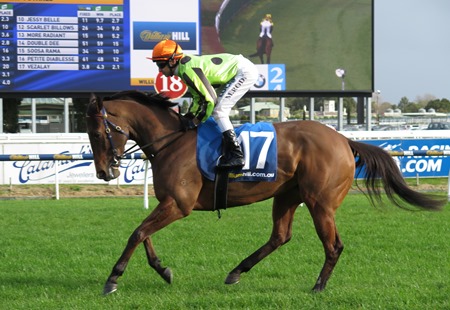 Madam Gangster was underrated in the betting with Vezaley starting as favourite. The race ended in a three horse finish with Vezalay, Hazard and Madam Gangster hitting the line together. The gangster lady got the nod.

100 metres to go and Vezalay is in the lead. Madam Gangster (centre) and Hazard (white blaze) are closing in

Race 8 was the feature Group 1 Memsie Stakes and finally the contenders were assembling in the mounting yard. 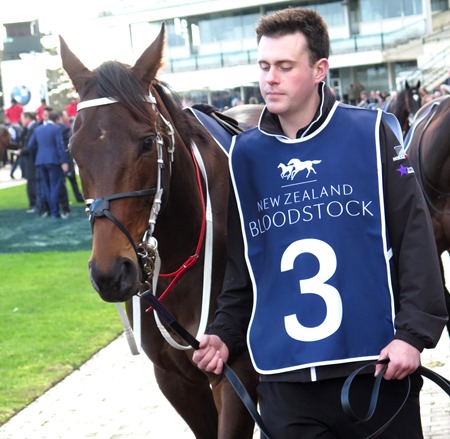 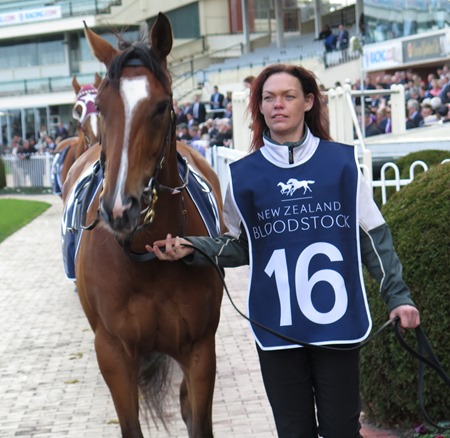 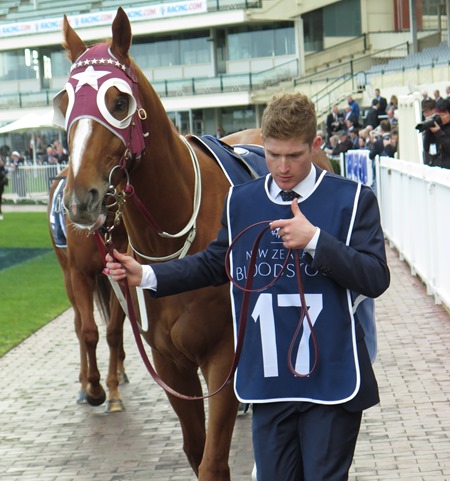 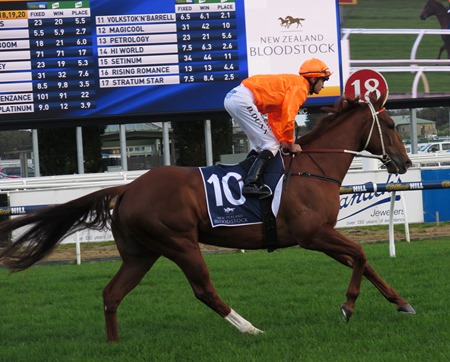 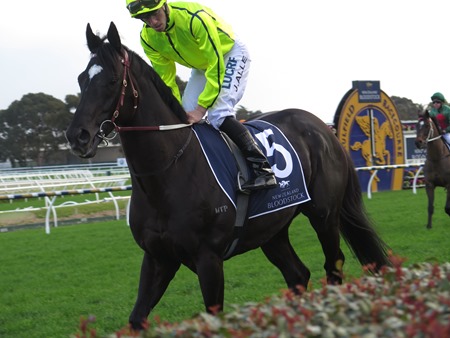 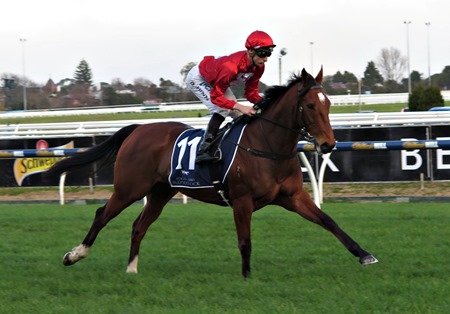 Memsie Stakes up the straight – Entirely Platinum leads with Boban on his inside and Stratum Star just behind them.

I’d had my money on Volkstok’n’barrell and Weary, so didn’t have a collect. I picked the wrong Waller horse.

It is remarkable that Chris Waller has had so many wins at Group 1 level, so it was not surprising that Boban won his stable yet another one.

Will Chris Waller go on to be a great of Australian Racing History like the late great Bart Cummings? There has been plenty written about Bart Cummings since his death on Sunday morning, so I’m not going to add to it.

He was indeed an Australian treasure and a great trainer of stayers and will be remembered, like Don Bradman, for many years to come. Rest in Peace Bart.

Next Saturday the racing action in Melbourne is at Moonee Valley and features the Group 2 Dato Tan Chin Nam Stakes. Looking at the nominations it looks a higher quality field than was contested last year, and includes last year’s winner and runner up The Cleaner and Mourinho.