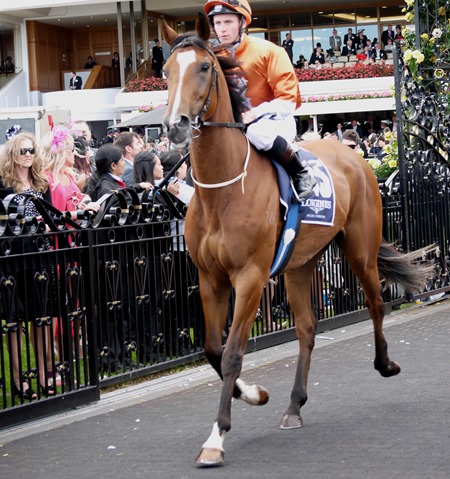 After what has seemed a long wait during an exceptionally cold and miserable Melbourne winter, the promise of Spring brings keen anticipation of  a brand new racing season, along with the warmer weather.

It kicks off this coming Saturday at Caulfield with the Memsie Stakes, the first Group  1 race of the Spring.

A full field will contest the event and includes seven Group 1 winners. Fawkner, originally an acceptor, has been scratched after drawing Barrier 18. I’m disappointed, as I was looking forward to seeing him again. He’ll start his season now a fortnight hence in the Makybe Diva Stakes at Flemington.

The main contenders with Fawkner out are:

- Boban who redeemed an otherwise uninspiring autumn by winning the Doomben 10,000 back in May then followed that up by running second in the Stradbroke Handicap.

- New Zealand bred, Volkstok’n’barrell, winner of the Rosehill Guineas, and fellow New Zealander, Rising Romance, the sole mare in the race, who ran second to Admire Rakti in the Caulfield Cup, and won the 2014 ATC Oaks.

Then there are the old stalwarts like Happy Trails, Temple of Boom, Smokin’ Joey and smart young things like Magicool and Hi World and the other Waller runner Weary.

It being their first start for the season for most of the runners, the result could likely surprise.

As the Memsie Stakes is being run as Race 8, I plan on delaying my arrival at the course until Race 4, otherwise it’s an extra long afternoon.

Fortunately there are several interesting Group 3 events in the interim and the first of these is Race 4, the HDF McNeil Stakes for three year olds run over 1200 metres. Gold Symphony who won the Vain Stakes at his last start has to be one of the main chances as well as Top Me Up who ran second in that race, and Demonstrate who started favourite, but had a torrid run that dashed his chances. But they’ll have to beat the so far unbeaten Prince of Brooklyn kicking off his spring campaign.

However, the sole filly in the field, Stream Ahead, could well trump the boys. At her last start she ran second to the speedy Petits Filous and will have a 2 –4 kg weight advantage over the boys as well.

Race 5, theshark.com.au Stakes sees the return of Rich Enuff who won three successive races in Spring last year before fighting out the finish in the Caulfield Guineas with Shooting To Win, losing by a nose. By all accounts he has trialled really well, so is expected to win this race. He faces seven other competitors, all older and more experienced, the biggest threats being The Bowler and the two mares Bounding and Miss Promiscuity.

I’m really looking forward to seeing dual Group 1 winning mare Cosmic Endeavour making a rare appearance in Melbourne in
Race 7, the Group 3 William Hill Sprint Series Heat 1 Stakes.  She’s up against some smart mares resuming as is she. These include Vezalay (if she gets a run) Madam Gangster, Hazard, Jessy Belle and Griante.

Yesterday the rain bucketed down on Melbourne, and more rain is expected on Saturday, so the track could well be on the soft side, which makes analysing the form all the more difficult.

In Sydney the track will certainly be on the heavy side after the drenching the State received earlier in the week. The feature race is the Group 2 Run To The Rose, for Golden Rose bound three year olds. Japonisme will be aiming to add a fifth win in succession to the picket fence against his name. However, he faces the unbeaten Press Statement winner of the Group 1 JJ Atkins Handicap, so it looks like it could be a fine battle between these two. I like the name of  Raphael’s Cat a colt from Gai Waterhouse’s stable, who has some claims on form.

Last week’s feature race in Sydney, the Warwick Stakes was won by Royal Descent who thoroughly deserved the win, after being so consistent, placing in a number of Group 1 races in the past.