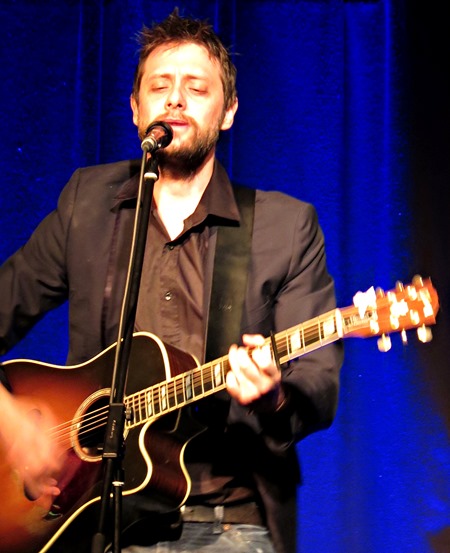 It was great to back in the wilds of Oakleigh at the Caravan Music Club, especially as one of my favourite Australian singer-songwriters was the star act.

I discovered Shane Nicholson way back in 2003 when he opened for a Kasey Chambers concert at the Palais in St Kilda, where I was so impressed by his performance that I sought out his debut solo CD It’s A Movie the next day. I still play it every so often and consider it has weathered the test of time remarkably well.

On Saturday night, Shane was launching his new album, Hell Breaks Loose, which had been released the day before. It has been widely praised by the critics – Rolling Stone Magazine gave it 4 stars – so I was really looking forward to hearing the new songs, and also picking up a copy of the CD at the concert.

The Weeping Willows (Andy Wrigglesworth and Laura Coates), who I recently witnessed opening for Iris Dement, were the support act for Shane Nicholson as well. My impression, seeing them for a second time, was that they had improved and appeared much more confident and upbeat in their performance.

They played a delightfully engaging set, many of the songs being newly composed for their forthcoming second, Pozible crowd funded, record. These included River of Gold, Travelling Man, Forgotten Flowers and Garden of Tears.

It is public knowledge that Shane Nicholson has separated from Kasey Chambers, his wife of six years. Shane claims that the new record is not a “break up” album. He admits that it is heavy in tone, but added that he liked “heavy” and that he was generally happy in his single state.

On Saturday night a number of songs from Hell Breaks Loose were played, but the majority of the 21 song set were either drawn from his earlier albums or covers of other artists.

Shane kicked off his set with new single Second Hand Man, then harked back to his collaboration with Kasey Chambers, singing Wreck & Ruin, the title track from their second joint album. That was followed by a song from Shane’s most recent solo studio recording, Bad Machines, the song being Jimmie Rodgers Was A Vampire.

The show promo advertised Shane Nicholson as appearing with a very special surprise guest.  This turned out to be Melody Pool, whom I have previously seen when she opened for the 2013 Milk Carton Kids concert at Thornbury Theatre.

She added her lovely voice to two of the covers, Stop Dragging My Heart Around, a Tom Petty penned song made famous by Stevie Nicks, and Believing from the Nashville TV Series.  She also sang lead vocals on a new song of her own, Black Dog, a bleak but powerful song about depression. 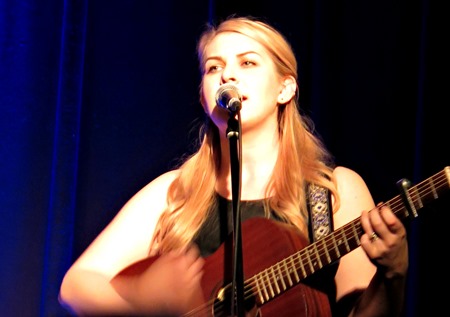 The songs from Shane’s new record sounded fantastic. He has a deft way with words and writes wonderful lyrics. Particularly moving was Single Fathers and Hermannsburg, the latter composed during a visit with his friend, Aboriginal singer songwriter, Warren H Williams in the Outback.

Towards the end of Shane’s set, he summoned The Weeping Willows to the stage, along with Melody Pool and they gathered around a single microphone to sing John Prine’s The Speed of the Sound of Loneliness. 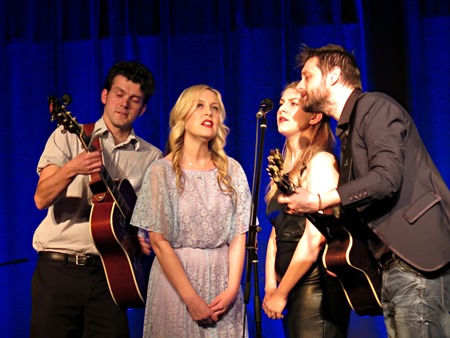 Supporting Shane through most of his set was *John Bedggood who played  tasteful fiddle and mandolin, whilst Shane stuck to guitar and occasionally tickled the piano keys.

As it has been several years since I have seen Shane Nicholson live, it was a rare pleasure to attend the concert at Caravan Music Club. It was a sell out, which must have been heart warming for Shane as I recall seeing him at the now defunct East Brunswick Club back in 2006 where only a handful of people showed up.

He has now won several music awards over the ensuing years, and has finally been recognised as one of the best singer-songwriters in Australia.

I wish him every success with Hell Breaks Loose.

* Thanks to the anonymous commenter for supplying the name of Shane’s support musician.

Thanks for that. I'll update the post with his name.