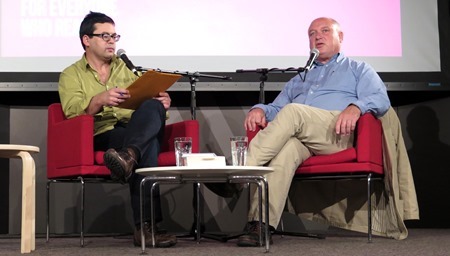 I did not attend the event, but chose to book for a 90 minute session entitled “Ask A Novelist” with Louis de Bernières and Patrick Allington  discussing the subject at the Wheeler Centre on Friday afternoon.

A surprisingly low key affair, it was pretty well attended for a mid afternoon event. I managed to get a seat in the front row, so was well placed to snap a few surreptitious photos.

It was an interesting and entertaining seminar, where Louis de Bernières, an articulate and erudite speaker, explained his writing process in some detail. For instance, he said he tended to write crucial scenes first, no matter where they occurred in the overall layout of the book in progress, and liked to slowly develop the novel as a sort of journey to completion. To illustrate his approach to writing a novel, he quoted the first few lines of Ithaka by Greek poet C P Cavafy:

As you set out for Ithaka
hope the voyage is a long one,
full of adventure, full of discovery.

He is widely travelled himself, having in his late teens spent some years in Columbia South America. This experience and the novels of magic realist writer Gabriel Garcia Marquez influenced his early writing and his first three novels, the so called Latin American Trilogy.

When researching the historical and physical background for his novels, he travels to the locations and gets the lowdown on the history of the place from the locals. He finds inspiration from many sources and his latest novel, the newly published The Dust that Falls From Dreams was inspired by the life of his grandparents.

His best known book is of course Captain Corelli’s Mandolin, a runaway best seller published in 1994.  I have read it, but appear to have mislaid my copy of it. I do have Birds Without Wings, purportedly de Bernières favourite of his novels. I actually wrote a review of it on this blog way back in 2006.

A friend gave me The Dust that Falls From Dreams recently for my birthday, so I’m looking forward to reading it, especially after meeting the author.

There was curious case of synchronicity last night, when I resumed reading The Confusion, book two of Neal Stephenson’s Baroque Trilogy, my current book on the go.

Louis de Bernières at one stage quoted Leibniz; his best of all possible worlds statement.

When I opened  page 646 of The Confusion, what should the chapter quotation be but:

God has chosen the world that is the most perfect, that is to say, the one that is at the same time the simplest in hypotheses and the richest in phenomena.
- Leibniz

My mind was accordingly blown. 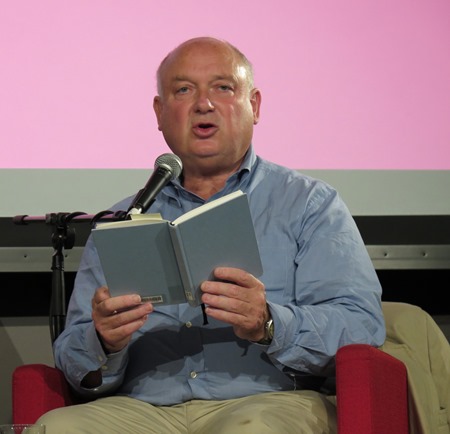 It was an enjoyable seminar and I was pleased that I attended the event, and delighted to have my copies of Louis de Bernières books signed.

I don’t plan to go to many other of the Melbourne Writers Festival events, but have pencilled in Kelly Link on Sunday morning, 30 August. As I have two of her short story collections, which I have read and enjoyed, I’m keen to see her in person and of course get them autographed.