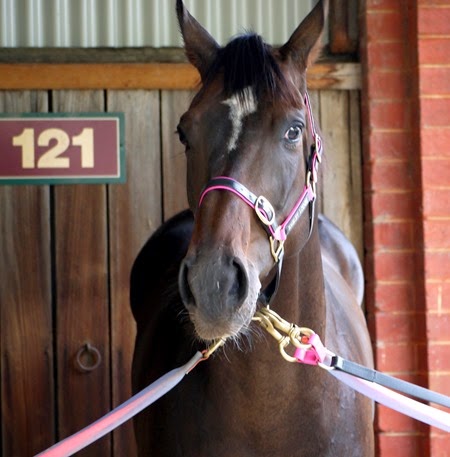 Sertorius – winner of the Easter Cup – in his stall

Sydney experienced a downpour on Saturday that resulted in the cancellation (or postponement) of the Group 1 race meeting at Randwick. It is being run today instead.

By contrast, Melbourne on Saturday was mild and sunny and the track at Caulfield was good and speedy.  It was perfect weather for spending an afternoon trackside, despite the hordes of children in attendance hyped to eyeballs by chocolate treats. There was even an Easter egg hunt for the junior racegoers.

I took my time getting to Caulfield as the races I was most interested in watching were scheduled for mid to late afternoon. So I arrived just after 2.00pm in time for race 4, the Jack Elliott Handicap, an open race over 1400 metres. It was won by Bel Rhythm.

Race 4 – down the straight – Bel Rhythm (no. 8) is about to overtake the leaders

My main reason for going to Caulfield was to see The Cleaner, Disposition and Prince Harada and the only one of the three that won was Prince Harada, having his first start for a year. The break and his gelding obviously did him good, for though he only won by a short margin he looked good doing it.

But I’m getting ahead of myself.

Race 5 was the Geoff Murphy Handicap for three year old fillies over 1400 metres.  I observed the contenders in the mounting yard. 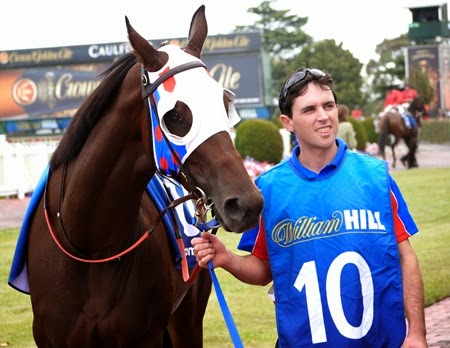 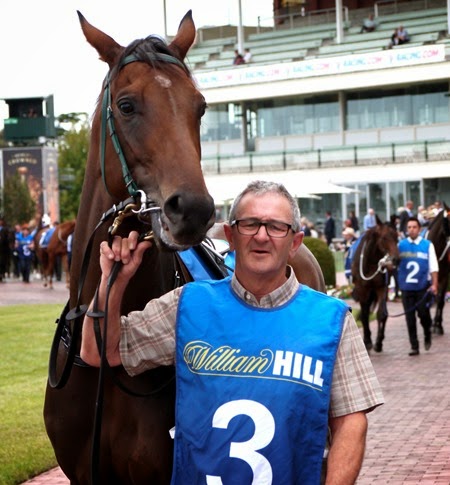 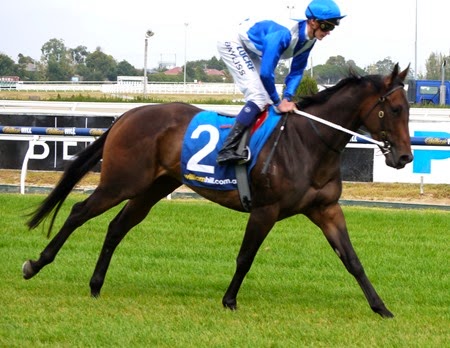 Samartested is a half sister to the 2012 Blue Diamond winner Samaready though she has not shown the same talent as her big sister so far.

Race 5 down the straight – Samartested is about to overtake Japhils

Prince Harada’s race was next on the card, TheShark.com.au over 1100 metres.  He was the short priced favourite and as reported before he won narrowly from early leader Boomwaa with Agent running third. 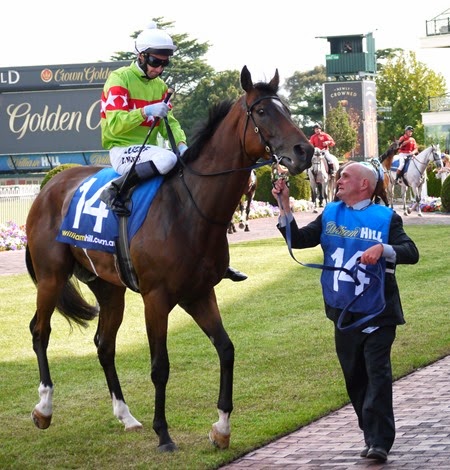 Prince Harada being difficult in the mounting yard 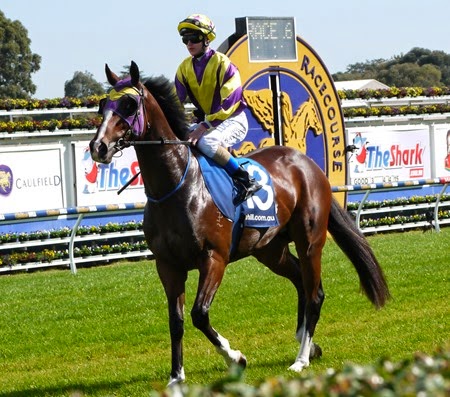 Boomwaa on his way to the barriers 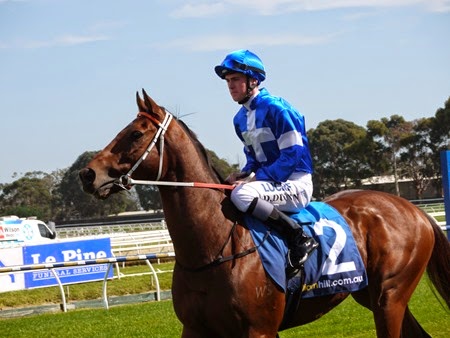 Agent on his way to the barriers

Race 6 – down the straight – Boomwaa leads with Prince Harada zooming down the outside.

As expected, The Cleaner took the lead in the Easter Cup, but he couldn’t maintain the pace and was overtaken by Escado, Sertorius and Shoreham. Sertorius ended up the winner, finally scoring some cred for himself after trying and failing in harder races. 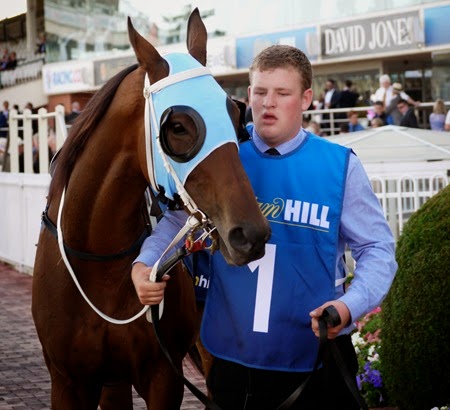 The Cleaner in the mounting yard 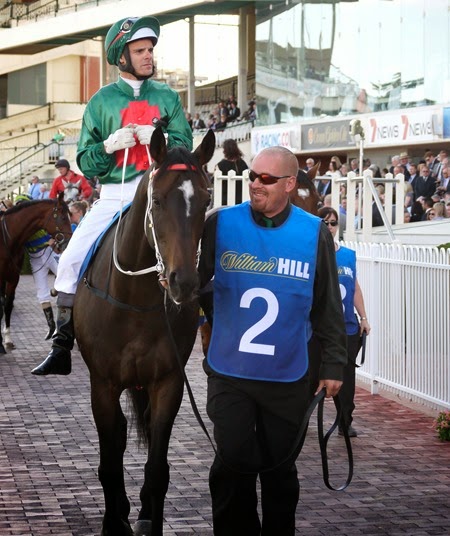 Sertorius in the mounting yard

I felt tempted to go home after the Easter Cup, but decided to stay for race 8, the Victoria Handicap, a Group 3 race over 1400 metres. I was interested in seeing how Disposition would perform. Ironically a fellow Western Australian horse, Waterman’s Bay, won the prize from The Peak and Sistine Demon. Disposition ended up finishing fourth. 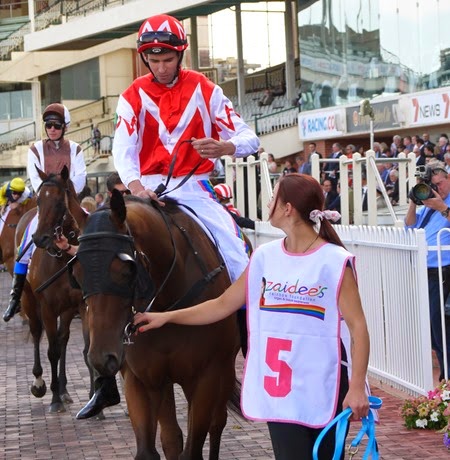 Waterman’s Bay in the mounting yard.

Whilst I’ve been writing this post, I’ve been intermittently watching the races in Sydney. The track was heavy, but the results of the  Group 1 races were not all that surprising.

Pride of Dubai won the Sires from outsiders Odyssey Moon and Rageese who dead heated for second.

The Derby was won by New Zealand Derby winner Mongolian Khan with Hauraki splitting him and fellow New Zealander Volkstok’n’barrell.

Lankan Rupee, though given every chance was unable to feature in the finish of the TJ Smith. Chautauqua won by a nose from Lord of the Sky with Terravista running third.

And the Doncaster was won by three year old colt Kermadec from Japanese horse Real Impact with Royal Descent finishing in third place.

what happened to Pokey LaFarge? it was in my Feed and then I got -

'Sorry, the page you were looking for in this blog does not exist.
Home Subscribe to: Posts (Atom)'

In other news, today I became the happy owner of a house in the heart of Victoria's Western District, the stomping ground of my ancestors married there in 1859.
The home of the first thoroughbred brought to Victoria, King Alfred from the 11th generation of thoroughbreds.

I was trying to update an old Pokey LaFarge post on Windows Live Writer, but it uploaded the post as a new one, so I deleted it. The old post is still there in its proper time slot (March 2014)

I'm currently writing a new Pokey post about last night's show at the Corner Hotel and it should be up later tonight.

Glad you found the house of your dreams (or ancestors).

An WOW regarding the history of King Alfred.