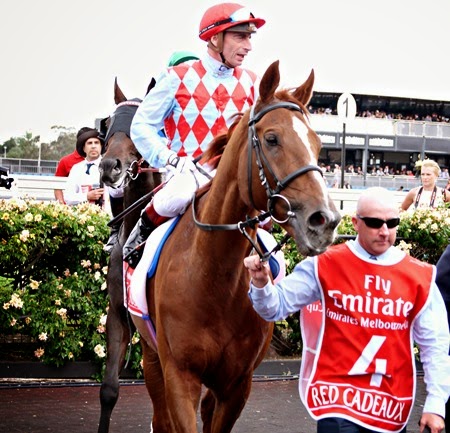 Red Cadeaux – returning to scale after the 2014 Melbourne Cup

The Melbourne autumn racing carnival has been a tad underwhelming thus far, but all that will change this coming Saturday when Flemington hosts a stellar meeting, featuring the Group 1 Newmarket Handicap and the Australian Cup.

Red Cadeaux is a great favourite of the Australian racing public after running second in the 2011, 2013 and 2014 Melbourne Cups, so it will be a rare and wonderful treat to see him back at Flemington in the 2015 Australian Cup.  He’s now 9 years old and has raced in Europe, Asia and Australia over his long career.  Whether he can win the Australian Cup is another matter, as he’s not won over the distance.

His rivals in the Australian Cup include 2014 Melbourne Cup winner, Protectionist who was disappointing in his first run this season over a shorter distance, but may appreciate the rise to 2000 metres . Also in the field is the popular Tasmanian frontrunner The Cleaner, who will no doubt perform that function again on Saturday and be hard to catch.  Happy Trails, Foreteller and Mourinho are the top chances, based on form at the track.

The Newmarket Handicap looks to be a race made in heaven with the world’s top sprinters Lankan Rupee, Terravista, Chautuaqua and Brazen Beau set to clash.  The first three have faced each other previously in the Darley Classic on Emirates Stakes day last spring, where Terravista was the winner from Chautauqua and Lankan Rupee with less than a length separating them in the finish. Lankan Rupee is top weight, carrying 58.5kg, giving his main rivals a few kilos advantage. Brazen Beau, being only three years old is lightly weighted on 52kg and could well upstage his older rivals as a consequence,  especially with champion jockey Joao Moreira on board.  Can the new strategy of running Lankan Rupee off the speed work again?  I certainly hope so.

I intend to arrive early at Flemington on Saturday, specifically to witness Race  2, the Listed MSS Security Stakes, a race for three year olds  run over 1100 metres. Two of my favourite fillies – Earthquake and Sistonic – are part of the large field of 15 runners.  It will be a mad dash down the Flemington straight and I do hope one of the above fillies wins. Also in the picture are Royal Snitzel, Cornrow and Nostradamus as next best dressed.

The rest of the race card at Flemington is fairly interesting – enough to entertain me as I await the running of the Group 1 races. There are three Group 2 races on the program which will be worth watching.

The Living Legends representatives will be Better Loosen Up, who won the Australian Cup in 1991 (one of eight Group 1 wins) and Zipping who won it in 2010.

The weather is expected to be fine and sunny again in Melbourne on Saturday.

Not so Sydney, which has copped a big storm over the past few days which no doubt will affect the track at Rosehill.  The feature race there is the Group 1 Coolmore Classic, a race over 1500 metres for fillies and mares. Hot favourite is First Seal who won the Group 1 Flight Stakes back in spring. She has been penalised with a weight impost, but is obviously the one to beat on form, having won her last start by 2.8 lengths. Her main opposition comes from Tinto, Adrift, Plucky Belle, Arabian Gold and good old Dear Demi.