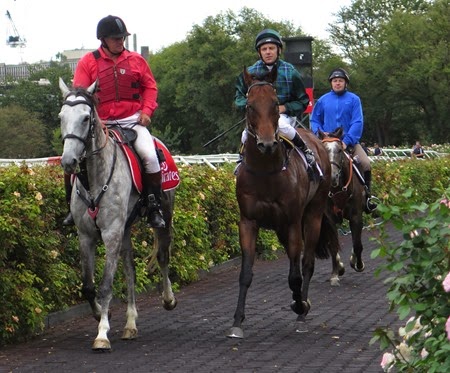 Wandjina returns to scale after winning the Australian Guineas

Today is International Women's Day, and the girls did the gender proud yesterday, in Sydney in the main.

Gai Waterhouse, lady trainer supreme, notched up two of the Group 1 winners – Cosmic Endeavour in the Canterbury Stakes at Randwick and Wandjina in the Australian Guineas at Flemington. She also trained two other winners at Randwick – English in the Riesling Stakes and Vancouver in the Todman Stakes.

The race result that pleased me the most was the win of little Miracles of Life in the Group 2 Challenge Stakes, where she won with ease, beating a classy field of sprinters.

My day at the races was enhanced by the win of Madam Gangster in the Group 3 Frances Tressady Stakes, where admittedly she ended up starting favourite. However I got a good price on her before she became favourite, which paid for my few purchases (a race book and a drink) and a few unsuccessful bets.

I arrived at Flemington in time for Race 3, the Saintly Handicap. I didn’t have a bet on it or the next three races, but watched the Peter Moody trained Orient Line win over Hi World and Maastricht. 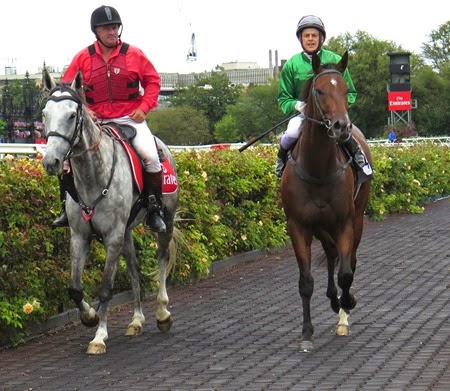 Orient Line returns to scale after winning the Saintly Handicap

After that I went and visited the Living Legends in the stalls area. 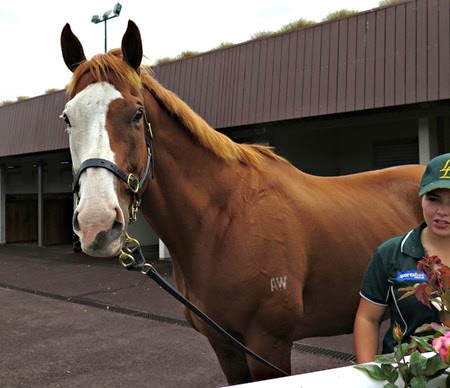 …and Bullish Luck was munching hay in his stall, totally unfazed by the situation. 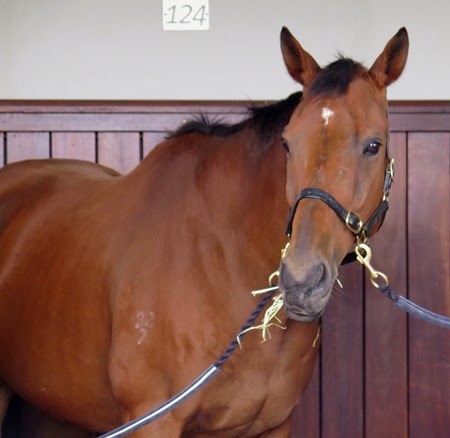 Whilst in the area I checked out the arrivals and came across Tassie horse Admiral in his stall. 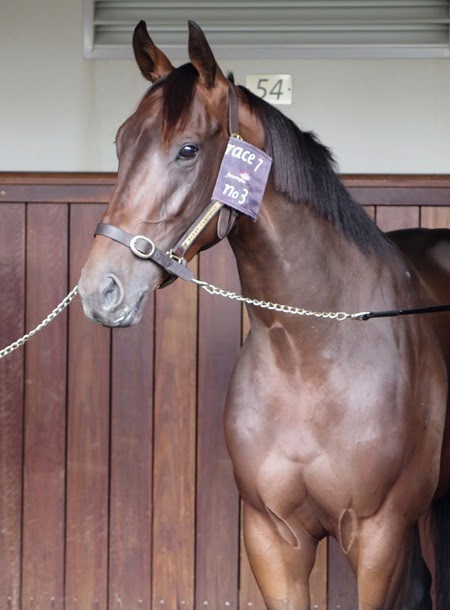 Several other contenders for the feature race were also in attendance… 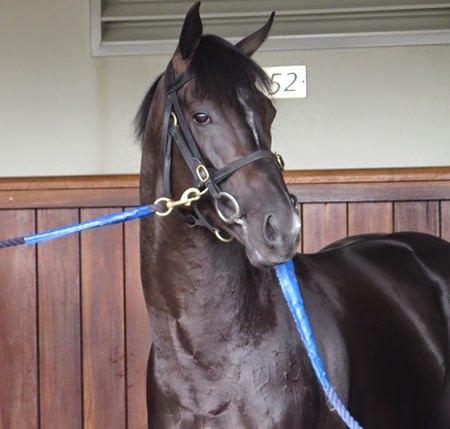 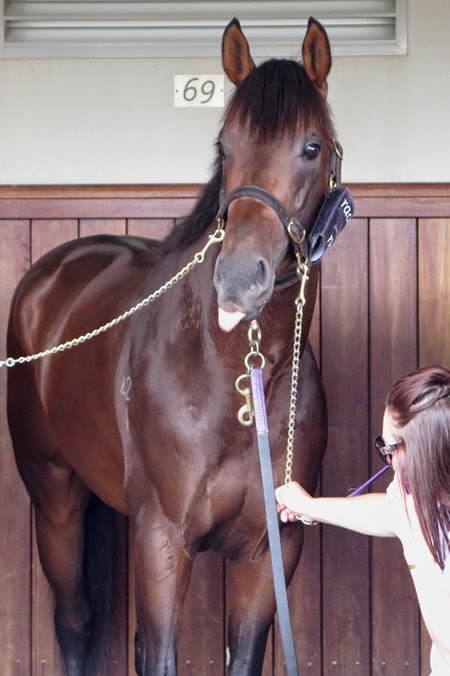 Trackside, the runners were leaving the mounting yard for Race 4, the Group 3 Tab Rewards Stakes. It was won by 10/1 shot Amorino from Aeronautical and Gracious Prospect. 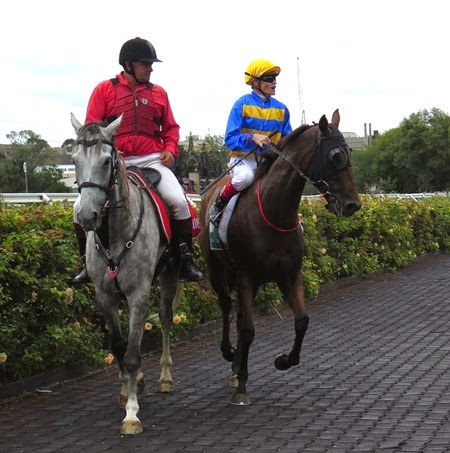 Amorino returns to scale after winning the Tab Rewards Stakes

As I wrote in my previous post, the Flemington support card was not all that interesting, so it was a case of hanging out for the main event.

Race 5 (Roy Higgins Quality) was a race over 2600 metres for old stayers. An old stayer, Crafty Cruiser, was the winner. He hadn’t won a race for seven months. He beat Martinvast by a short margin with Rawnaq a half length third.

Here’s some photos of them in the mounting yard 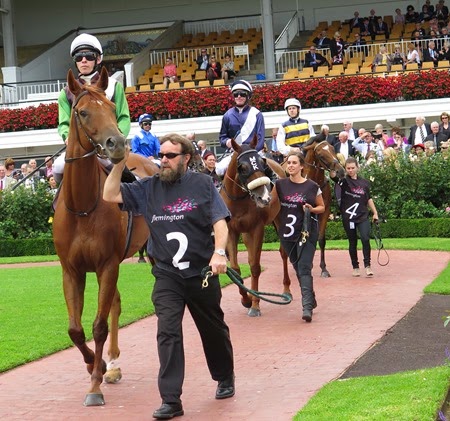 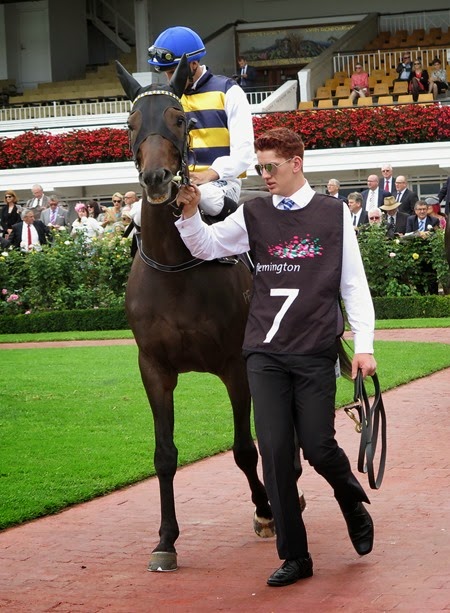 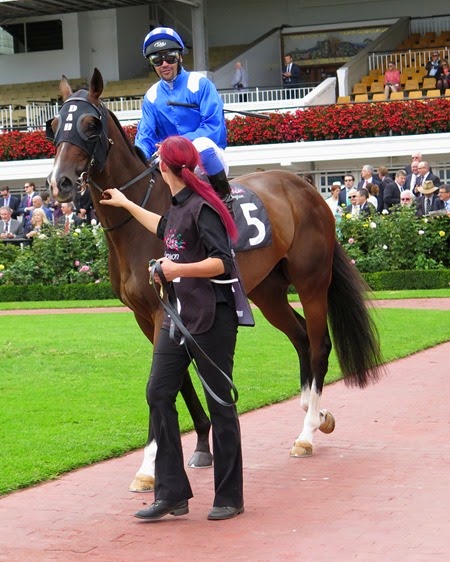 It started to get interesting at the 6th race, the Group 3 Frances Tressady Stakes. For fillies and mares it is run over 1400 metres.

As mentioned before I had a bet on Madam Gangster, having determined on Friday that she was good thing and that her name resonated with me in a positive way.

She won easily, sneaking along the inside and exploding to the front leaving Girl Guide and Nadeem Miss in her wake, winning by 1¾ lengths. That was her fourth win in succession. 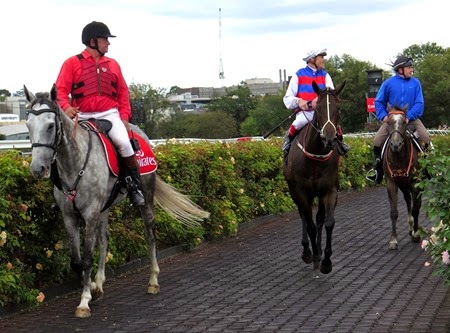 Finally the feature race was due to be run.

I’d watched the Randwick Guineas earlier, and it was a great competition between the top three Sydney colts with Hallowed Crown being the victor. Sweynesse ran second and Shooting To Win hung on for third.

The Canterbury Stakes was run before the Australian Guineas so I took time out to watch it before returning to the public lawn. Cosmic Endeavour leading from start to finish, denied Catkins her first group 1 win. Catkins, ever reliable,  finished second, unable to catch the winner in the straight. Criterion ran third.

The Australian Guineas was the quality race of the day in Melbourne and delivered an exciting finish. Wandjina took up the lead from early in the race, and though Alpine Eagle tried hard, he just couldn’t catch him, losing by a short margin. Stratum Star finished third half a length behind. I had my money on Alpine Eagle for a win only, so didn’t have to hang around for correct weight. 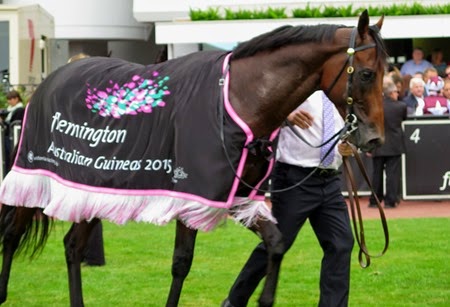 Next Saturday there is more Group 1 action at Flemington with the Australian Cup and Newmarket Handicap being the feature races.  Always a great day, I’ll be there with bells on.