The Sparkle of Diamonds–Group 1 Racing at Caulfield 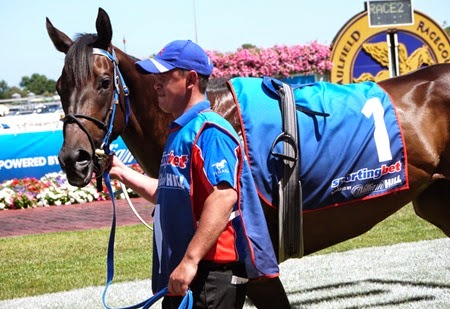 I’ve attended Blue Diamond Stakes Day for the last three years and have no intention of missing this one. It’s always a great day of racing, even though the feature race is the second last on the card.

As it will be a long day, and forecast to be hot, I don’t want to get to Caulfield too early, despite the first two races being quite interesting and at Group 3 level, so aim to arrive in time for Race 3 – the Angus Armanesco Stakes – which is scheduled for 2.40pm.

It’s a Group 2 race for three year old fillies run over 1400 metres.  An attractive field has been assembled that includes the classy local fillies Fontein Ruby, Sabatini and Marple Miss, a visitor from Sydney with excellent form. I’m hoping Fontein Ruby, second up, can win this.  She ran a close third to Sabatini in the Kevin Hayes Stakes a fortnight ago, so could easily turn the tables on her in this race.

Race 4, the Caulfield Autumn Classic is also a Group 2 event run over 1800 metres and is for three year olds of either sex.  The field does not look all that inspiring, but youngsters like Moonovermanhattan, Magicool, Firehouse Rock  and Hong Kong Captain have a good chance to add a black type race win to their records.

The first of the Group 1 races is the Futurity Stakes and programmed as race 5. Run over 1400 metres it is a standard weight for age competition. Dissident is the obvious class horse in the field, so I doubt if any other horse in the field can beat him.  In fact it’s a pretty second rate field, excluding Dissident, with old troupers Smokin’ Joey and Mister Milton making up the number. Entirely Platinum who ran second to Dissident in the Orr Stakes, along with mares Driefontein and Suavito  seem the only other chances.

2014 Melbourne Cup winner Protectionist is the attraction in the Group 2 Peter Young Stakes, though the distance (1800 metres) may be too short for him. Even so,  Fiorente the 2013 Melbourne Cup winner won it last year, so it’s not beyond the bounds of possibility that Protectionist can take the prize this year. The other main contenders are the consistent Happy Trails, in form Jacquinot Bay, and fellow import, Au Revoir, who stayed on after the Cup and won the Zipping Classic.  Real Love the WA mare was disappointing in the Orr Stakes, but on her day is pretty smart in distance races, so I’ll be interested to see how she runs on Saturday.

In contrast to the small field of the Futurity Stakes, the second Group 1 race, the Oakleigh Plate, has a full field of 18 runners.  Last year’s  Blue Diamond Stakes winner Earthquake is one of them and with her light weight advantage could win her first race in open company. The race is run over 1100 metres, so it’s designed for speed. Other contenders with claims are Bel Sprinter who goes really well first up, Flamberge who ran a close second to Chautauqua at his last start in the Rubiton Stakes, Atmospherical who ran third on that occasion, speedy mares Shamal Wind and Vain Queen, and Lord of the Sky who recently won a barrier trial by 8 lengths, but in whom I’ve completely lost faith. He may prove me wrong on Saturday, but I’ll be barracking for Earthquake.

The hot favourite this year, and top pick on form, is Fontiton who has won the fillies Blue Diamond Preview and Prelude and can’t be faulted. She has drawn Barrier 1, either a blessing or a curse. Last year Earthquake won from Barrier 15, but Miracles of Light won from Barrier 1 the year before, thanks to clever rides by their respective jockeys.

Fontiton’s main opposition comes from stable mate Thurlow and the colts Of The Brave, Pride of Dubai and Stoker.

On Friday night at Moonee Valley exciting filly Sistonic is racing in the Group 3 Typhoon Tracy Stakes against a field of fellow three year old fillies.  I’d love to to be there to watch her, but as the race is run at 9.15 pm it’s out of the question with the big race day at Caulfield being the more attractive proposition. However, I’ll certainly watch it online on Friday night.

Warwick Farm in Sydney hosts the Group 1 Chipping Norton Stakes (1600 metres) and its field leaves the Futurity Stakes field for dead with the likes of Boban, Silent Achiever, Lucia Valentina, Contributor, Hawkspur, He’s Your Man and nine others, including Fiveandahalfstar having his second start after a long break.

Contributor who won the Apollo Stakes a fortnight ago is the hot favourite to take this race out. Chris Waller trained horses have won the  Chipping Norton for the last four years. He has 8 runners this year of whom Boban (won last year), He’s Your Man and Weary are his nominated  top chances.  Lucia Valentina has a history of being flat second up and firing third up, and as this is her second start for the autumn. Silent Achiever was a star of the Sydney autumn last year winning both the Ranvet Stakes and The BMW. She ran fifth in the Apollo Stakes, which was a bit short for her, so she could very well win or run a place.

Counting this weekend, there are only three major race meetings   remaining for the Autumn Carnival in Melbourne, so I’m making the most of it while I can.

However, the annual concert season is almost upon us, and so far have tickets for three shows, the first being renowned British singer songwriter Richard Thompson next Wednesday at the Melbourne Recital Centre.