Omen Bets off: A Day for Favourites Instead 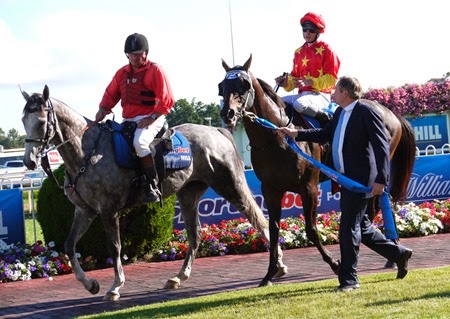 Dissident returns to scale after winning the CF Orr Stakes

It certainly was a long day at the races on Saturday, and fortunately after a wild wet and stormy night, the weather cleared to a bright and sunny afternoon and dried the track to a good racing surface.

Sabatini hits the front , bursting between Fontein Ruby (outside) and Royal Snitzel (obscured)

The interval between races was 35 minutes early in the afternoon so there wasn’t long to wait for the first of the Blue Diamond Preludes to run. Fontiton was the short priced favourite for the fillies event and didn’t disappoint winning by a comfortable margin of 1¾ lengths from outsider Miss Gidget with Flamboyant Lass filling third position. 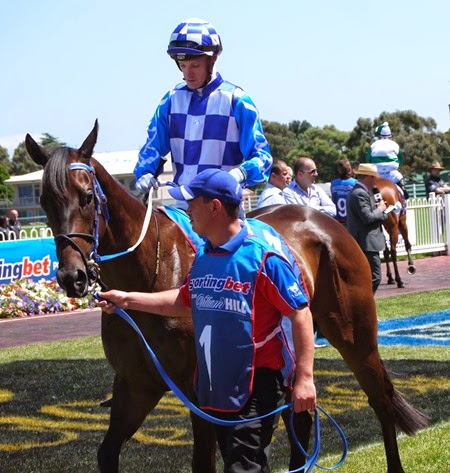 Fontiton in the mounting yard 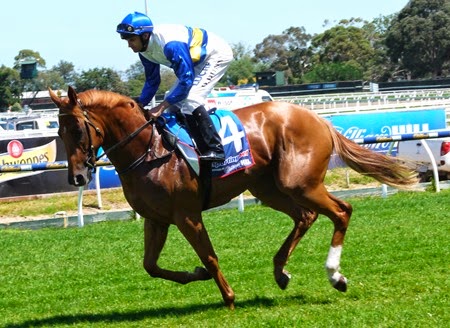 Miss Gidget on her way to the barriers 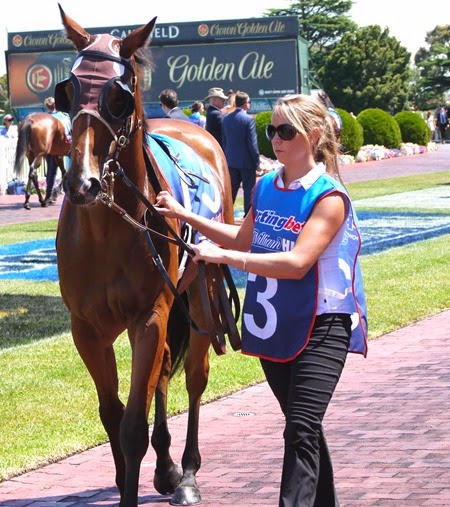 Flamboyant Lass in the mounting yard

Blue Diamond Prelude (fillies) finish – Fontiton (blue checks) is about to pass Miss Gidget in the straight – Flamboyant Lass is a length behind.

Fontiton looks the most likely Blue Diamond winner at this stage. She’s one smart filly and her multitude of owners must consider themselves very lucky to have a share in her.

On St Valentine’s Day it was appropriate that Lankan Rupee, the horse with the heart, would be present for the occasion. He was not contesting any of the races, but there for an exhibition gallop. This was rumoured to occur between the third and fourth races.  However, the presentation for the fillies Blue Diamond Prelude went on so long that it was impossible at that time and took place after race 4.

I caught up with the love horse in his stall… 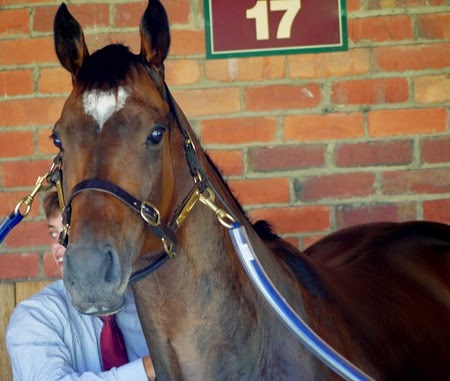 Lankan Rupee in his stall

And later watched his exhibition gallop between races four and five. 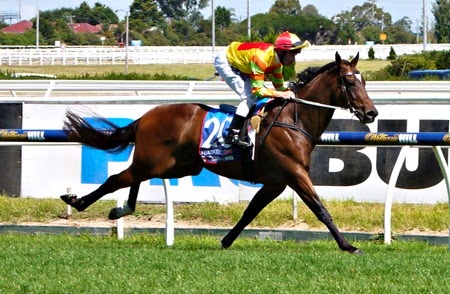 Lankan Rupee charges down the straight in an exhibition gallop.

In the colts and geldings Blue Diamond Prelude  Of The Brave started as favourite and he delivered, though only narrowly. In the straight he looked an easy winner, leading by several lengths, but Pride of Dubai, finishing fast on the outside almost stole the race. It ended up being a photo finish with Of The Brave getting the nod by a nose. 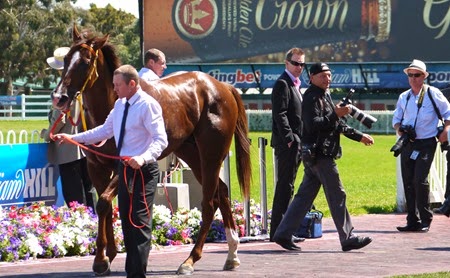 Of The Brave parades after winning the colts Blue Diamond Prelude

Race 5 was the Group 3 Carlyon Cup run over 1600 metres. I was looking forward to seeing the Sydney horse Red Excitement but he had been scratched Saturday morning.  Jacquinot Bay was the logical favourite, but was pipped at the post by Smokin’ Joey. 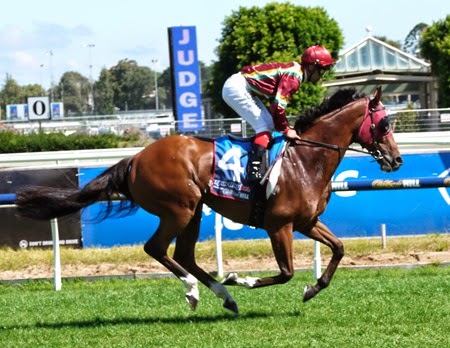 Jacquinot Bay on his way to the barriers 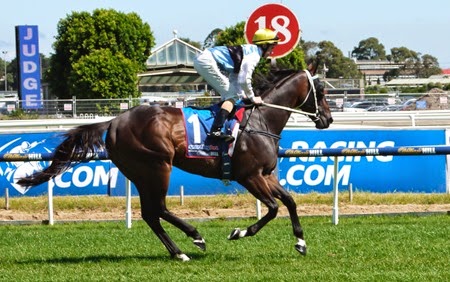 Smokin’ Joey on his way to the starting gates

All eyes were on classy sprinter Chautauqua in the next race, the time honoured Rubiton Stakes. Chautauqua hasn’t raced since finishing second to Terravista in the Darley Classic on Emirate Stakes Day last spring, but had won his previous two starts in sizzling fashion. 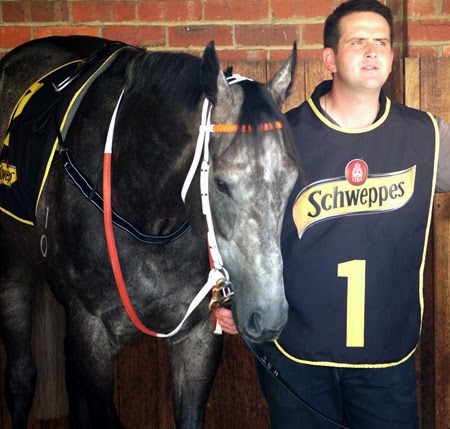 Chautauqua ran at the back end of the field for most of the race and was blocked for a run in the straight. However, once clear,  he stormed down the outside to overtake Flamberge to win by a neck. Atmospherical ran third. 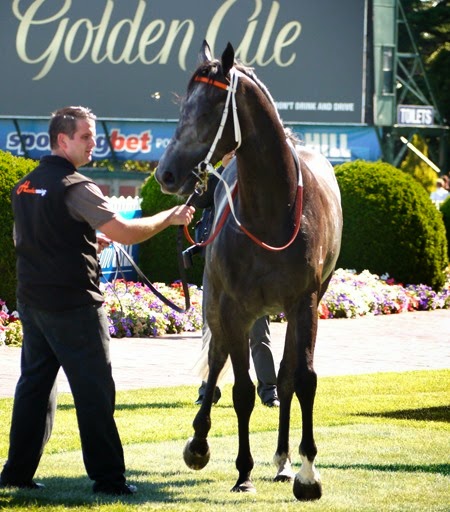 Chautauqua poses for the press corps after winning the Rubiton Stakes

I only had one bet all afternoon, as most of my fancies were the favourites and not worth betting on. I decided I’d have a bet on Hong Kong Captain in the next race, which happened to be the Autumn Stakes.  Profit Share was the favourite, but both he and Hong Kong Captain finished unplaced. Overlooked longshot San Nicasio was the winner with Zebulon and Firehouse Rock filling the minor places. 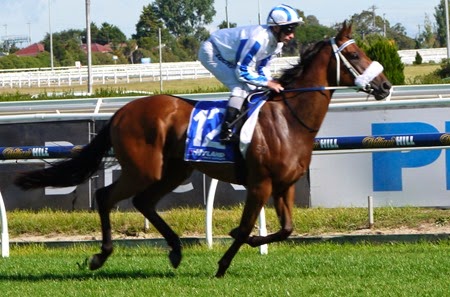 San Nicasio on his way to the barriers

San Nicasio was the first of a double for Peter Moody who has been out of the winners circle recently and Dissident delivered the second.

It was late afternoon by the time the feature race of the day, the Group 1 Orr Stakes was due to start. I must admit I was somewhat wearied by then after being trackside for four hours, so it was a relief to get it over with, though worth the wait. 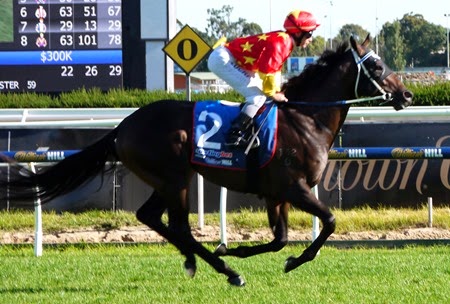 Dissident on his way to barriers

Dissident raced up with the speed in third or fourth spot and came down the outside in the straight to overtake the leaders Java and Entirely Platinum to go on for a solid 1½ length win. Entirely Platinum held on for second and Mourinho ran third.

Orr Stakes finish - Dissident hits the front with Mourinho on his outside and Entirely Platinum (orange silks) on the inside.

As I didn’t bet on the race I didn’t have to hang around for correct weight so headed for the station and home, weary but pleased to have  a Saturday afternoon at the races again.

My next four Saturday afternoons are covered, as the Melbourne autumn racing carnival heats up. Next weekend Flemington hosts the Group 1 Black Caviar Lightning Stakes, where Lankan Rupee will be contending with a classy field of pretenders to the title of top Australian sprinter. The so far unbeaten Deep Field is one of them and Coolmore Stud Stakes winner Brazen Beau is another. It promises to be a great race.

I sporadically watched the Sydney races at Caulfield when I remembered to do so, and the results were less reliable than those in Melbourne. Contributor won the Apollo Stakes and 50/1 shot Adrift stole the Light Fingers Stakes from second favourite First Seal.

I was however pleased with the result of Sydney race 3, as I’d had a bet on Haptic on my online Sportsbet account and he payed very well, boosting my ailing account to a respectable amount, plus giving me a bonus $10.00 free bet to use at my leisure.

None of the Valentine’s Day omen bets came anywhere – all finished unplaced. I didn’t hazard a wager on any of them I should add.