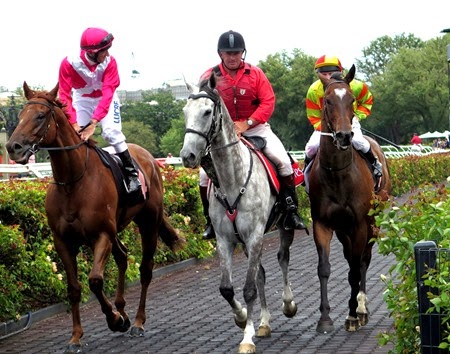 It was a day of weird weather, chaotic public transport and fabulous racing action, capped by the stunning victory of Lankan Rupee in the feature race.

Due to several events coinciding on Saturday – White Night, Cirque du Sol, Soundwave Festival and of course the Lightning Stakes meeting at Flemington - public transport was disrupted. When my local train arrived at Flinders Street Station I was expecting to step onto a Flemington Racecourse train on another platform as usual.  I was obliged to catch another train to Southern Cross station and link up to the racecourse train there. I found it on Platform 8A  and hastily boarded, only to have the train sit idle for another 15 minutes before it departed.  Coming home was hellish, but more about that later.

So I was rather later arriving at the track than I anticipated. I did manage to get there in time to watch race 3 The Vanity, and get some photos of the field. 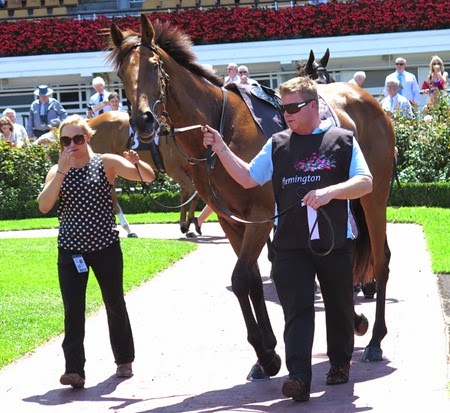 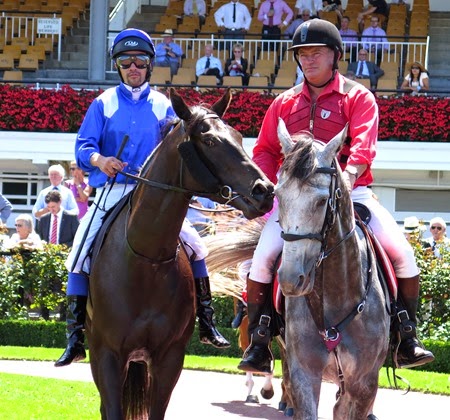 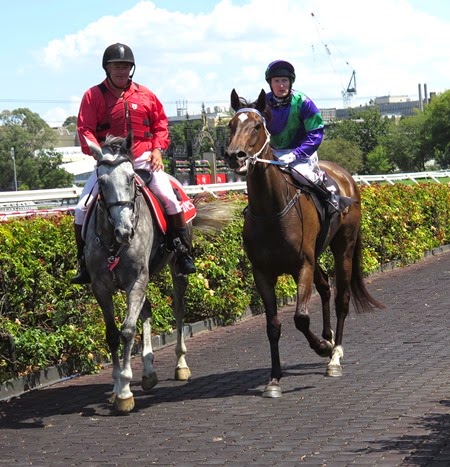 Sweet and Speedy – the winner -  returns to scale

After that race I headed to the stalls area to see who had turned up.

I found WA colt Disposition in his stall… 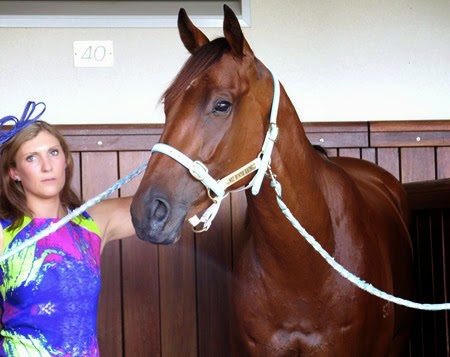 …and Tawteen who was being prepared for the next race 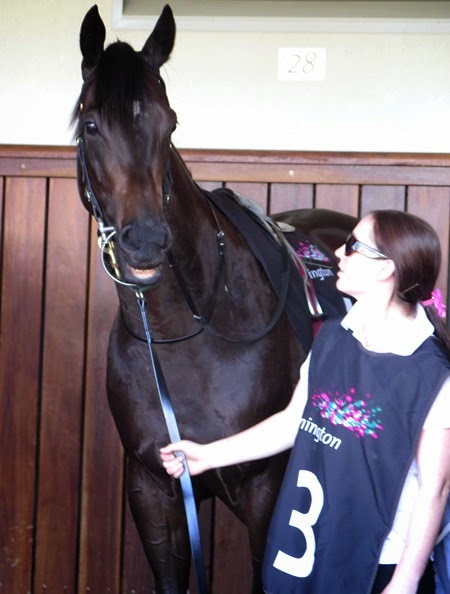 Race 4 was the Indian Summer Handicap and I was expecting Tawteen to at least run a place, but she faded in the straight and finished 7th. The winner was Chloe in Paris. 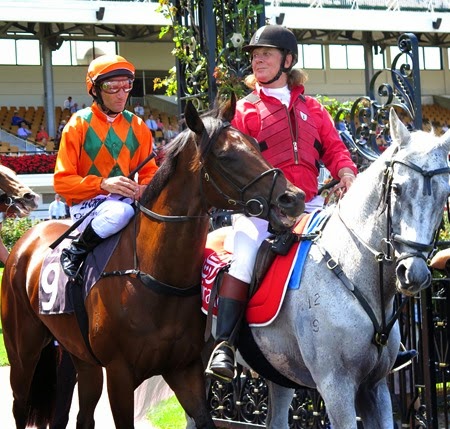 Chloe in Paris leaving the mounting yard for the track 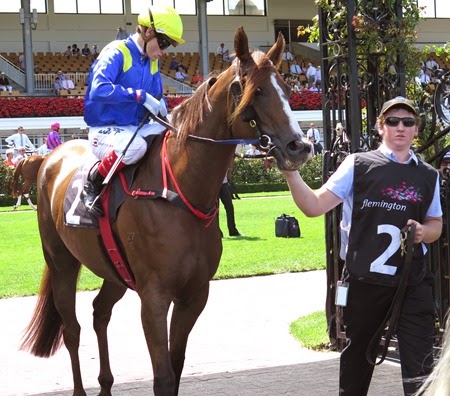 Sweet Emily on her way to the track

The early part of the afternoon was hot and sunny, before clouds started to build up over the course. It was a welcome relief to have the sun obscured but it was still very humid and oppressive.

Back in the stalls area, a number of new arrivals were waiting patiently in their stalls. Naturally I made sure to visit Lankan Rupee who was looking a picture of health. 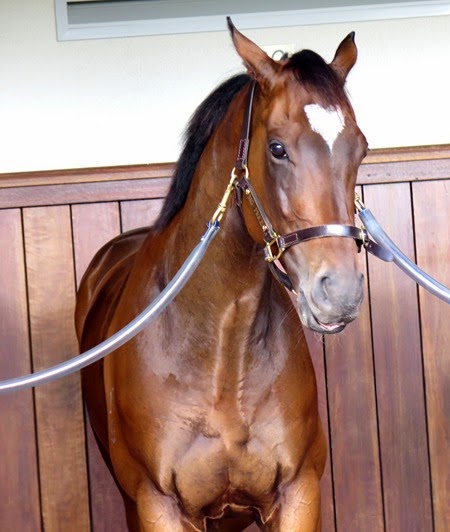 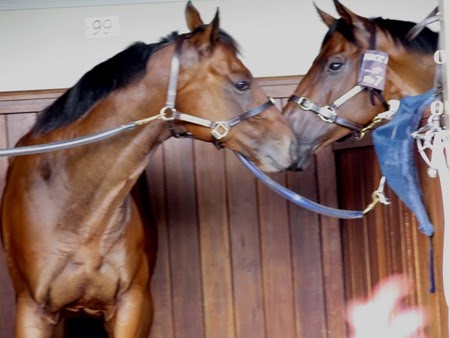 Lankan Rupee with  Dany the Fox

A few stalls away, Deep Field had quite crowd of admirers in front of his stall. 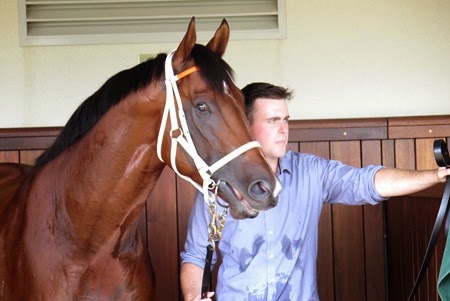 Deep Field in his stall

Brazen Beau was close by looking as handsome as ever. 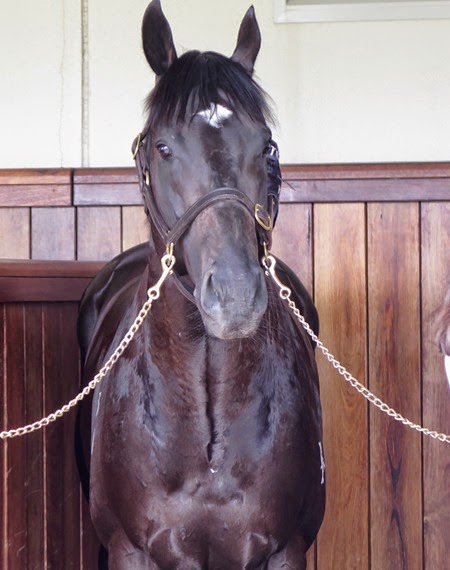 Brazen Beau in his stall

I also went and visited Silent Witness, the Living Legends representative for the afternoon, and gave him a pat as he grazed on the rose bushes. 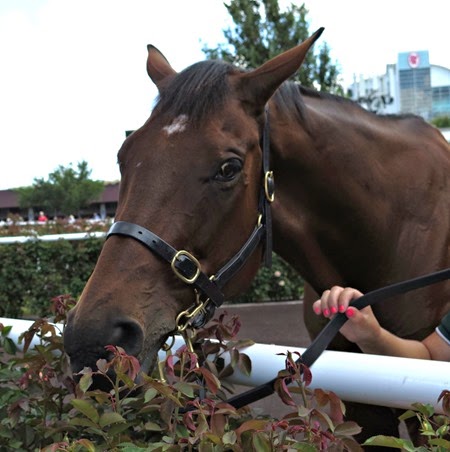 The fifth race on the program was the Lawn Handicap an unlisted race over 1400 metres.  I made it back to the public lawn in time to watch the race. It was won by Gracious Prospect with Swift Shadow and Amorino running second and third. 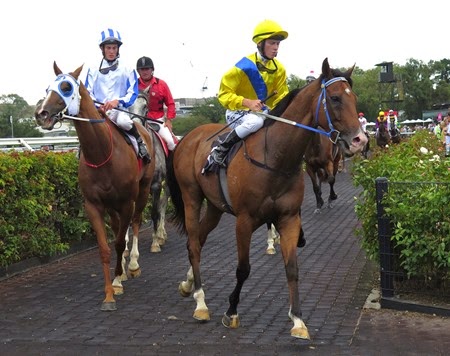 There was only one more race before the Lightning was due to run. This was the Group 3 CS Hayes Stakes for Guineas bound colts and geldings.

Disposition was the favourite, but he was denied victory by the Gai Waterhouse trained Wandjina winning by a narrow margin. Stratum Star ran third.

Here are some of the contenders in the mounting yard 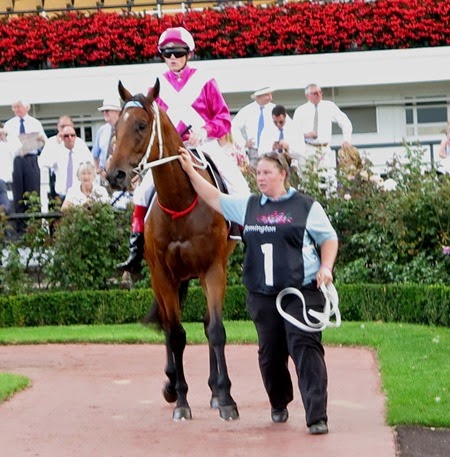 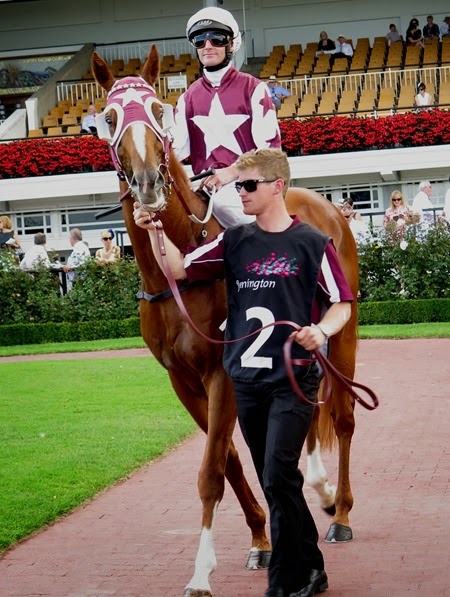 Wandjina – ear muffs and all 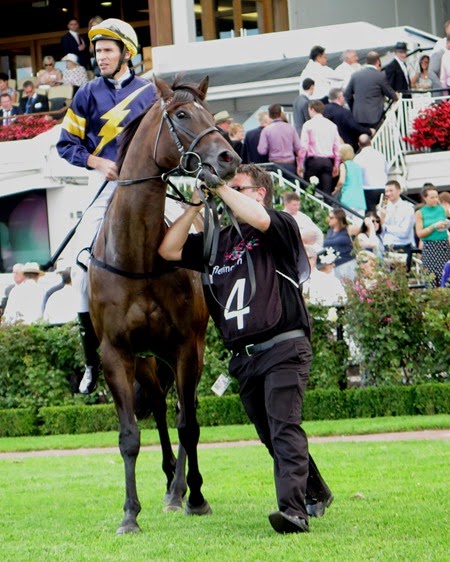 A big dark cloud had by this time gathered over the course and the odd drop of rain was falling as lightning flashed and thunder rolled. Quite ironic really considering that the Black Caviar Lightning was up next.  There was a glitch in the video coverage caused by an electrical disturbance, so the feature event was delayed until the storm had passed. 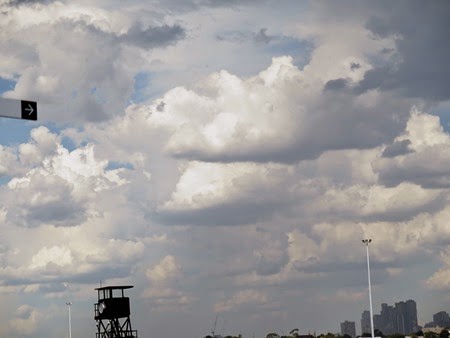 Sky over Flemington at around 4.15pm

The storm mostly bypassed Flemington as the city and northern suburbs were subjected to a torrential downpour with only a passing shower hitting the course.

Anyway it was finally time for the race we had all be waiting for, the famous 60 second dash down the straight.

The horses had no sooner entered the mounting yard than they were mounted and heading for the track. 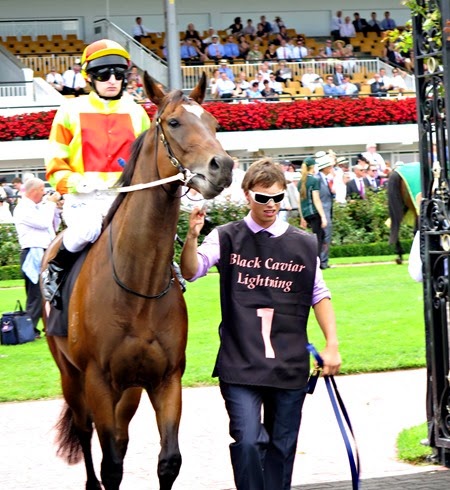 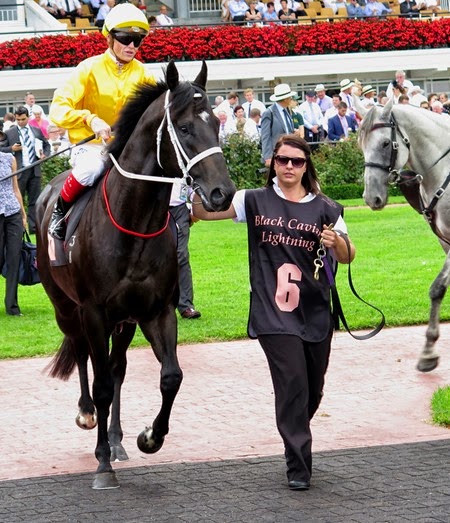 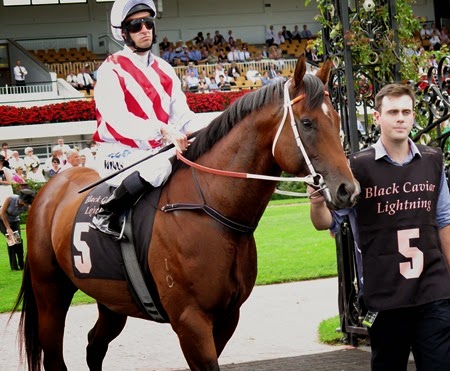 Lankan Rupee’s trainer, Mick Price, stated several days ago the he was training the horse to take a sit during a race to conserve his blistering sprint until the end.  Previously his pattern was to race on the speed and was therefore left a sitting duck as back markers swooped and overtook him. This is what happened in the Darley Classic last Spring when he finished third behind Terravista and Chautauqua.

Deep Field started as favourite for the Black Caviar Lightning, but had his colours lowered, being left wanting in the straight.

I was delighted with Lankan Rupee’s win, though I didn’t have any money wagered on the race.  The new race tactics worked a treat courtesy of the superbly timed ride of Craig Newitt, who made a special trip from his current residency in Singapore to ride the beautiful horse with a heart. 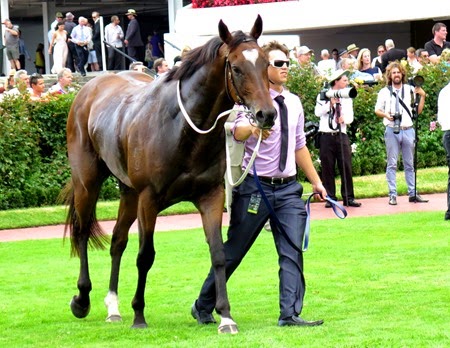 Lankan Rupee parades in the mounting yard after his win

Lankan Rupee’s next assignment is the Newmarket Handicap on
14 March, a race he won last year.  It will also have a top class field. Can Lankan Rupee turn the tables on Chautauqua and Terravista this time?

Throughout the afternoon I took time out to watch the race action in Sydney and was pleased to see Catkins win the Millie Fox Stakes from Plucky Belle and Avoid Lightning.

I left Flemington after the Lightning Stakes and made it back to Southern Cross station. I should have caught another train to Flinders Street, but decided I would tram it the rest of the way home. This was a mistake, as I’d forgotten all about the White Night, and trams were few and far between, most of the central CBD being blocked to traffic.

Signage or information on tram movements was non existent.  In the end I caught a tram to the corner of Queen and Bourke Streets, then walked to La Trobe Street in the hope of connecting with an 86 tram to take me home.  I eventually found out that 86 trams were only running from the Nicholson and Gertrude Street corner.  So I caught a tram in La Trobe to Nicholson Street and walked to Gertrude,  finally managing to board the 86 tram and get home almost two hours after leaving Flemington race course.

Next week the racing is at Caulfield and features the Blue Diamond Stakes and two other Group 1 races, the Oakleigh Plate and Futurity Stakes.

The racing action intensifies from now on in both Melbourne and Sydney as the Autumn Racing Carnival gears up for the Sydney Championships and in Melbourne, the Australia Cup.