A Family Affair at Moonee Valley 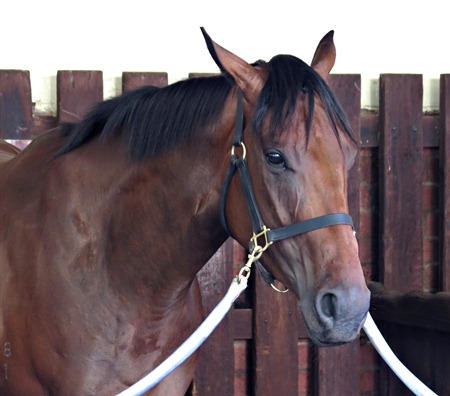 Sistonic in her stall at Moonee Valley on 30 January 2015

On the 15th January this year, a three quarter sister to Black Caviar had her first start in a lowly race at Sale. Her name is Sistonic and she is by Bel Esprit from Danavia who is the sister of Helsinge, Black Caviar’s dam.

Sistonic won that race by 4½ lengths from Blocker Dee with apparent ease. Blocker Dee franked that form by winning his next start by the same margin.

So there was quite a flurry of interest in Sistonic  having her second start in a city race. Naturally I was curious, as I’d watched the footage of her Sale race and thought her win impressive, so I went along to the Moonee Valley race meeting on Friday evening ostensibly to see her in action.

I arrived early so I could get to see her close up in her stall. As an added bonus in the stall adjacent to Sistonic was Tawteen who I was also interested in watching in the 955 metre 55 second challenge.  She’s a lovely dark brown, almost black, filly with a white diamond on her forehead. 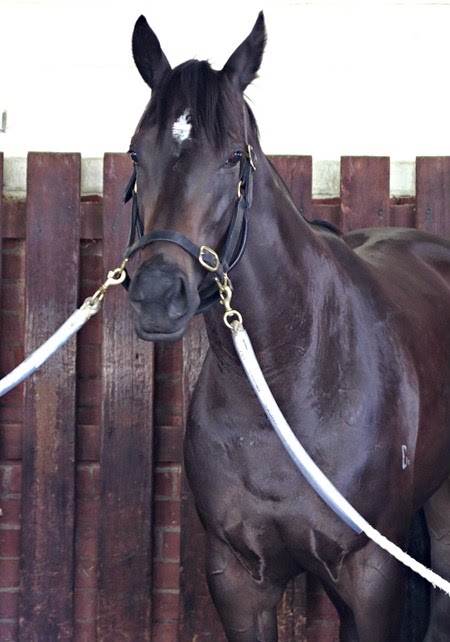 A couple of stalls up from the two fillies was Hay One, the full brother to Black Caviar’s great rival Hay List. He’s a very big young horse, like his brother, but is yet to win or even place in a race from five starts. 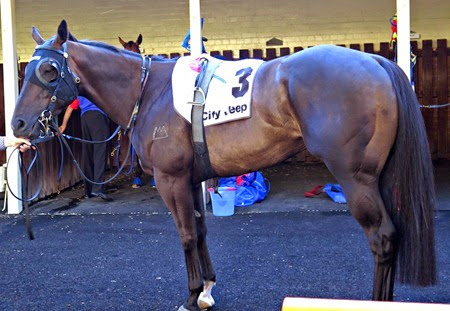 Hay One saddled up for the McMahon’s Dairy Plate, the second race on the program.

I watched race 2 from the fence. It was won by the favourite Miniver from Avalon Downs and Any Glory. Hay One finished second last. 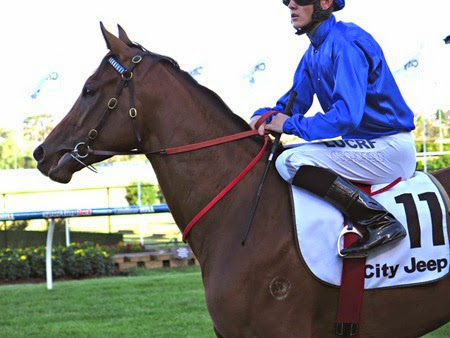 Miniver on her way to the barriers before winning the McMahon’s Dairy Plate.

The next race, the Reg Delaney Memorial Handicap was the one I had come to see with Sistonic starting short priced favourite.  Run over 1200 metres Sistonic was up against seven fellow three year old fillies. She breezed to a win after leading the charge from start to finish. She won by ¾ length from Distraught with Zambezi Diamond running third.  It doesn’t sound like much of a margin, but she was eased approaching line and still made it look effortless. Her jockey was admonished after the race for pulling her up too soon, because if let run at her high cruising speed she would have won by a couple of lengths.

It was all very reminiscent of Black Caviar’s early races, so it will be exciting watching her from now on. 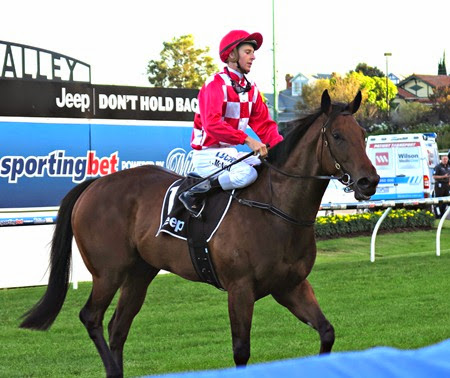 She is a big strapping filly like her big sister and has a calm temperament by all accounts. She certainly looked calm and collected in the parade ring before the race as if she’d been going to the races for years.

As you can see it was still daylight during the first three or four races, but the shadow cast by grandstand over the track made it difficult to get clear photos.

Race 4 was the Jeep 55 Second Challenge run over 955 metres. The 55 second challenge is a series of 16 pure speed races run at the Moonee Valley night meetings over summer, the object being to break the 55 second mark over the distance.  The trainer of the horse that runs closest to the 55 second mark over the season wins a jeep. Last Friday night Moonee Valley were offering half priced schooners if the winner completed the race under 56 seconds. The current fastest time is 55.08 held by Beach Front who was one of the field last Friday.

Tawteen started as warm favourite, kicking off her autumn season in the race.

It certainly was a speedy race and Tawteen, flashing from the barriers, led from start to finish, winning by a length from Settler’s Road with Beach Front running third. Tawteen’s time was 55.76, so the patrons could at least enjoy cheap schooners, though Tawteen’s trainer David Hayes was out of luck as far as the jeep was concerned.

Tawteen flashes down the straight with Beach Front in hot pursuit. 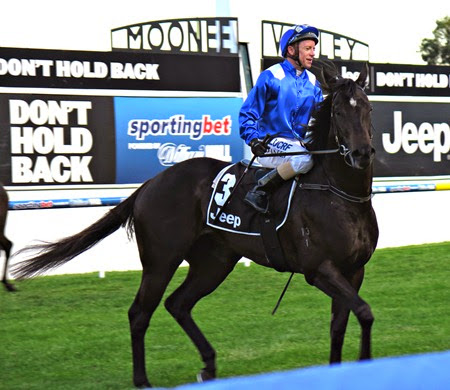 Tawteen returns to scale after winning the Jeep 55 Second Challenge.

I called it quits after that race and made my way to the bus stop to await the last bus home, pleased to have been present to witness a possible future star of the turf in action. Whatever,  I’m hanging on to the race book in case Sistonic matches the achievements of her big sister,  in which case it will be worth a lot of money in the future. Black Caviar’s early race books sell for a goodly amount on Ebay.

poor Hay might just need a Trainer with a different style.
Sistonic is a great name.
Re the return-to-scale image: Jockeys torture their bodies as much as ballerinas. I don't like to think about their old bones as I have my own aching after far less trauma.
Glad you had another lovely day at the track.

I fear Hay One hasn't the talent of his brother, though you may be right in that he needs a different trainer to find what makes him tick.

I'm looking forward to Sistonic's next race which will purportedly be at Moonee Valley again at the end of Feb. She had no problems at all at the Valley, whizzing around the tight corner into the straight like a professional.

Agree re jockey's aching bones after the stress of riding for years and the injuries they sustain in the practice of their profession. Tough job indeed.