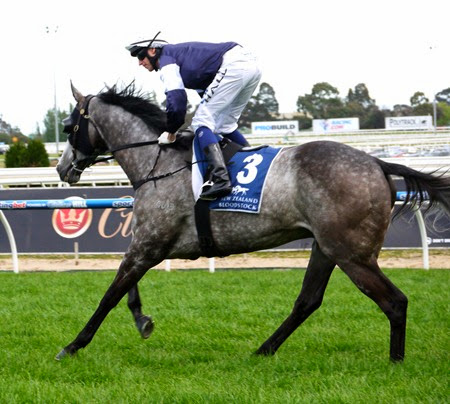 Ah, the Melbourne Cup… the yearly puzzle in which one tries to calculate the impossible.

Last year I managed to pick the winner, Fiorente for the first time in years, so let’s hope my speculations this time around prove to be prophetically accurate.

There used to be a guideline I used in the past where I would select three horses based on the following formula:

I would really like either Fawkner, Who Shot Thebarman or Lucia Valentina to win, and think they all have the breeding and ability to do so.

Fawkner ran sixth in last year’s Melbourne Cup, but has returned a much improved horse this year, and now races on the speed, which has served him well with victory in the Caulfield Stakes and a close second in the Cox Plate.

Who Shot Thebarman has won over the distance (3200 metres) in the Auckland Cup this year. He loves Flemington and has two good wins on the course this Spring and also has experienced Cup jockey Glen Boss in the saddle.

Lucia Valentina showed how special she is when she won the Turnbull Stakes earlier in the season, and she finished third in the Caulfield  Cup, reportedly running the best time in the race. There are those who doubt she can run the 3200 metres, but her sound staying pedigree says otherwise.  She is lightly weighted and is an excellent chance.

Of the locally trained imports with a chance, there is Signoff who took out the Lexus Stakes last Saturday, who seems to be everyone’s favourite at the moment. It may be to my detriment that I don’t warm to him, but with hardly any weight and top Brazilian jockey Joao Moreira on board, he could well give Darren Weir his first Melbourne Cup victory.

My top Ruffie is Willing Foe simply because I like his name. 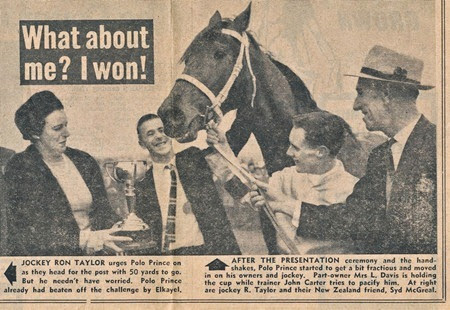 The above newspaper clipping from 1964 shows Polo Prince with his connections after winning the 1964 Melbourne Cup. He’s not one of the more famous winners, and he hardly won anything else. He was a New Zealander out of Marco Polo by Sou’-East.

I haven’t attended a Melbourne Cup meeting since 1971, which was won by the grey stallion Silver Knight, who later sired the 1984 Cup winner Black Knight. I can’t remember much about that meeting, but I probably had a bet on Silver Knight, him being a grey, as I’d gone to the 1970 Melbourne Cup where another grey, Baghdad Note, won and I’d had my money on him.

This year I have decided to brave the undoubted crowds and head to Flemington for the great race.  The weather is expected to be hot and sunny, a change from last Saturday where it was cold, windy and slightly damp. I haven’t had a chance to write about Derby Day, but I’ll try and get something posted on Wednesday and incorporate the Melbourne Cup as well.

My intention is to arrive an hour before - and only stay for - the Melbourne Cup as the rest of the race card is pretty uninteresting.

In the meantime, Good Luck and hope you pick the winner.