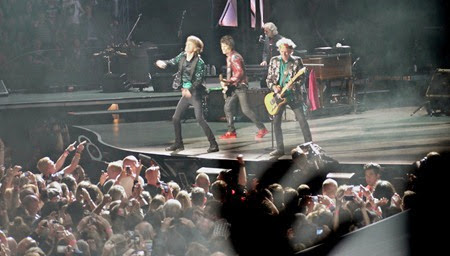 Pity the poor souls who booked to see the Rolling Stones at Hanging Rock on Saturday night. The show has been cancelled because Mick Jagger has a throat infection and has been advised by his doctors to take it easy for a while.
Perhaps he overextended himself last Wednesday night, when he and his fellow cohorts in the legendary rock n roll band put on a show to remember.
I’m terribly pleased that I did attend the event. I know, it cost a fortune, but my outlay for the concert was offset by a generous Ticketek gift voucher from Nu Country. They give me a voucher every year for maintaining their website, and I like to use it on blockbuster shows I normally would not attend.  Some are disappointing, some are surprising and some are great. The Rolling Stones were great.

The Stones were scheduled to start at 8.00pm, but eventually made it to the stage at 8.30pm, the big screen behind the stage showing a glowing red sun, with a booming base note ringing out as the Stones pranced onto the stage. They launched instantly into Jumping Jack Flash and the crowd erupted in delight. That was followed by It’s Only Rock n Roll, then Tumbling Dice, all heavy rockers, before slowing down for Wild Horses.

Throughout the Australian tour, the Stones have given the fans an opportunity to request a song, not on the regular set list. Melbourne’s choice was Street Fighting Man, and the Stones delivered it in riveting fashion.

When Leonard Cohen performed here a couple of years ago, everyone marvelled at how spry he was for his age. The Stones left him for dead, Mick Jagger in particular, who pranced and danced with his habitual panache and looked very fit despite the ravages of time showing on his face. Even Keith Richards was able to arise from a kneeling position with grace and little effort. You marvel that he’s still alive, let alone upright on stage playing a guitar. 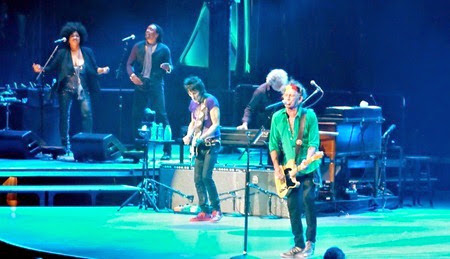 Ronnie Wood was the character of the original Stones bunch, wearing vibrant red sneakers and occasionally sneaking a cigarette in the strictly no smoking venue. If you’re a Rolling Stone you obviously can get away with political incorrectness. It was almost a nostalgic moment watching him smoke – something you never see at concerts these days.

The sound was excellent, perfectly mixed and crystal clear as far as vocals were concerned.  My ears were only slightly buzzing after the show.

Rod Laver Arena was packed to the rafters, and the crowd was a mix of old and young fans that really grooved to the band.

Audience participation included lots of clapping, arm waving, singing along and woo wooing at appropriate times, for instance the opening segue for Sympathy With The Devil, where Mick Jagger appeared in a fiery red cloak… 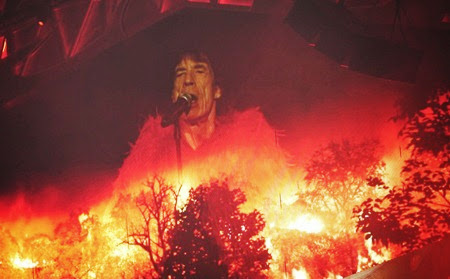 Shot of screen with Mick Jagger superimposed in a fiery scene
Keith Richards got a chance to perform two songs solo  - Happy and Before They Make Me Run. Both he and Mick were in fine voice and were ably backed by singers Lisa Fischer and Bernard Fowler. As well as the core Rolling Stones – Mick Jagger, Keith Richards, Ronnie Wood and Charlie Watts - there was an additional keyboard player, Chuck Leavell, bass player Bobby Keys, and saxophonist Tim Ries. Former Rolling Stone, Mick Taylor also made a guest appearance and a local choir, Consort Of Melbourne, lent their angelic voices to You Can’t Always Get What You Want.

I reckon Mick Jagger changed his shirt about five times, and Keith Richard swapped his original green shirt for a blue one.

As for light shows and extravagant effects, there was none of that at the Stones concert. It was all low key, but effective.

My seat was on the lower tier, so I had a really good view of the stage, close enough to see the lines on their faces. However, my camera couldn’t handle the lighting and action, so the above photos are the best I got from my vantage point.

It was a great concert, really enjoyable and it sounded genuine – the REAL  thing live – the Rolling Stones as we all remember them.

Inimitable, they are indeed the greatest rock n roll band in the world.