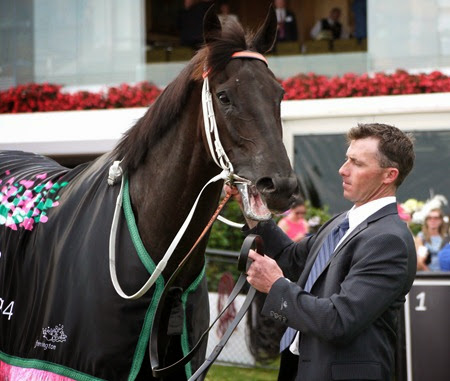 After looking at the race card for this Saturday’s Caulfield Cup meeting, I’m rather regretting that I did not purchase an early bird ticket for the event. Rather than having an uninteresting line up of support races, I’ve noticed that quite a few old favourites, that I have not seen in action this Spring, are racing at Caulfield on Saturday.

For instance, Manawanui, who has not been seen in Melbourne for a year is entered in the Group 3 Moonga Stakes. He ran in this race last year but finished unplaced.  Since then he has had only one run, in the Group 3 Bill Ritchie Handicap on 20 September this year, which he won.

So it looks almost as good a support card as that on Caulfield Guineas Day. But the thought of having to wait once again for the feature race late in the day dampens my desire to be there. I’ll watch them all on TV for a change.

The main focus of this post is the Group 1 Caulfield Cup. Again, it is a difficult race to analyse with so many factors to collate. A full field will contest the race and it is comprised of a mix of Internationals – Admire Rakti and Bande from Japan, Dandino (has been scratched) and Seismos from England – seasoned imports and locals (including those from New Zealand)

Lucia Valentina is the deserved favourite after her stunning win in the Turnbull Stakes.  There are those who say she is a risk at 2400 metres, after she ran third in the ATC Oaks behind Rising Romance and Zanbagh, but she is bred to run the distance and has the Zabeel factor with her sire being Savabeel, a son of the great Zabeel. The only other runner with the Zabeel factor is Brambles. Last year’s winner Fawkner had it through his sire Reset.

The other locally bred runner who I fancy  is Who Shot Thebarman who is in great form having won his last two races by over two lengths. The only query is that both those wins were on the wide open spaces of Flemington, and he hasn’t actually ever run at Caulfield. He is one of four Chris Waller trained horses entered in the race. The others are Hawkspur, Junoob and Moriarty, the latter two being last start winners in Sydney. Chris Waller has never won the Caulfield Cup, so no doubt will be hoping one of his stable can take it out. He seems to have a great strike rate in Group 1 races, so it’s quite possible he’ll succeed.

Of the Internationals, it wise to be wary of the Japanese runners, after they ran the quinella in the 2006  Melbourne Cup.  With Bande scratched, that leaves Admire Rakti as the sole Japanese representative, and he could easily steal the show as he’s highly regarded in International racing circles.

It would be my ideal finish if Lucia Valentina and the other four year old New Zealand mare Rising Romance could run the quinella.

Truth to tell, anything could win with the field being evenly matched. With known front runner Bande scratched, who knows who will take on that role now. Lloyd Williams’ two Moons (Green Moon & Sea Moon) will race closer to the speed it has been reported. As was seen at Caulfield last Saturday, those on the speed were the most successful.

Victory for Japan!  Japanese stayer Admire Rakti won the Caulfield Cup, so it appears they are back big time.

The New Zealand mares Rising Romance and Lucia Valentina came second and third –so near yet so far from my ideal finish.

Thanks to a bet on Rising Romance I basically came out evens on the day, no loss no gain.

I watched all the action on TV and even if I thought it would be better being there on the scene, considering the crowds, I was glad I decided not to attend.

Of my watched favourites, it was great to see little Miracles of Life come back a winner, even if she had to share the victory with Bel Sprinter in a dead heat. Catkins ran third in her race, and Manawanui finished fourth in his.

Next week is the Cox Plate, my favourite of the big three races – can’t wait!