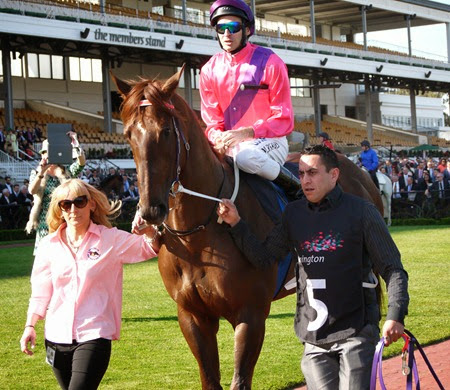 With only a little over a week till the running of the first of the big cups, the Caulfield Cup, the Melbourne Racing Club presents a wonderful day of racing this coming Saturday at Caulfield Racecourse.

My aim is to arrive at the racecourse early enough to watch the Group 3 Thoroughbred Club Stakes (1200 metres) where Blue Diamond Stakes winner Earthquake will be making her first Spring appearance in Melbourne. She has been disappointing so far this spring, running third at her last two starts at Randwick, but perhaps she’ll appreciate running the Melbourne way, on the track where she has scored two victories.

Up against her are eight other fillies, the most threatening being Tawteen, Silversands, More Radiant and Igritte.

Interestingly, Rubick who was regarded as the top colt in Autumn and started as second favourite in the Blue Diamond Stakes where he finished fourth, makes his first appearance on the racetrack since that race in the Group 2 Schillaci  Stakes, a sprint over 1000 metres.

He faces a small field of classy sprinters that include Gregers, Platelet and 2013 Golden Slipper winner Overreach, also returning after a long break.

Melbourne will get its first chance to see Hong Kong star Dan Excel, out here for the Cox Plate, in the Listed Weekend Hussler Stakes, a handicap race over 1400 metres. He’s been handicapped to carry a whopping 63.5 kilos giving nine kilos to the majority of the field, so it’s unlikely that he’s in it to win it, but more likely to familiarise him to Australian race tracks.

Various Caulfield and Melbourne Cup bound imports and International horses have been entered in the Group 2 Herbert Power Stakes, a race over 2400 metres, so it will be worth watching to see how they fare.  There’s the German horse Protectionist, the British Lord Van Percy and Renew, up against locals like Sangster, Let’s Make Adeal and Albonetti, and seasoned  imports that include Bonfire, Masked Marvel, Signoff and Big Memory.

The first of the Group 1 races is the Caulfield Stakes, run over 2000 metres. It has attracted a first class field with no less than 10 Group 1 winners in a field of 12 starters.  The pundits are calling it a Cox Plate preview and it is quite likely that the eventual Cox Plate winner is in the field, if you discount The Cleaner, whose next race is that Group 1 event.

Last year the Caulfield Stakes was won by Atlantic Jewel with Foreteller and Super Cool running second and third.  It turned out to be her last race as she sustained an injury shortly after that, which resulted in her not running in the Cox Plate and being retired.

So who will win this year’s edition?  It’s an evenly matched field, but the top picks are Dissident if he can run 2000 metres, Fawkner who certainly can, and who finished a very close second to Dissident in the Makybe Diva Stakes, Foreteller of course, and Happy Trails who had a torrid run in the Turnbull and usually manages to win at least one major race over the Spring carnival. You’ve also got Dear Demi who is in great form,  Victoria Derby winner Criterion and Sacred Falls, the dual Doncaster winner, who won the Group 1 George Main Stakes at his last start. Take your pick!

It’s going to be a looong day as the four Group 1 races are being run consecutively from 3.55pm, the feature race being scheduled at 5.40pm.

The Group 1 Toorak Handicap follows the Caulfield Stakes. It is a 1600 metre race and has attracted a fantastic field of contestants. You’ve got English horse Guest of Honour as top weight, having his first run on Australian racetracks, and Commanding Jewel, Trust In A Gust who beat Dissident in the Rupert Clark Stakes, top Sydney mare Arabian Gold, New Zealand mare Recite, and other good performers like Speediness, Bull Point, Solicit and Atlante.

It has top class fillies like Bring Me The Maid, Go Indy Go and Afleet Esprit who are best chances. It’s lucky Flight Stakes winner First Seal is staying in Sydney to contest the boys in the Spring Champion Stakes, so the abovementioned fillies have their chance for Group 1 glory.  Also in the picture are Lumosty and Amicus who have been placed in shorter races recently and could likely feature in the finish.

The Caulfield Guineas is seen as a match race between Sydney and Melbourne’s top colts. Rich Enuff heads the Melbourne brigade and looks the genuine article, being unbeaten in his three runs this spring. Also batting for Melbourne are Merion and Chivalry. The Sydney team have Almalad and Shooting To Win, and are both last start winners.  Then you’ve got Queenslander Looks Like The Cat, who has run second to Rich Enuff at his last two starts, and New Zealand colt Our Vespa who already has a Group 1 win (in NZ) under his belt. I’ll be cheering for Rich Enuff.

Sydney’s sole Group 1 this weekend is the Spring Champion Stakes run over 2000 metres. Top pick is the so far unbeaten Sweynesse who is certain to start favourite. Flight Stakes winner First Seal appears to be his only serious opposition, but others like Panzer Division, Valentia and Hampton Court could mount a challenge to the favourites and steal the prize.

The weather in both Melbourne and Sydney is expected to be fine this weekend so the racing will be on good tracks.

Myself, I’m looking forward to attending yet a another superb race meeting.

Who will be the feted stars this Saturday?