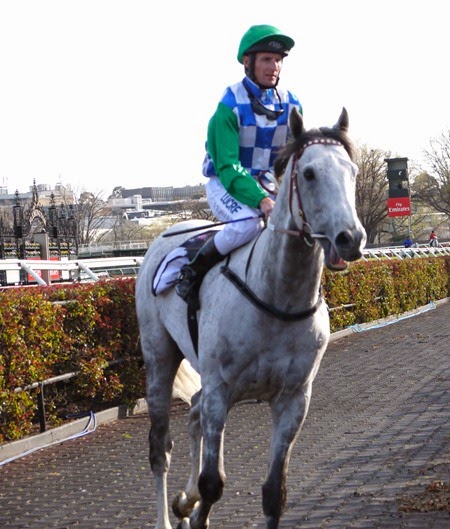 With the AFL season over, Melbourne’s sporting focus shifts to the Spring racing carnival as the build up to the big event on the first Tuesday in November gathers pace.

This Saturday Flemington hosts the Group 1 Turnbull Stakes on its hallowed turf along with an interesting card of support races.

In Sydney at Randwick, they have their Spring racing carnival all happening on one day, with three Group 1 races – the Epsom Handicap, Flight Stakes and The Metropolitan to run this Saturday.

Tomorrow is expected to be fine and sunny, so I’ll be off at the races again to take in the sights and sound of first class racing.

I hope to arrive at Flemington in time to witness Race 3, the Group 3 Bart Cummings, a race for stayers over 2520 metres. Last year it was won by Sea Moon, but he lost out on a protest to Araldo. He’ll be kicking off his spring cups campaign in this race again.  Up against him is the Chris Waller trained Who Shot Thebarman who won his first start at Flemington a few weeks ago and appears the top contender. Also in with a chance are Ibicenco, Ethiopia and Marksmanship.

The next race of interest on the program is Race 5 , the Group 2 Gilgai Stakes run over 1200 metres. Chautauqua is the top pick after he comfortably won the Bobby Lewis Quality at Flemington at his last start, beating Temple of Boom, who is obviously the next best. The Moody trained Il Cavallo, Gai Waterhouse trained Longma and New Zealand mare Bounding all have a chance as well.

Another Group 2 race, the Edward Manifold Stakes for fillies run over 1600 metres looks to be a worth watching. With top filly Thinking Of You scratched from the field to run in the Flight Stakes in Sydney, the race is wide open and up for grabs to smart fillies like Veuvelicious, Fontein Ruby, Pittsburgh Flyer, Golconda and Maastricht.

Race 7 is the Group 1 Turnbull Stakes (2000 metres) and has attracted a full field of 16 runners, plus emergencies. Last year’s win ner was the reliable and generally overlooked Happy Trails who pipped Puissance de Lune at the post. Both of these horses are in it again along with regulars Green Moon, Super Cool, Hawkspur and Silent Achiever. The current  favourite is Lucia Valentina, but she is currently under an injury cloud so may not start.  It’s a difficult race to assess as quite a few of the contestants have the form and ability to win. I’m hoping Super Cool can take the prize. His trainer Mark Kavanagh intimated as much to me when I briefly spoke to him at Caulfield the last time I was there, and had the opportunity to ask about Super Cool’s chances in the Underwood Stakes.

I will probably linger at the course for Race 8, the Blazer Stakes, another Group 2 race, this time for mares, run over 1400 metres. Bonaria, Politeness, May’s Dream and Suavito are the top chances.

On to the Group 1 races at Randwick..

The first of these to run is the Epsom Stakes (1600 metres).  Top miler Boban has been disappointing so far this Spring, but he may appreciate being back at the scene of his victory in this race last year, so I’m not giving up on him yet.  His stable mates Royal Descent and He’s Your Man are  his top rivals, along with Toydini and Laser Hawk. It’s another hard race to pick the winner.

A small field of 7 fillies will contest the Group 1 Flight Stakes (1600 metres) and include Winx, First Seal and Thinking Of You as the top three chances. This race has been won by top class fillies like More Joyous, Samantha Miss, Sunline and Guelph to name a few, so which filly will add her name to the winners list? Beats me.

The Metropolitan is a Group 1 race for stayers run over 2400 metres. It’s another conundrum of a race with a large field of 16 contenders. I rather fancy La Amistad in this as it’s up to her favoured distance.  For some reason Spillway is the favourite though I can’t work out why, as at his recent starts he hasn’t been all that eye catching.  Junoob won his start in the Group 2 Hill Stakes, narrowly beating Criterion and Bagman, so has to have chance of scoring again. Kingdoms, a High Chaparral boy also has the credentials to win.

The tracks at both Flemington and Randwick will be in good shape, so wet form need not be considered this time for either meeting.

I’m also keenly looking forward to Sky Racing’s Star Stable competition, which starts this weekend. I’ve picked my stable and many of my selections are racing tomorrow, so I’ll be interested to see how they fare.