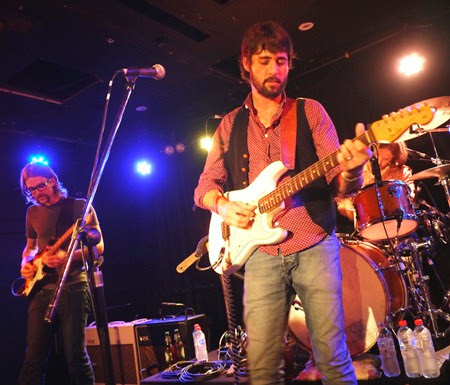 On the evening of the day of the death of the greatest (in my lifetime)Australian Prime Minister, Gough Whitlam, my mind was occupied by memories of his time in Office, as I trammed it up to Northcote Social Club for my evening’s entertainment.

As I have not followed the career of Ryan Bingham and only possess his first album Mescalito, I profess to being somewhat ignorant of the rest of his releases, other than the song he wrote for the movie Crazy Heart - The Weary Kind - for which he won an Academy Award, so it was with an open mind I attended his show and not strictly as a fan.

There were more than enough fans to cover for my lack of that status; in fact the audience was a good crowd, enthusiastic and friendly. Don’t expect a detailed review, let alone a set list,  as more than half the songs he sang were new to me and I didn’t catch their titles.

In person Ryan Bingham is pleasing to look at and he has a natural charm that won over the already indulgent audience even more.

He was accompanied by his band, and I must say they were excellent. It was more rock than country, flavoured with Ryan Bingham’s unique take on Americana. He has a grainy husky old man’s voice that sounds remarkable issuing from such a young person.

I don’t know how long the show lasted as I left at around 10.4o, not because I was bored, but due to feeling faint in the oppressive heat of the band room and feeling the effects of standing on concrete for a couple of hours.

Songs I remember from the show are La Malaguena (a Mexican mariachi song, purportedly the first song Bingham ever learned to play), Dollar A Day (from Mescalito) Tell My Mother I Miss Her So and Hallelujah.

Back to the death of Gough Whitlam at the ripe old age of 98, I still vividly remember his days in Office and even after all these years feel angry at his Dismissal. It will be a long time before Australia has a leader as witty, intelligent and sound thinking as Gough Whitlam. Perhaps persons of his calibre are not being made any more.