The Cleaner Sweeps The Pools, But No Win For Lankan Rupee 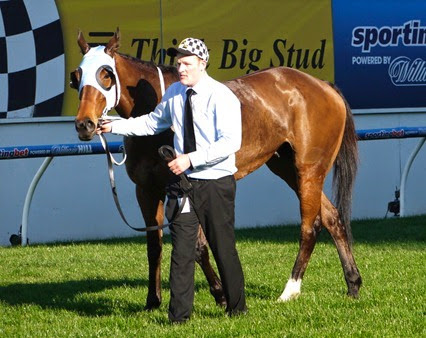 It seems that Racing Victoria is scratching around trying to find a horse to replace Black Caviar in a vain effort to attract more people to attend race meetings. Lankan Rupee certainly looked the most likely to at least partly fill the great mare’s shoes with his great record in the autumn, winning three Group 1 races in succession.

At the entrance to Moonee Valley racecourse on Saturday, they were handing out Lankan Rupee stickers, and announced that if Lankan Rupee won the McEwen Stakes, schooners of Carlton Draft would be half price for an hour after the race.

If you were attracted by such an offer, you would have been disappointed, as Lankan Rupee was rolled by underrated mare Angelic Light – the shock result of the day.

I got to the track around 1.40pm where Race 3 was in progress, so I didn’t witness it, nor barely noted who won – Caveka the favourite apparently from War Point and Lotion.

As there was plenty of time before Race 4, I decided to check out the stalls. I came across Lankan Rupee in his stall, looking pretty as a picture. His strapper obligingly posed with him for a photo. 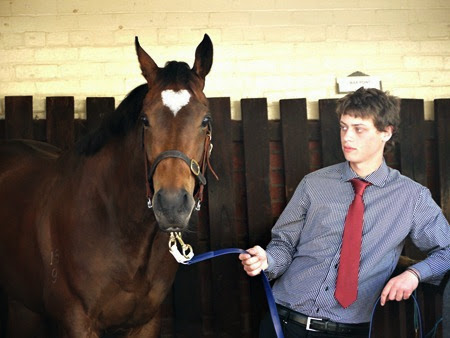 Lankan Rupee in his stall

I also spotted current Melbourne Cup favourite The Offer being walked by his strapper. He’s not as good looking or as impressive as Fiorente, though a handsome beast nonetheless. 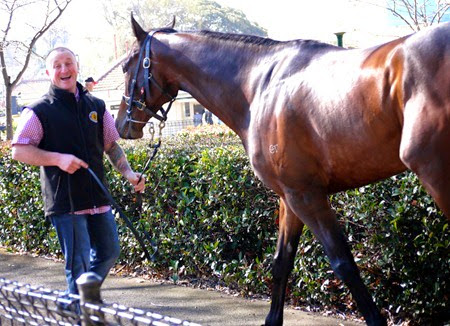 The Offer in the walking ring

Race 4 was the Jeep Don’t Back Handicap, which is run over the Cox Plate distance of 2040 metres.  After cursorily studying the form I decided to put a few dollars on Purple Tiger, then sallied to the public lawn to watch the race.

The favourite Wrotham Heath won by a short margin from Purple Tiger, so at least I made a small profit. 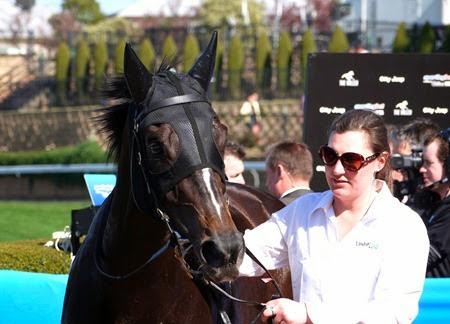 Race 5 was the race we’d all been waiting for, the McEwen Stakes, where Lankan Rupee was expected to shoe it in. As is the way with horse racing anything can happen, and other than Black Caviar, there is no such thing as a certain outcome.

Lankan Rupee was probably undone by his assumption of the lead shortly after the start of the race, where he slogged it out with speedy filly Eloping for most of the race. Angelic Light was racing just behind the speed and waiting for her chance. Lankan Rupee took the lead up the straight, but Angelic Light’s fitness served her well as she overtook Lankan Rupee and stole the race by a short head. Eloping was 2½ lengths away in third position. 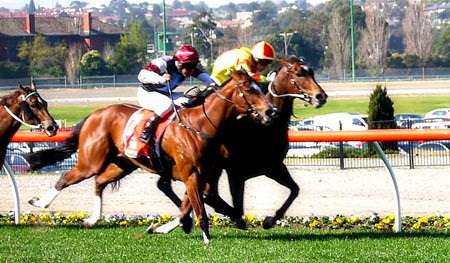 Race 5  finish - Lankan Rupee (inside) and Angelic Light  fight out the finish up the straight. 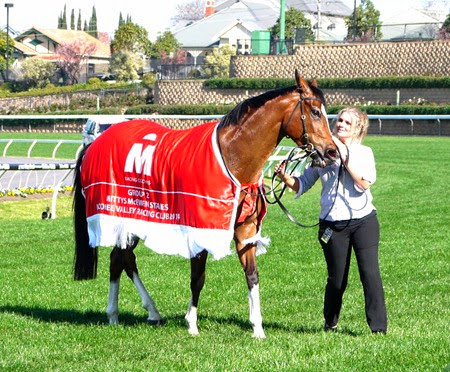 Angelic Light poses for the press after winning the McEwen Stakes

I didn’t have a bet in the race as I would have chosen Lankan Rupee, but his odds were so short it wasn’t worth placing a bet.

My pick for Race 6, the Telstra Phonewords Plate, without giving much thought to the form, was London Lolly, but she disappointed again.  Tawteen, having only her fourth start after winning her last race on a rural track, won convincingly by 3½ lengths from Fortiche with Pittsburgh Flyer a further ½ length third. 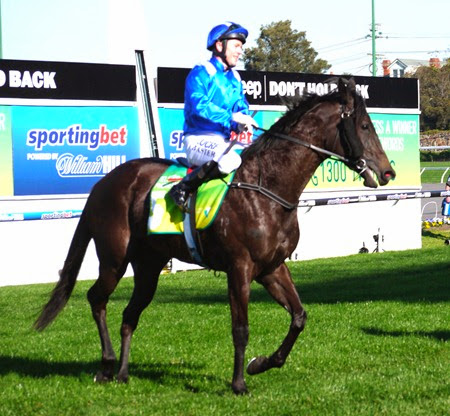 In between the Moonee Valley races I watched the action from Sydney on the big screen in the public bar. Earthquake proved that heavy tracks are not her forte as she was beaten into the third place by longshot rivals Winks and Alpha Miss in the Furious Stakes.  Hawkspur and Royal Descent fought out the finish of the Chelmsford Stakes and it looked almost like a dead heat, so close was the margin of Hawkspur’s win. And Lucia Valentina, with a remarkable run from the back of the field won the Tramway Stakes from Tiger Tees.

With the feature race being next on the card at Moonee Valley I decided to grab a beer and rest my feet next to the parade ring out the back.

For some reason my camera was playing up, so my photos of the Dato Tan Chin Nam Stakes contenders are effected by the shadows of the trees in the parade ring. Here are some of the better ones… 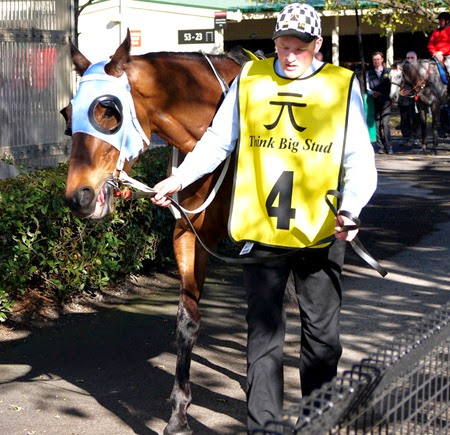 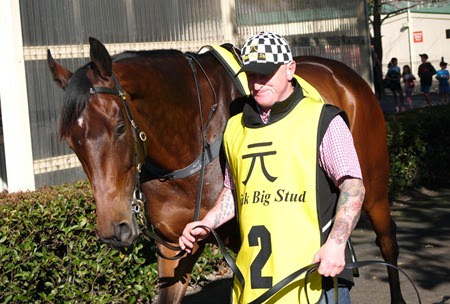 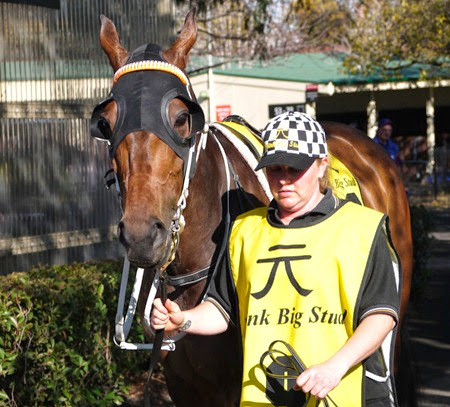 The race itself was a ripper with The Cleaner emulating Vo Rogue with his  bold front running style, where he led from start to finish. Mourinho came the closest to catching him losing out by ¾ length. Foreteller ran an eye catching third. 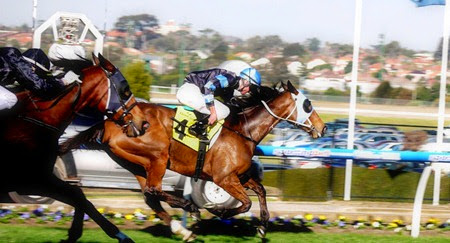 The Cleaner is now automatically qualified for the Cox Plate, and will probably run in it and ensure that it is run honestly.  He is a bargain basement horse costing only $10,000 and by an unfashionable British sire, Savoire Vivre and hails from Tasmania.  He has a cult following so his Dato Tan win was popular with the punters and he started as $4.30 favourite. I managed to get odds at $4.80 so was delighted with his win. I was pleased also that the astrological significance of his name, and likelihood of winning, was spot on. 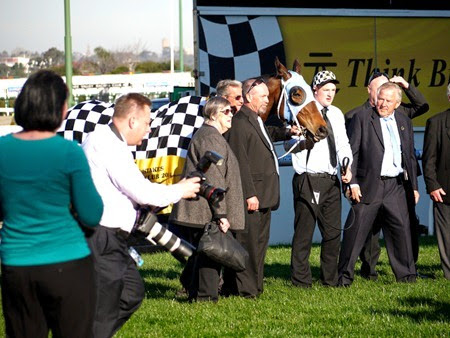 The Cleaner with his owners posing for the press corps.

After collecting my winnings on The Cleaner I headed home, quite pleased with another afternoon at the races.  The weather was warm and sunny in the main, though the shadow of grandstand encroaches across the Public Lawn as the afternoon progresses and brings a chill with it.

Next Saturday the racing action is at Flemington, the feature race being the Group 1 Makybe Diva Stakes with a strong support card. Living Legends Apache Cat and Paris Lane will be present as well, so of course I’ll be there with bells on.