Shining Jewel & other highlights at Flemington, not to mention a Royal Birth… 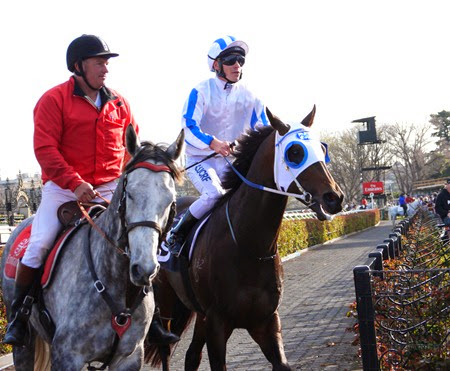 Dissident returns to scale after winning the Makybe Diva Stakes

It promised to be a great day of racing action at Flemington last Saturday and it didn’t disappoint. The sterling race card delivered in spades a series of sensational races. Commanding Jewel took out the the Let’s Elope Stakes for the second year in succession, and Dissident signalled that he was a serious Spring contender winning the Makybe Diva Stakes.

I was obliged to arrive at the track earlier than I would have liked due to the Flemington train schedule, where the final train heading to the track left Flinders Street at 12.50 pm. I caught the one before as the train from my home station didn’t really sync with the later train going to Flemington.

So I arrived at Flemington just after the first race on the program, and as is my wont I headed directly to the stalls area to see which horsey stars had already arrived.

The Living Legends were there, so I dropped by to say hello to Apache Cat and Paris Lane. 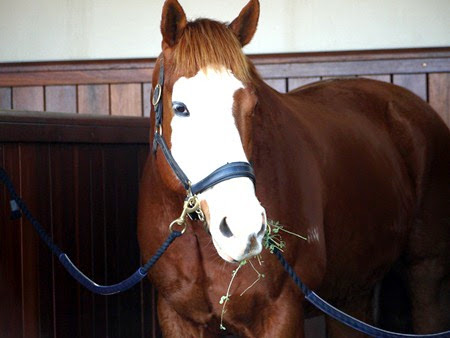 Apache Cat in his stall munching on straw 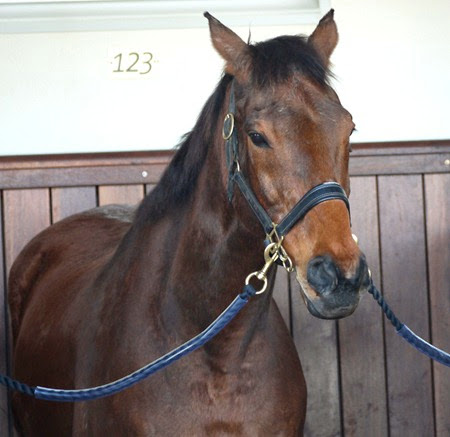 Paris Lane in his stall

In case you don’t remember, Paris Lane won the 1994 Caulfield Cup and MacKinnon Stakes and ran second in the Melbourne Cup the same year, so he’s getting on in years these days – 24 years old in fact. There is a precinct at Flemington Racecourse named after him.

Also out and about was the promising colt Divan, and a very attractive young fellow he is. Alas, his run in the Living Legends Stakes was very disappointing where he finished at the tail of the field. 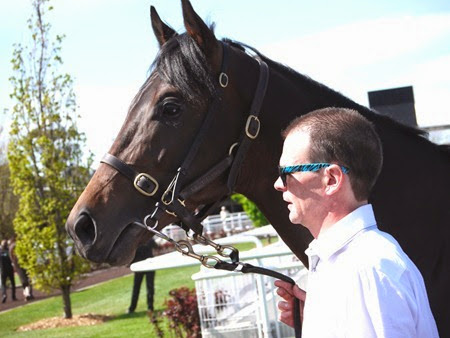 Divan in the walking ring

Commanding Jewel was being walked in the ring at the same time and I managed to get some lovely head shots of her with her strapper. 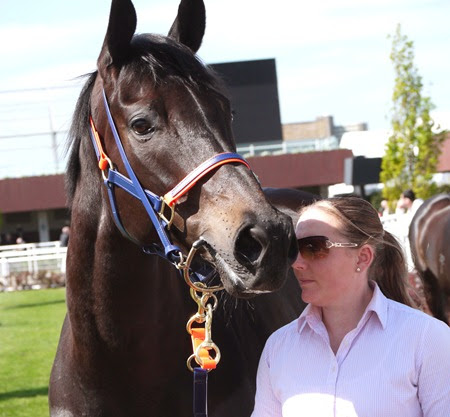 Commanding Jewel in the walking ring early in the afternoon

Race 2 the Sofitel Girls’ Day Out 2000 was in progress as I made way back to the public lawn. A race over 2000 metres it had a good field of stayers trying their luck at the big track. 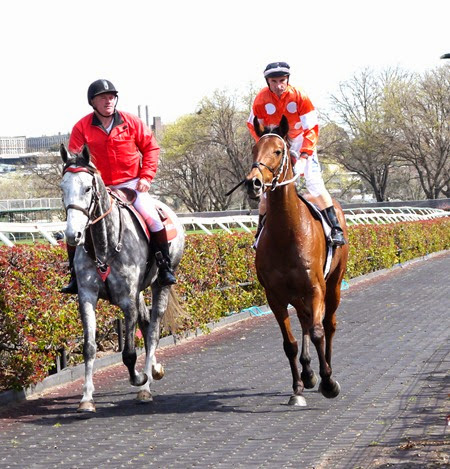 More stayers were engaged in the next race, the Spring Is The Season Handicap which is run over 1700 metres. Top weight Brambles was the victor, his first win since he won the Queensland Derby in June 2012. He fought off a determined effort by Big Memory to win by a narrow margin, with Signoff a further 2½ lengths away in third place. 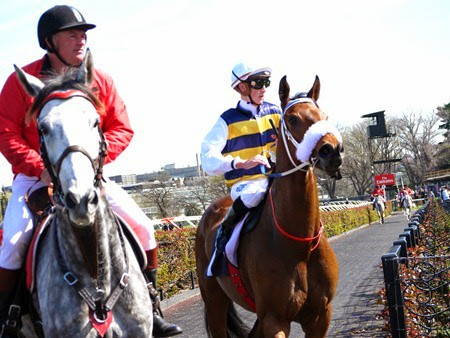 The next four races were the ones that in which I was most interested.

The first of these was the Listed Living Legends Stakes, so I found a possie next to the mounting yard to get photos of the contestants as they paraded or went to the track. 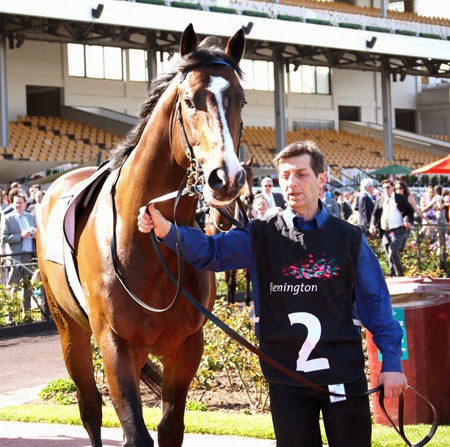 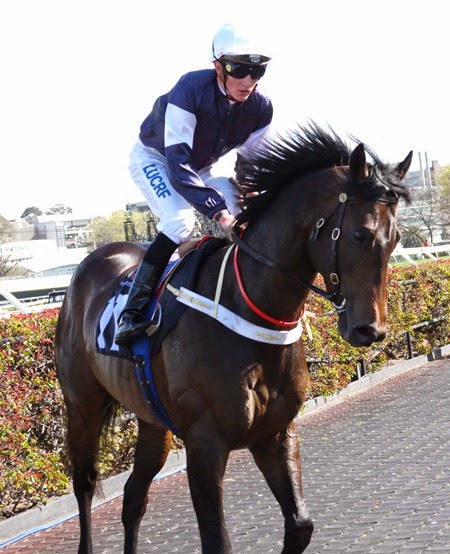 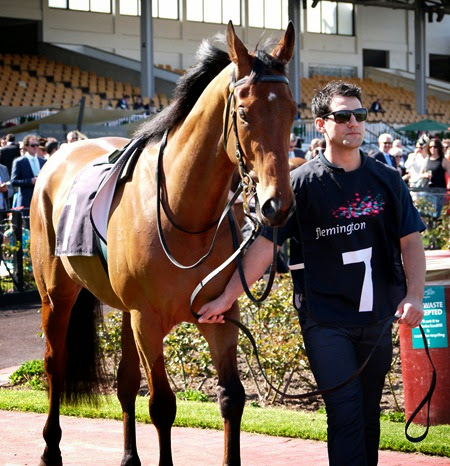 The race was won by Merion who managed to overtake Chivalry at the post with Zebulon running third. 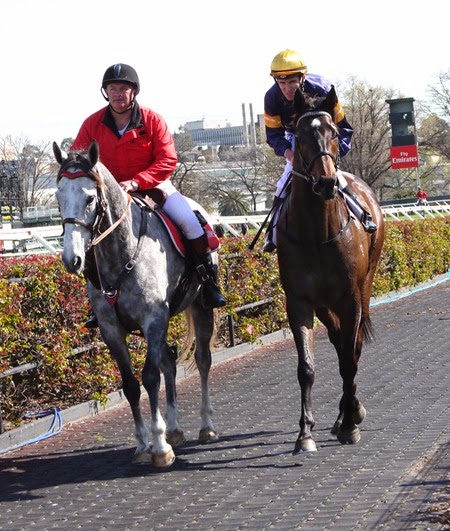 Merion returns to scale after winning the Living Legends Stakes

The first of the Group races and a real gem of a competition, the Group Two Let’s Elope Stakes  was next up.  Commanding Jewel, who was forced to race three wide for most of the race, took the lead in the straight and managed to hold off a fast finishing Dear Demi to win by a short margin. Nautical finished third. 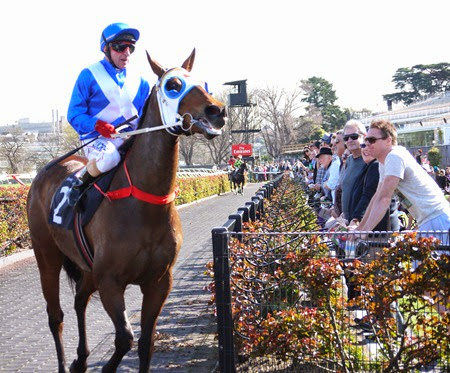 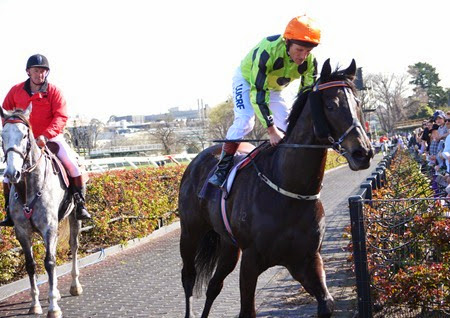 Back in the stalls area more horses had arrived, including old favourite Super Cool.  I always try and get a photo of him whenever he is racing, and am pleased with this one with Jade his strapper who as ever obliges me by posing with him. 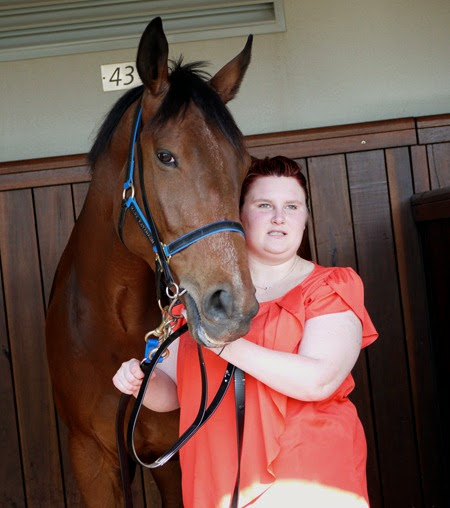 Meanwhile back in the mounting yard the Living Legends were parading… 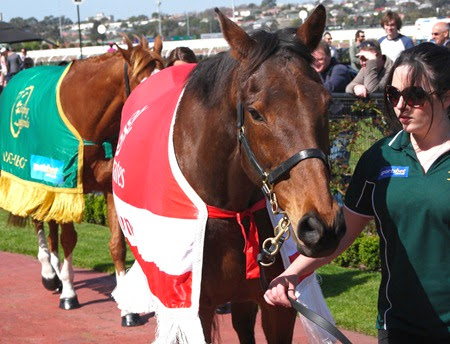 …and the Danehill Stakes contenders joined them shortly afterwards. 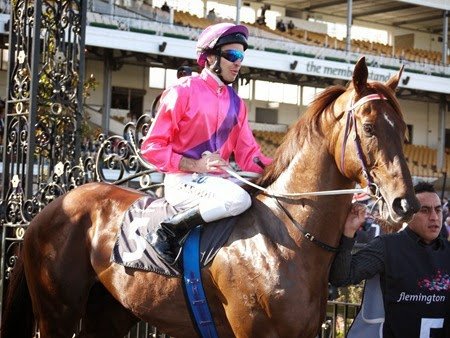 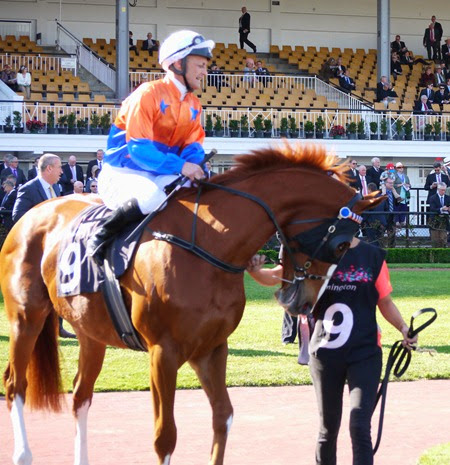 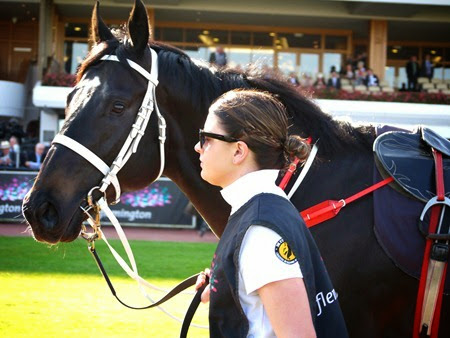 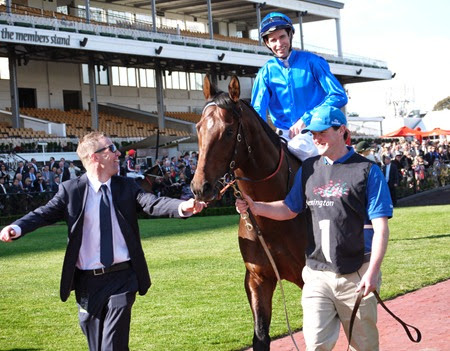 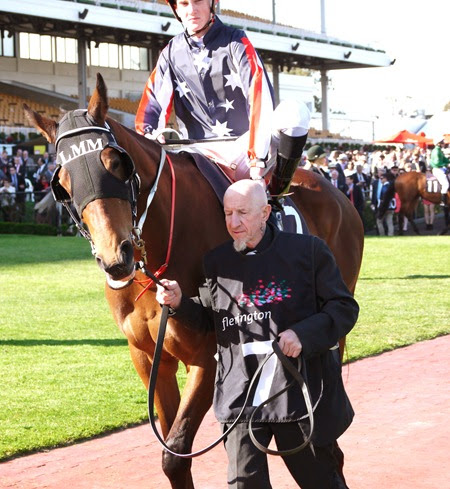 Being a 1200 metre race it was a dash down the long straight with Rich Enuff prevailing over Looks Like The Cat with Ghibellines three lengths or so behind them scoring third place. Rich Enuff was  having only the third start in his career, but it was his second win in succession. Looks Like The Cat so named owing to the big white blaze on his face similar to Apache Cat, narrowly missed winning and is one to watch in the future. 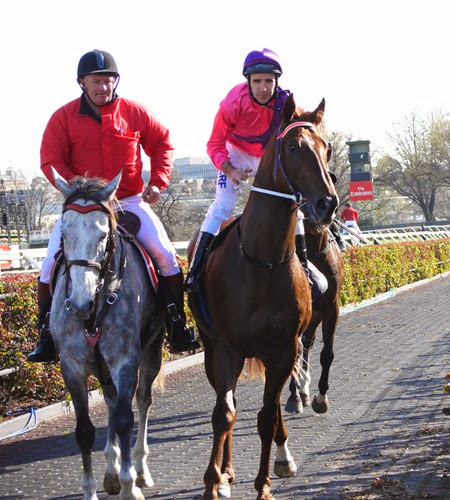 Despite arriving at Flemington early, the afternoon passed in a flash. It was a brilliant sunny day, so a pleasure to be outside. I was not feeling particularly lucky, so hardly had a bet at all, not wishing to put the kiss of death on my fancies.

In between the Flemington races I  did manage to watch a few of the Sydney races and was pleased to see Catkins romp in by several lengths in the Sheraco Stakes, though La Amistad was disappointing. I watched a replay of the Golden Rose when I got home as I left Flemington before it was it run. Hallowed Crown gave the fairly new partnership of Bart Cummings and his grandson James their first Group 1.

Soon enough it was time for the feature race the Group 1 Makybe Diva Stakes. I was tossing up between putting my money on Dissident or Boban and settled for the latter as his odds were slightly better.

I watched the parade in the mounting yard and snapped pictures of the main contenders as they filed out to the track. 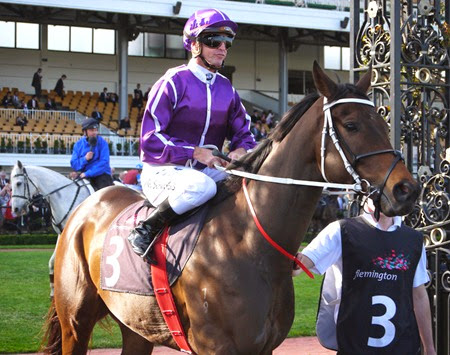 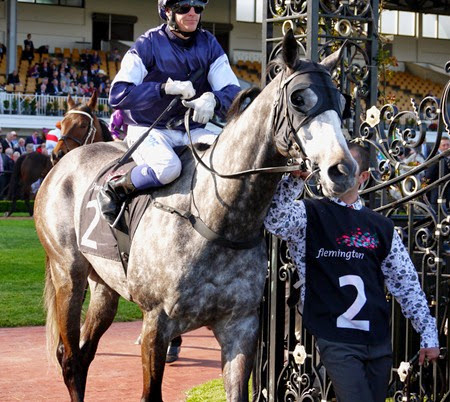 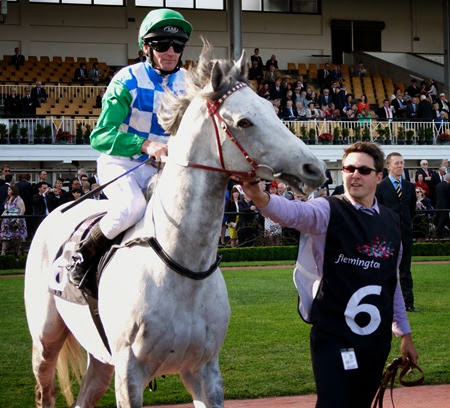 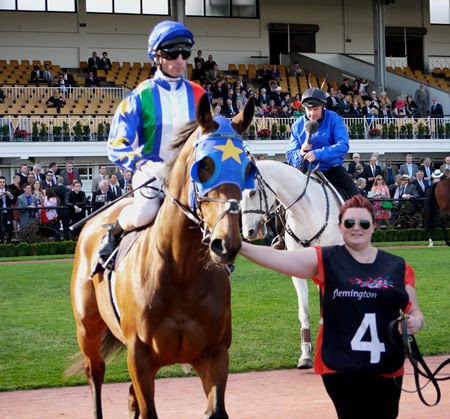 Super Cool – a much improved 8th

Dissident raced up on the speed this time and took the lead in the straight, holding on to win his second consecutive Group 1 from a fast finishing Fawkner. Puissance de Lune did well to come third. 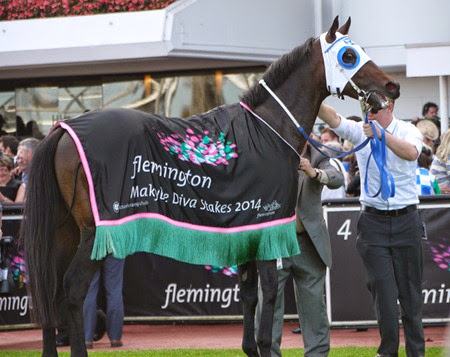 I didn’t stay long after the main event as I had to get home to feed the cats before heading out again to dine at a friend’s place.

It was an very enjoyable day at the races even if my only two wagers were unsuccessful. I’m not there to gamble anyway. I just love looking at the horses and following the racing action. It’s endlessly fascinating to this dedicated racing fan.

And of course the big racing news over the weekend was the birth of Black Caviar’s foal, a lovely little filly. There are pictures all over the web of the proud mother and babe, and of course her website has a good selection.

Next weekend Caulfield Racecourse is hosting a free entry race meeting which features the Group 1 Underwood Stakes.  And in Sydney at Randwick the Group 1 George Main Stakes is the feature event of another interesting race meet.