Hanging out on Chandler Avenue & other (less salubrious) places 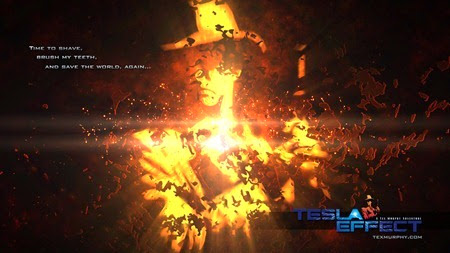 For the past week or so I’ve been playing the new Tex Murphy computer game Tesla Effect – A Tex Murphy Adventure, and have been wholly engaged by the game to the detriment of other interests.

After a sixteen year hiatus it was pleasant to be back on Chandler Avenue and seeing the old Chandler Avenue regulars again, as well as meeting the new residents and shop keepers. In case you’re wondering, Chandler Avenue is Tex Murphy’s home strip, situated in the mutant section of Old San Francisco in the post WW3 world of the game, where Tex resides, and has his office, in the rundown Ritz Hotel.

Set as it is in a post apocalyptic world, the atmosphere is dark and noxious, very film noir, but a wicked dry humour infects even the darkest moments of the game, a humour that Tex Murphy fans have grown to love. The new game delivers that same vibe. Sixteen years may have passed since the cliff-hanger ending of Tex Murphy – Overseer, but playing Tesla Effect instantly bridges the gap of years as if they had never passed.

Tesla Effect opens, after a fantastic cinematic introductory scene, with Tex regaining consciousness on the fire escape outside his office at the Ritz Hotel, with a bump on his head, strange injection marks on his arm and amnesia.  He is unable to remember his past seven years of existence.  The game takes off from there, with Tex endeavouring to recover those lost years and find out what happened to him and his girlfriend Chelsee who was with him at the cliff hanger end of Overseer. This leads him to several other locations, some quite hellish, as the devilishly complex plot unfolds.

Perhaps the most scary of the locations is the Tesla Institute, an abandoned scientific facility, where not too long ago everyone involved in the Tesla Legacy Society had been murdered by cold hearted hit man Big Jim Slade and his cohorts. At the Tesla Institute you have to overcome giant spiders, energy balls, killer bees and bombs of various kinds. It took me days to get through and I almost gave up several times.

Tesla’s inventions are indeed part of the plot and Tex must save the world from the mad machinations of The Translator who intends to use a Tesla device to purify the world, which will in fact split the planet in two.

Having played through the game once, I’m looking forward to playing it again with the advantage of knowing its best and worst scenarios and avoiding the situations where you can get killed.

I’m extremely grateful to Big Finish Games for delivering the game that we long time Tex Murphy fans have hankered for over the years.  Perhaps it is not as good as Pandora Directive, which is pretty near perfect, but it comes a close second.

If you feel inclined to try the game, it is available for purchase for $19.99US at Gog.com. The download is 15GBs.

Aaron Conners, one of the originators of the series, has written a novel based on the game which you can pre-order on his website. He also wrote novels based on the first two FMV games, Under A Killing Moon and The Pandora Directive, which are ripper reads, and will  be reissued soon.