What Did We Do Without Them? 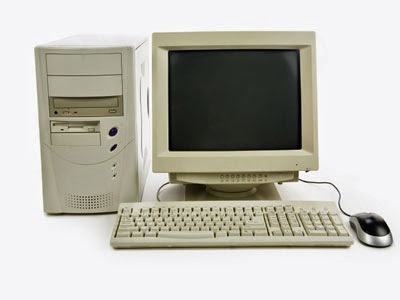 I’m speaking of computers of course.

What inspired me to write this post is that having just purchased a new desktop computer, it occurred to me that 2014 is the 20th anniversary of my acquiring my first PC.  It looked a lot like the one in the image above and was a 486DX33 IBM clone. It was top of the range at the time having a 2 x speed CD drive, a 250mb hard disk, 4mb ram and cost me about $5000 all up with printer, monitor, keyboard and mouse included. It ran on Windows 3.11 and Dos 6.2.

By comparison, my new custom made box only cost me $800 and is probably 1000 times more powerful than the 486. I’ve yet to fire it up, steeling myself for the tedium of loading software and attaching peripherals, and also getting used to a new operating system, Windows 7 in this case.

Yes, I’ve been a die hard Windows XP user, and as the system will not be supported from 8 April 2014, I figured that rather than upgrading the OS of my current 5½ year old computer – who knows how much longer it’ll chug along - I’d start afresh with a new computer running a newer operating system that was not Windows 8.

I know desk top computers are going out of fashion and that laptops and tablets are more popular these days. However, even though I do have a laptop and a tablet, I greatly prefer to work and play from a big computer and with a square LED/LCD monitor to boot. They are  pretty hard to get these days too, with wide screens being the monitor of choice for younger folk.  My current computer, when I bought it, came with a wide screen, but I couldn’t stand it and got rid of it as soon as I could.

My theory is that newer is not necessarily better and the same goes for my ancient beloved software, so I hope it all works in Windows 7.

One interesting coincidence regarding the 20 year interim between my first computer and the latest one, is that one of the first PC games I played on the 486 was Under A Killing Moon, the first FMV Tex Murphy game.  Tesla Effect,  the long awaited new Tex Murphy FMV game, is set to be released in a few weeks, so I’ll get to play it on my new computer, which should handle the game easily.  I’ve been playing a beta sneak peek of Tesla Effect on my current computer and it works fine in XP.  In order to play Under A Killing Moon I had to buy more RAM, and settled on 16mb which cost me $600 back in 1994 – that’s $50.00 a megabyte!

How times and technology have changed over the twenty years since I took up computing!

Returning to the title of this post, what did we do when there were no computers or internet?

I remember when we first got computers at work in the early 1990s we went along to Computer Shows and lusted after such devices as digital cameras, cd burners, scanners, colour inkjet printers etc. Colleagues used to return from these shows and show off their booty – free giveaways from the exhibitors like CD roms, copy paper samples and the odd game.  I’ve still got a packet of paper samples from the Canon stand for which I’ve never found a use.

I often wonder too. I haven't had a desktop for a long long time, having converted to a laptop in the mid 1990s. My first was a little grey Apple Powerbook (or was it iBOok then?), and then my favourite of them all, a gorgeous Clamshell. I loved to fondle it - really, it was my favourite and I hated giving it up. Ever since then I've had a Powerbook that I've changed every 4-5 years. To that I added an iPad in April 2011.

We got our first computer though around 1978-1980 when my husband built one. I used it on and off, for some personal databases, such as a wine database for which hubby wrote the program with my input. That computer was mostly his. In mid 1985, though, we got our first Mac and that was it for me. I was in love with personal computing and have never looked back!

We still have a desktop machine but that's hubby's domain while the laptop is mine. We also have a MacAir that we travel with. (We did toy with a PC laptop and then a PC netbook for travel for several years but last year decided we'd have consistency across our home and travel devices and got the MacAir. Funnily enough we have Android phones - go figure - mobile phones just aren't important to us I think.)

As for what we did before? I think more sewing - patchwork. With my laptop I do my computing the same time as TV watching, which is when I used to sew, so that my computing doesn't eat so much into reading. But it does do that a bit too - such as right now, which is not TV time but could have been reading time!

I too loved computers from the start. In the early days of computers at work we had Macs, not one apiece, but a few shared between many. When I bought my PC I toyed with getting a Mac because they were prettier than the PC, but the cost was so much more, and I was encouraged to go the PC path by the greater variety of software available for them. I remember using MS word on the MAC, and it was pretty terrible. At that time my 486 PC was faster than the MAC.

So I've stuck with Windows machines ever since, except for my
iPad, which I must admit is pretty gorgeous.

I'm currently trying to set up the Windows 7 new computer and striking all sorts of tedious and time comsuming issues, like setting up an email client as Windows 7 doesn't come with one.

Fortunately we've kept the old pc as a spare and disposed of the even more ancient PC to a recycler, so we can still access emails.

I hardly ever use my laptop, which I bought with Kevin Rudd's $900 payout during the GFC. Thanks Kevin! It runs Windows Vista, and is handy as a spare computer should all else fail.

I know what I did before computers. I read three newspapers a day, had a IBM golf ball electric typewriter and spent crazy money on audio equipment.

I didn't get into computers until the late 1990s. And when I got into them, I mean it. It started with an old Apple Mac 512 that defied my every attempt to 'get into it' - so I hit it with an axe. Deep recessed screws with security heads. Jobs really didn't want anyone to get into his machines. Being a tinker I turned to the opposition. They invited you into their machines but the catch was you had to live with Microsoft for the rest of your life. Sometimes I curse that axe.

Computers cured me of my newspaper habit. I haven't bought one in more than a decade. I miss the clatter of the typewriter - but not a lot. And as for the mountain of expensive audio equipment, I don't miss it at all... because I still have it and it is not for sale.

Congrats on your new set-up, wisely avoiding Windows 8 I have on this notebook and loathe. It is like Safari on MACS. My favourite notebook was a baby DELL, in this room still, but expired after great use. Previous Toshiba laptop partly expired and the colour worn right off the front of the keyboard from use. On my left I still have IBM PC no 1 of 2001. It goes OK and I plug in my dongle sometimes. New keyboard since the red wine disASTER OF 2003.

In the years before I had an electronic Typestar with wordprocessing capability, sadly the lovely carbon ribbons were single-use.
I read more than 3 newspapers a day online, subscribe to 2 paper deliveries and one online, buy books too often and read when I go to bed. In other news, On Twittr today I enjoyed the messages from UK breeders who have flown in for Inglis sales, with pix of the Dubai racing club they went to on the way here.

Actually, I still go out and buy The Age every day, mostly for the cryptic crossword, which I prefer to do with a pen and to read the racing news (if any).

I did have typewriters in the past 1960s-ish - an old portable manual Olivetti, which I used to write a book, and later invested in an electronic Smith Corona typewriter. I loaned it to a friend, who never returned it. Recently I asked her if she still had it, but she informed me she'd thrown it out in a hard rubbish collection, forgetting it was borrowed from me. I was not pleased, as I kind of hoped it would return to me one day.

The olivetti eventually wore out and was also chucked in the rubbish.

James, today I feel like putting an axe through the new computer. I've wasted the whole day setting up an email client and trying to install the printer, not to mention dealing with troublesome Windows updates, somehow installing some nasties on the computer, so more time was wasted getting rid of them.