You may not think that a trip to Sydney is much of an adventure, but for me it was, as I hardly ever get to go anywhere outside of Melbourne. I don’t mind travelling solo, and enjoy getting out of my comfort zone.

I met a young woman on the train to the airport when I was leaving, who had flown for the first time in her life, and was anxious about finding her terminal at the airport going home to the Gold Coast, or even getting off the train at the correct stop. She certainly needed her horizons to be expanded.

Arriving in Sydney town on Friday at around noon, and after checking into my hotel, I headed off to Mortdale out in the southern suburbs to visit my father’s youngest brother and wife. They’re now in their late eighties, and I had not seen them for many years. It was great to catch up, and we spent the afternoon chatting merrily away about a number of things, family matters included. My uncle has a great collection of old photos, dating back to the 19th century. He and my aunt at one stage did a search for family history and travelled back to the town in Somerset where our branch of the family originated. My great, great grandfather George, at the age of 34, emigrated to Australia in 1839 on the ship Morley. He died in Melbourne in 1886 at the age of 84.

Anyway, as my father died when I was only two, I have no memory of him, but his younger brothers, of whom there are only two left,  have always told me about him.  My uncle this time remarked that my dad was one the bravest people he ever knew. This is because, when my dad was a boy he got a splinter from a cow bail in his leg which became gangrenous and the leg was eventually amputated at the thigh. So my father was one legged, and was adept on a crutch. My uncle said that he never bemoaned his fate and was the most cheerful, thoughtful and kindest of elder brothers.  It’s a pity he died so young (he was 39 years old) and that I never knew him. Who knows what different path my life would have taken had he lived.

When I emerged from Central station after catching the train at the airport, by sheer chance I came out at the correct exit, close to the hotel I was staying at. Returning from Mortdale I exited on the other side of the station and got lost. I have my phone, but I find looking at maps on it is very hard, my vision not being 100%, so I walked, and walked, and walked until I finally found the right street and eventually my hotel. By that time it was quite late, so after dining at the hotel I called it a night.

The weather the whole time I stayed in Sydney was dry, warm and humid, which was good for attending the races at Rosehill as it promised a good track.

Relying once more on Sydney’s train system I successfully made it to the track, even though we were obliged to catch a bus from Olympic Park to the racecourse due to railway track work over the weekend.

It’s quite a small racecourse, but it was easy to get a good view of the races from the fence, though the mounting yard – a long narrow space – was not really accessible to Joe Public.

I arrived just before Race 2, so was able to test my camera in the conditions. 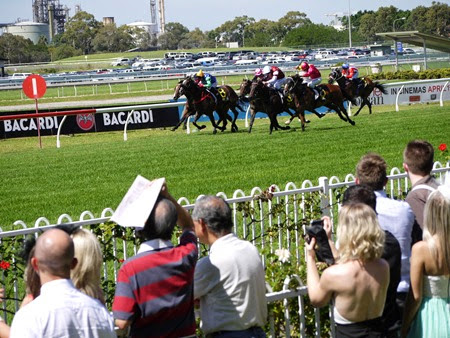 The races in Sydney run in a clockwise direction, so I had to adjust my mind to the difference as I initially looked anti clockwise to see where the race was at ala Melbourne direction, but soon got used to the changed view.

You would think Rosehill, with its name would be resplendent with roses, but the Flemington roses leave it for dead. It does have a rose archway where the horses leave the mounting yard for the track… 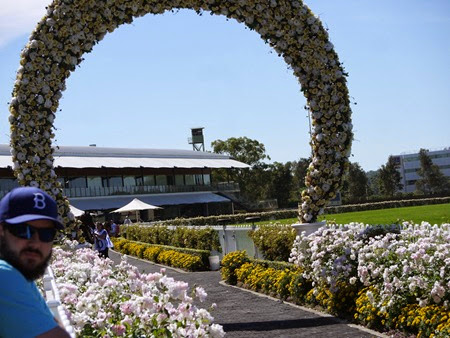 …and the statue of famous old sprinter Todman has a wreath of roses around his neck. 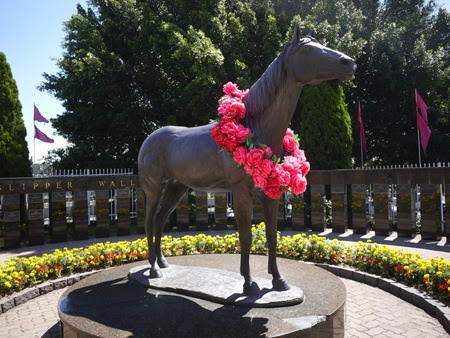 Which leads me into Race 3 which was the Group 2 Todman Stakes for Golden Slipper bound two year old colts and geldings, run over 1200 metres.  I was keen to see the Magic Millions Two Year Old Classic winner Unencumbered, who started as favourite. 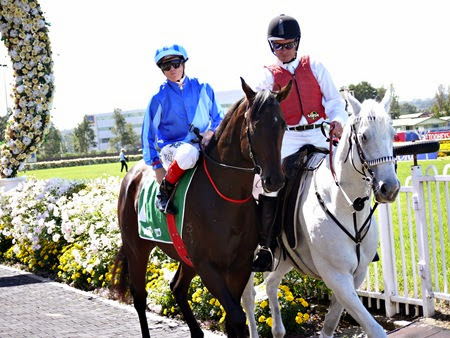 Unencumbered on his way to the track from the mounting yard

However, he was upstaged by Guelph’s little half brother Ghibellines who romped home at huge 40/1 odds.

Race 3 finish – Ghibellines is in the lead, before winning the Todman Stakes 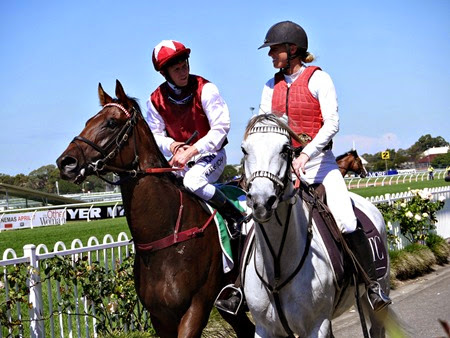 His big sister Guelph ran third in the last race, but I left the track directly after the Ranvet Stakes in order to be in time for the Astro Dinner, so regretfully missed seeing her in action as she apparently has since been retired.

In Race 4, the Reisling Stakes, the fillies equivalent of the Todman Stakes, Earthquake continued on her winning ways,  one of the few favourites of the day to score a win. 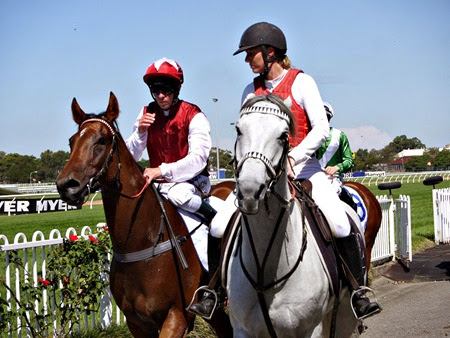 Earthquake returning to scale after winning the Reisling Stakes

The two Group One features were scheduled later in the afternoon, so I took the opportunity during the interval to explore the racecourse facilities and the stalls area, where Fiorente was being walked… …and Catkins was being prepared for the Coolmore Classic 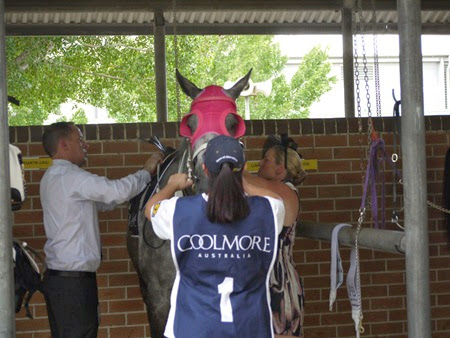 Catkins started as favourite for the Coolmore Classic, though at pretty good odds of $4.60.  She was denied her first Group 1 victory by Steps In Time who, ridden aggressively by Jim Cassidy, took off at the 600 and left the rest of the field behind, leading by several lengths. Sweet Idea closed the gap in the straight, but could not quite catch her. Catkins managed to run third. 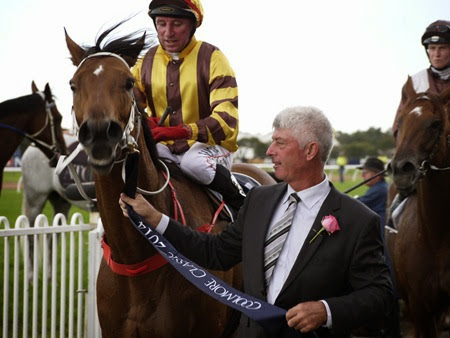 Steps In Time returns to scale after winning the Coolmore Classic

The Group One Ranvet Stakes was expected to be a match race between Fiorente and It’s A Dundeel, and they started as equal favourites. However, nothing in racing ever turns out how you would expect, and such was the case this time.

In my preview of the Ranvet Stakes in my last blog post I advised readers not to ignore Silent Achiever, and she proved me right. She pipped race leader, the Queen’s horse, Carlton House, at the post.  He took the lead early in the race and had put a good couple of lengths on the rest of the field by the turn. Silent Achiever raced up near the speed and somehow or other caught Carlton House on the line in a thrilling finish. It’s A Dundeel ran third, but was disappointing overall, as was Fiorente.

Carlton House looked a picture leaving the mounting yard, Kerrin McEvoy resplendent in the Queen’s silks. Carlton House has a completely different appearance to Australian and New Zealand bred horses. He was bred in the USA. 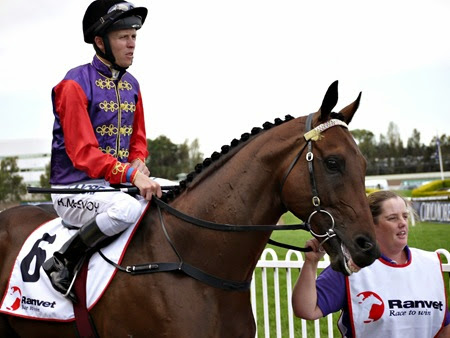 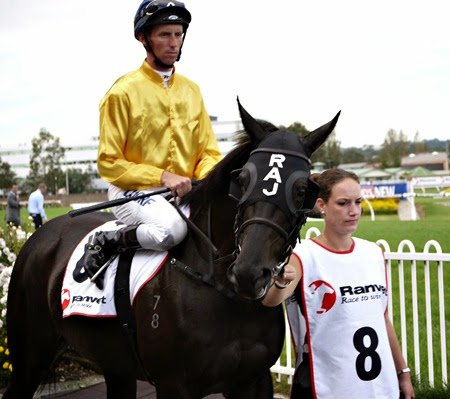 Ranvet heroine Silent Achiever on her way to the track

Unfortunately I didn’t get a good photo of It’s A Dundeel, but I did notice that even though he is still a small stallion, he has thickened out and certainly looked quite magnificent.

I hastened to the exit after the Ranvet, not even waiting for the horses to return to scale and spent the next hour or so travelling firstly by a bus, then by a train stopping all 15 stations to Central.

As I was feeling quite sweaty after a hot day in the sun, and greasy with sun screen, I decided to have a quick shower before heading off to the Astro Dinner…

Sounds like you had a lovely time. How great to have been able to meet those relations. Next time you should try coming to Canberra though I suspect it wouldn't be for our racecourse!

It was very enjoyable, and good to catch up with the rels. I'd need a good excuse to go to Canberra, perhaps the Folk Music Festival one year. One of my friends is going this year by herself,

You really have walked a history trail on your trip. That the train had to terminate at Olympic Park was another racing history land mark.

From 1841 the Sydney races were held at Homebush, which was part of the Wentworth estate, and remained there until 1859. They were relocated back at 'The Sandy Course' - better known today as Randwick in 1860.

Homebush was the home of the AJC which was formed to arrange the second annual meeting at Homebush in 1842. The actual location of the course was in walking distance north of Homebush station which opened in 1855. Prior to 1855 the crowds came to Homebush either by paddle steamer, coach or on horse back.

8,000 people attended the first Homebush races. The paddle steamer got stuck in the mangroves and patrons had to roll up their trousers and walk across the mud flat to solid ground while over 1,000 rode out from Sydney arriving in the paddock as one - that would have raised some dust !

Homebush is a station on the Olympic Park line, and curiously the station just after it (heading to OP) is Flemington, so my thoughts were on racing as the train passed through.

It's good to know in retrospect that I was treading on hallowed ground (racing wise).