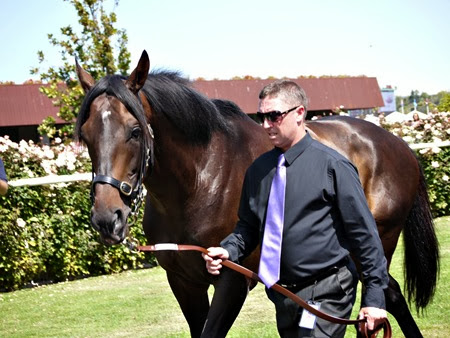 Super Saturday certainly lived up to its name with Flemington hosting a great afternoon of racing action that thrilled this dedicated race enthusiast for one. It was an afternoon for favourites to salute, and featured several exciting head to head competitions between rival horses.

Hearts and roses is an appropriate title for this post as the “love horse” Lankan Rupee blitzed the Newmarket Handicap field, and the last two Melbourne Cup winners, Fiorente (whose name means blooming in Italian) and Green Moon, fought out the Australian Cup up the rose bordered straight.

Arriving pretty early, shortly after 1.00pm, I was in time to watch the running of the Group 2 Sires Produce Stakes.  Though I didn’t have a bet on it, I was barracking for Marcado who I had included in my Star Stable. He ran third behind the winner Zululand and Awesome Rock, though only a length or so off them, so for the moment I won’t banish him from my stable.

I decided after that to check out the stalls and parade ring, and took the above photo of Fiorente and the following one of Lankan Rupee in his stall. 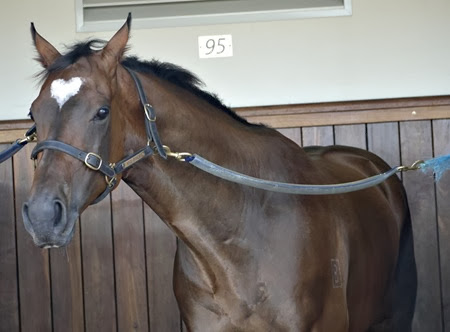 Lankan Rupee – highly recognisable with the heart on his forehead

I was also hoping to see the Living Legends representatives for the afternoon – Efficient and Zipping – but they hadn’t arrived at that time.

Meanwhile back at the track, Race 4 the Group 3 Schweppervescence Trophy was about to start. Bonaria started favourite and didn’t disappoint winning comfortably from Text’n Hurley and the amusingly named Bippo No Bungus. 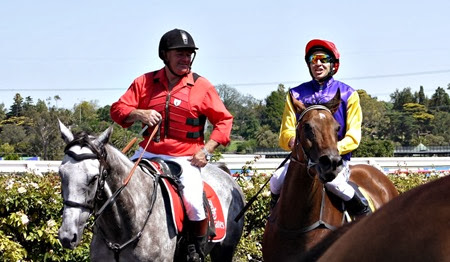 Bonaria returns to scale after winning the Schweppervescence Trophy

Returning to the stalls area I finally caught up with Fish and Zip. Their lovely strappers obligingly brought them out from their stalls for a pat. Efficient seemed more interested in eating the roses, but I snapped a few good photos of the pair of buddies together. 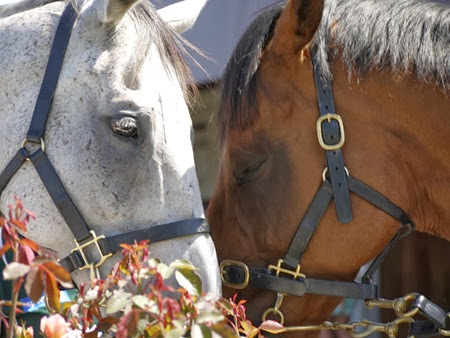 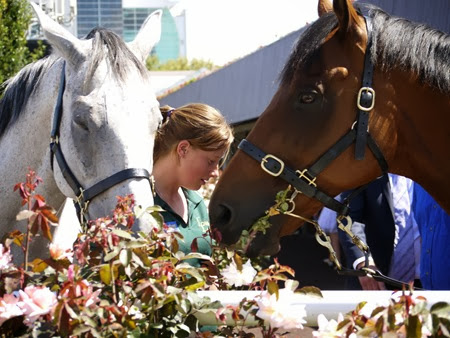 Efficient won the 2006 Victorian Derby and the following year won the Melbourne Cup.  I remember his Cup win vividly as an intuition half an hour before the race had me rushing to put a bet on him as the only grey in the race. He won me over $100 as he paid something like $25.00 for the win. His career was dogged by niggling injuries, but he managed to win the 2009 Turnbull Stakes and ran second in the 2012 Sydney Cup.  If he hadn’t been injured, who knows what he would have achieved.

Zipping was a grand old stayer who retired with a sterling record of wins and places in prestigious races. He won the 2010 Australian Cup and also the 2010 Turnbull Stakes and won the Group 2 Sandown Classic (which is now named after him) in four consecutive years (2006, 2007, 2008 & 2009), was placed in the Cox Plate three times, and has overall a great record of 16 wins, 10 places from 47 starts.

It was a great pleasure to make the acquaintance of these fine old gentlemen of the turf and to give them a pat.

Anyway, back at track, the field for Race 5 the Group 2 Kewney Stakes for three year old fillies was parading.

Solicit was the hot favourite after her 2¾ length win in the Vanity Stakes back in February. She was another of my Star Stable horses so I was delighted that she made it back to back wins with her Kewney Stakes victory. The seemingly eternal bridesmaid Marianne ran second again and Suavito was third. 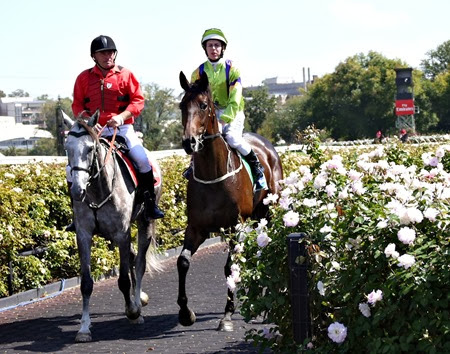 Solicit returns to scale after winning the Kewney Stakes

After the Kewney Stakes I hastened to the Bookies area to watch the Wiggle Stakes on the small screen there, which is the only place I’ve found at Flemington where you can watch the Sydney races. I had my first bet of the day, not on Catkins who was odds on favourite, but on Dear Demi who was at really good odds for one her class – investing $2.00 each way. Catkins won really easily. She has come on in leaps and bounds over the past year and looks primed to win a Group 1 this season. She has been known as the punter’s friend, always starting at good odds up until now. I know, I’ve won lots on her in the past when she has been underrated in the betting. Dear Demi managed to run third and payed very well for the place, doubling my outlay. By the way, Catkins is in my Star Stable too, so I was doubly pleased with her win.

The first of the Group 1 races for the afternoon the Newmarket Handicap was the next scheduled race.  I put money on both Samaready and Lankan Rupee as they were my top two picks. Lankan Rupee, courtesy of a superbly judged ride by young jockey Chad Schofield, was sensational. He won by 2½ lengths from Spirit of Boom and Knoydart, which interestingly is the exact same order the three of them finished in the Oakleigh Plate. Lankan Rupee paid a very generous $6.00 for the win, so my pockets were enriched by his payout. And you guessed it, he’s another of my Star Stable horses. 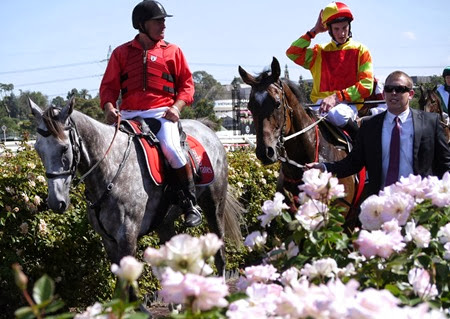 Lankan Rupee returns to scale after winning the Newmarket Handicap

Shortly after the Newmarket Handicap, the Group 1 Chipping Norton Stakes was due to run in Sydney, so I returned to the bookies area to watch it.  Boban had a turnaround of form, or maybe it was just his regular jockey Glyn Schofield (Chad’s dad) being back on board, but he denied It’s A Dundeel a first up win.  Dundeel was probably let go too soon, which left him a sitting duck for the swooping Boban, or  he was not as fit as Boban who had two runs under his belt. I was disappointed, but I won’t banish him from Star Stable yet.

The Australian Cup was next up, so after placing bets on Fiorente as a dead cert, and Voleuse De Coeurs as a ruffie, I made my way back to the mounting yard to watch the parade. 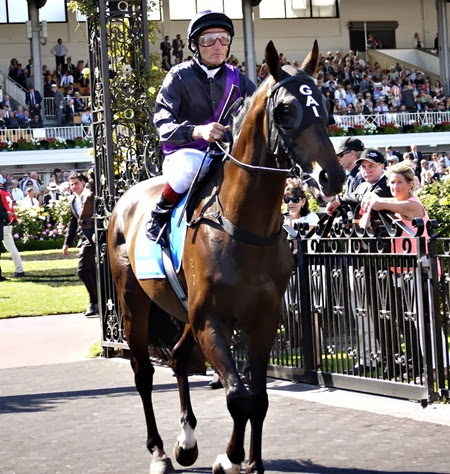 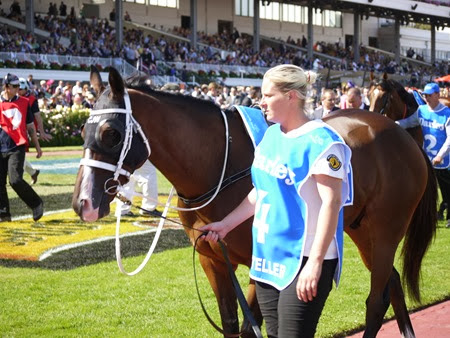 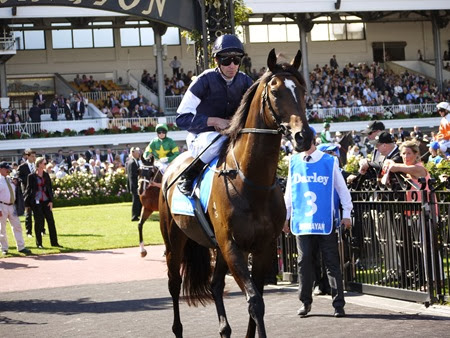 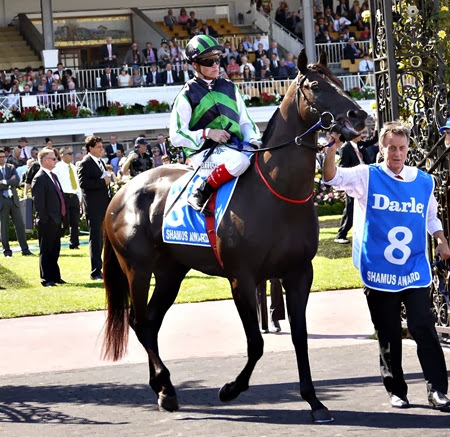 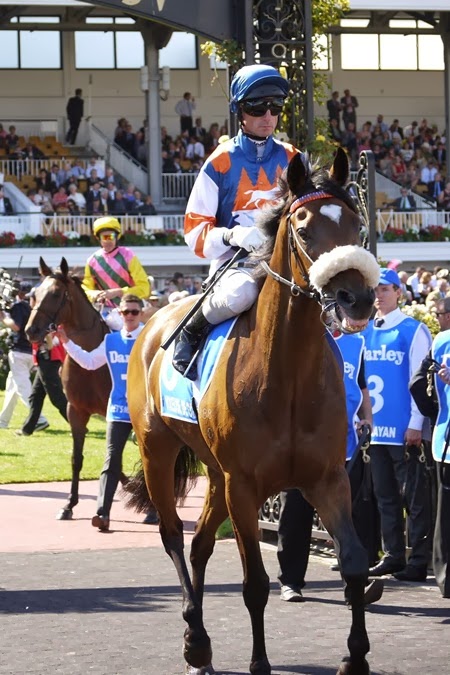 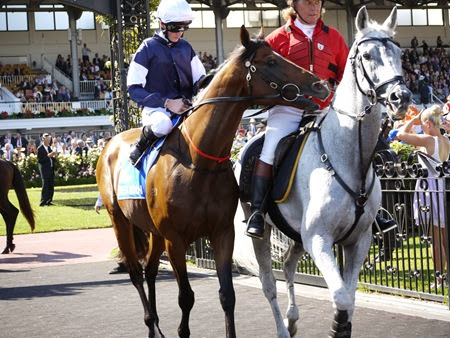 Shamus Award as expected raced to the front and led for most of the race with Green Moon running close behind him in second spot along with Star Rolling. Fiorente was towards the back of the field until halfway up the straight, then Damian Oliver eased him wide and let him go. He exploded away and he and Green Moon fought it out down the final stretch, with Fiorente proving too strong in the end, scoring by half a length. Shamus Award was no match for the seasoned WFA performers, fading to finish sixth. 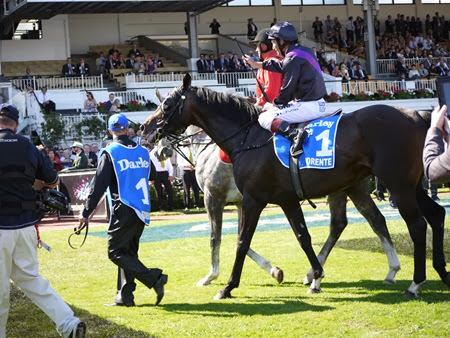 Fiorente returning to scale after winning the Australian Cup

Last year’s Group 2 Blamey Stakes ended in a draw between Budriguez and Puissance de Lune.  This year’s edition resulted in a clear win for the Peter Moody trained Lidari. My money was on the Lloyd Williams Irish import Foundry, who had won his first race in Australia at Flemington in February. He fought on bravely for second going down by a length and Sertorius, the favourite, finished 4 lengths behind in third spot. 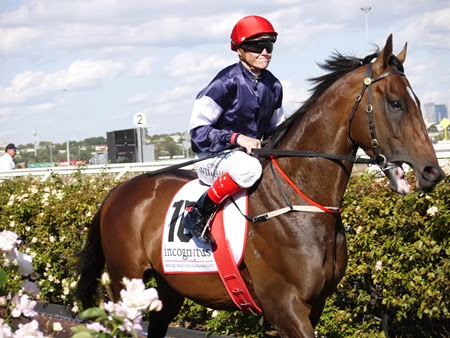 Foundry on his way to the barriers

After collecting my winnings on Foundry, I called it quits and headed up the long stairs to the station. It was a long day, and I certainly got plenty of exercise during the afternoon, as the vast expanses of Flemington mean you have to walk quite a way to place a bet or get a drink.

There were plenty of people there, but it was not unbearable or overcrowded as it was on Derby Day, and the sun shone down all afternoon.  And the roses as usual were blooming in gorgeous array. 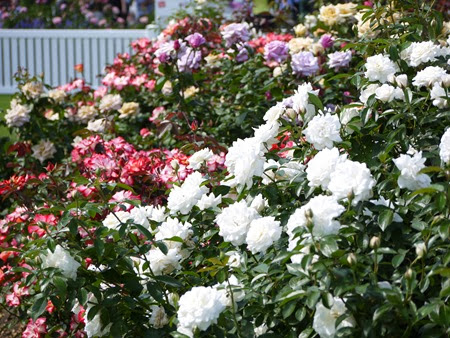 It was indeed a super day to be at the races, and for a change I came home with more money in my purse than I left with.

The focus of racing moves to Sydney from now on, and even if I will not be attending any local races, I’ll be closely following the Group 1 action at Randwick and Rosehill.