Celebrating the Year of the Horse at Caulfield 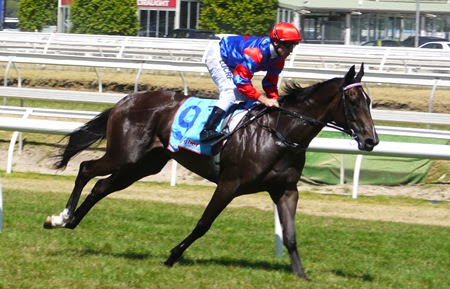 With the first Group One on the autumn racing season scheduled to run next Saturday, I thought I would get into the spirit early, so attended the race meeting at Caulfield last Saturday. The race card was quite interesting with a couple of  Group Three races on the program, these being the Chairman’s Stakes for two year olds and the Manfred Stakes for three year olds, so I made sure I arrived at the course in time to watch them.

As Melbourne Racing Club has in their dubious wisdom decided to start the races at a later time than normal, I could take my time getting there. It was a hot and sunny day, and felt much hotter than the low
30°C temperature recorded.

I arrived in plenty of time to watch the running of the Chairman’s Stakes, where the Gai Waterhouse trained filly Nayeli started as hot favourite.  She’d had one win for one start, and proved she was a cut above the other contestants winning the Chairman’s Stakes by two and half lengths from Bugatty. Her name means “I Love You” in ancient Mayan. 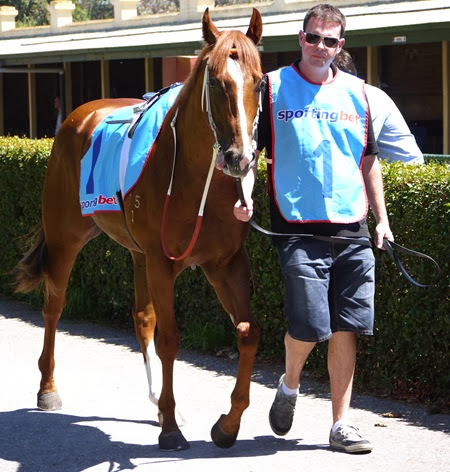 Bugatty in the parade ring 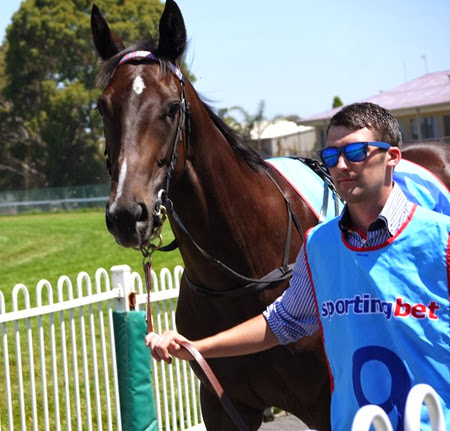 Nayeli on her way to the mounting yard.

Gai Waterhouse managed to get two winners last Saturday at Caulfield, as did Darren Weir, so it would have been canny to back runners by the aforementioned trainers. Alas I didn’t and my bets were all unsuccessful.

The next race (Race 5) on the cards was the Ian Miller Handicap, a race over 1600 metres for fillies and mares. I had my money on Spellrocker, who led for most of the race only to be overtaken in the straight by the Darren Weir trained Five All, followed by Text’n Hurley and Are There Any who finished second and third, relegating Spellrocker to fourth place.

Race 5 down the straight – Spellrocker (rails) is being over taken by Five All on her outside.

Race 6 was the most interesting race on the program. The Manfred Stakes is for three year olds and run over 1200 metres and this year’s edition had attracted a classy field that included Prince Harada, Fast N Rocking, and Waterhouse colt Bull Point. Prince Harada was out to emulate his sire Haradasun who won this race in 2007, and started warm favourite. He’s grown since I last saw him, and looks a magnificent specimen of horseflesh.  He was disappointing however, fading in the straight to finish fourth. Bull Point was the victor beating Worth A Ransom by 1½ lengths with The Quarterback running third. 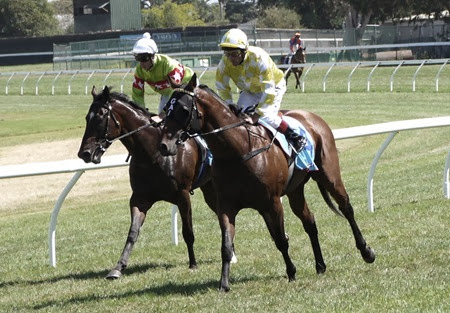 I stayed for Race 7 as I was interested in seeing highly regarded colt Lord Of The Sky who was on a winning streak up to Saturday, having won his previous three starts by good margins.  I caught up with him in his stall being saddled up for the W J Adams Stakes (1000 metres). 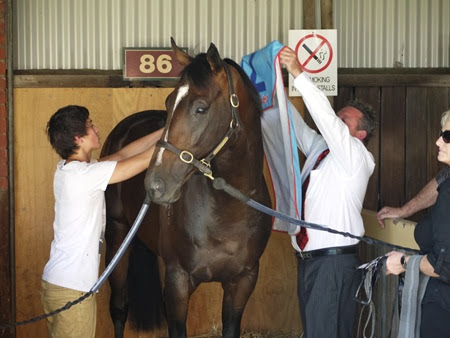 Lord Of The Sky started short priced favourite, but after being slow away, he never really fired and finished last. Shamal Wind lived up to her name flying like the proverbial to snatch victory on the line from General Truce with Brilliant Bisque running third.

Unfortunately Kiss A Rose collapsed and died in the mounting yard after the race, which would have been distressing to see. But I was heading to station by that time so was spared witnessing the tragedy. The cause of her death is unknown, but Racing Victoria have said it was not heat related.

Next Saturday's races at Caulfield kick off the Melbourne summer/autumn racing  season with the Group One C F Orr Stakes being the feature race. Equally mouth watering are the two Blue Diamond Preludes, where we will get to see the current first and second favourites for the Blue Diamond Stakes in action. Rubick who impressed in his first start a couple of weeks ago, will be facing off with the interesting Nostradamus in the colts Prelude, and Earthquake who also won her first race in style back in November last year will be starring in the fillies Prelude.

Currently the forecast for next Saturday looks dire – a hot 38°C is predicted. I sincerely hope it does not come true, but I’ll attend anyway and try and keep cool, and cross fingers for horse health and safety.