A year with the Russian Princess

Talya asleep at the foot of the bed – I love the blend of colours which complement her grey fur.

Tomorrow marks the first anniversary of our adoption of Talya, the Russian Blue princess, and I must say it has been mostly a pleasure having her as part of the family. She’s a lovely looking cat with a sweet nature as far as humans are concerned, but is a bitch to other cats.

It’s a pity that her relationship to Willy still needs the kinks ironed out, but at least the occasional hostility between the two of them has not resulted in any collateral damage.  Fur is intact, attitudes remain suspicious.

Last night, whilst we were reading in bed, Willy was leaning against my legs, when Talya jumped on the bed and indicated that she wanted to curl up there too. When she was choosing a spot her tail every so often brushed against Willy - eek, she’s touching me! –  to his horror. Talya eventually settled down, curled a few centimetres away from Willy leaning against B’s knee and all was peaceful as both cats went  to sleep.

Snapped with my iPad, so picture is not perfect.

Talya has recently taken to sleeping on my pillow at night, which is a dangerous practice, as Willy uses the route across my pillow to climb under the blankets. We were woken in the early hours of the morning recently by a terrific shriek followed by a scuffle, as the inevitable occurred.  It makes me nervous. I certainly don’t want a cat fight on my head in the middle of the night, so I’ve been discouraging Talya from sleeping there. She has a perfectly comfortable bed in the computer room on top of the dresser… 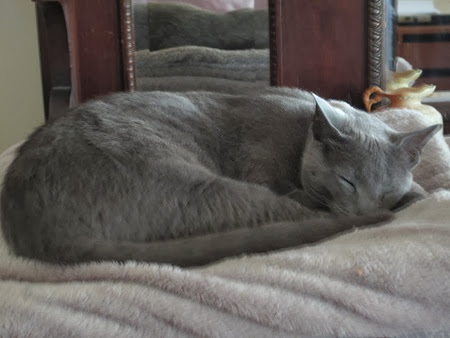 …but with the usual contrariety of cats, she won’t sleep there if she doesn’t want to.

The cats coped well with the extreme heat last week, Talya mostly staying indoors where the evaporative cooling system provided relief from the 44°C outside. Willy chills out under the house in hot weather, as he appears to be disturbed by the fan blowing cool air.

However, the local possums were zonked. I was out in the backyard the other afternoon crumbing old bread crusts for the birds, when I heard a rustling in the trees by the fence, and a small brush tailed possum staggered onto the fence, looking very distressed. It  crawled under the water tank, and we don’t know if it survived or not.  No doubt we’ll find out soon enough, if and when a corpse makes an assault on our olfactory senses.

Thank goodness it’s cooled down this week, a relief after a week of 40°+ temperatures, though one expects it in Melbourne during summer.

I’m hanging out for the start of the autumn racing season. So far this year the racing scene has been pretty dull, though I have been assessing the young contenders for the Blue Diamond Stakes and Golden Slipper as they prepare for the big races. A few have attracted my interest – Unencumbered for one, who took out the Magic Millions Two Year Old Classic. He shows great promise. Another is Nostradamus who had his first start last Saturday and won it easily after missing the start.

I was disappointed to read that my favourites Super Cool, Fiveandahalfstar and Puissance de Lune will not be racing this autumn, for one reason or another. It’s A Dundeel however will be back, but only in Sydney. Hopefully Fiorente will come to Melbourne to contest the Australian Cup, but I fear that in Melbourne we’ll miss seeing several equine stars, with most of them being kept in Sydney to contest for the bumped up riches of its carnival.

It’s early days yet, so I’ll wait and see if it will be worth attending the track in a few weeks time.  Who knows what new stars of the turf will emerge this autumn.

I got through the hot spell because I only thought about all the possums, and the pets belonging to thoughtless 9-to-5ers, and the kangas at Zumsteins.
My cat went under the sink and stayed there. I do know what a catfight on the pillow is like at 3am because poor old Kitty has started to fight with her invisible trespasser. bit scary for the sleeper underneath. I think it must be feline dementia.
Congratulations to Willie for his Year Of Tolerance.
Plenty of horses on Pinterest where I am addicted. One chases and catches a Frisbee, and there is a racehorse who goes everywhere with his stuffed to crocodile hanging from his teeth.
x x iODyne

Our dear old Lizzie cat who was 16 years old developed senior feline dementia, but she didn't have any imaginary enemies.

Willy has been very gentlemanly towards Talya, but sometimes she drives him to lose his temper, then watch out Talya!

The super colt Unencumbered's stable name is Cucumber, which ticled my fancy. How could you not follow a him!

Love the story of your cats Anne. And I do hope, for your sakes if to for its, that that possum survived. It was hot here too, and our cool change took a couple more days, but we were 37-40, not over 40!