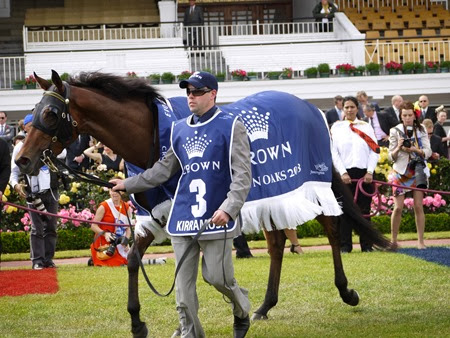 Kirramosa in the winner’s rug after the Crown Oaks

Oaks Day at Flemington is touted as being one for the girls, and certainly attracted quite a number of the fair sex, dressed in their finery and extravagant headgear, but it seemed to me there were as many blokes present as women.

I must have been the roughest dressed lady at the track – a sparrow among the peacocks - as I have no interest in fashion and wouldn’t be seen dead in a fascinator.  So I went in my usual jeans and t-shirt and sensible shoes. I’m not there for the fashion, I’m only there for the horses.

This was the first time I have attended the Oaks meeting, and I must admit I enjoyed it. Perhaps backing a winner in my first of  two bets on the day gave it that extra sparkle. Anyway, it wasn’t as crowded as it was on Derby Day so it was easier to move around and it certainly was colourful. The ladies below – tatts and all -  sitting on the public lawn, are a veritable rainbow. 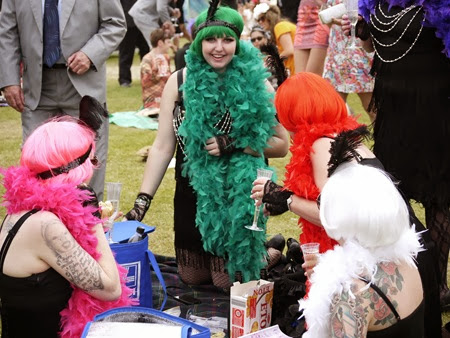 I got to Flemington just before Race 3 and watched from my usual spot on the fence by the path to the mounting yard. It was the Heritage Stakes, a 1200 metre race for three year old fillies. It was won by 10/1 shot Melrose Place, with the equally long odds Sense of Hite and Fare Well running the minor places. 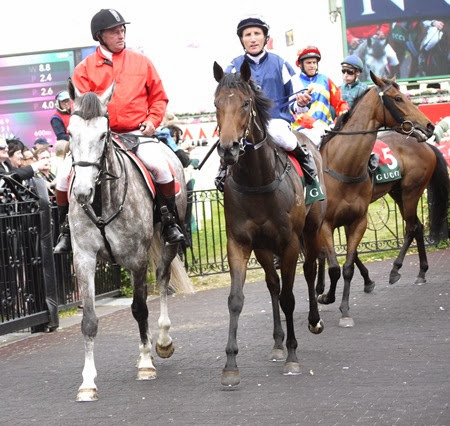 Melrose Place returns to scale after winning the Heritage Stakes

I was really interested in the next race, the Group 3 G H Mumm Stakes, because Dystopia, a Sydney mare I have been following for years, was making a rare appearance in Melbourne.  She’s part of the Chris Waller stable, and gave Chris Waller his third win of the day with her victory in the Mumm Stakes.  His other winners were Marmelo in the first race, and Multilateral in the second.  Myself, I was delighted that Dystopia won as I’d bet on her at fairly good odds. Shamal Wind ran second with She Can Skate taking third place. 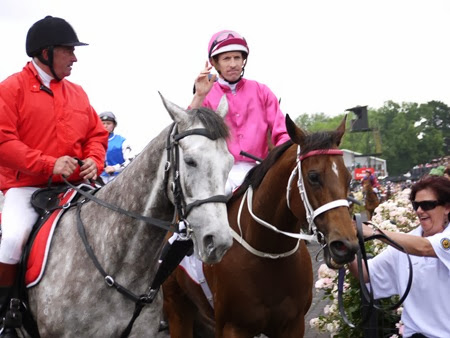 Dystopia returns to scale after winning the Mumm Stakes

The final race in the Subzero Challenge was the next on the cards, and old Subzero led the large field of grey horses out to the mounting yard. This was the race where the winner’s strapper got king hit by a stable hand (I have since read it was a domestic matter). I did not witness the incident, but I did photograph the winning horse Black Cash returning to scale. 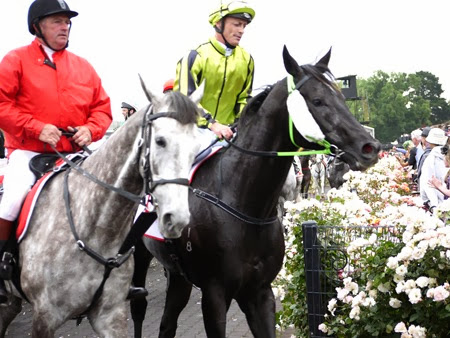 Black Cash returning to scale after winning the Subzero Challenge

Race 6 was the feature race of the day. The Crown Oaks is a race for staying fillies run over 2500 metres.  Dear Demi won it last year and previous winners have also been the top fillies of their time – Miss Finland, Samantha Miss and  Mosheen for example.  This year the favourite was Wakeful Stakes winner Kirramosa. I must admit I had not heard of her before as she has done most her racing in Sydney.

I decided to reinvest my winnings on Dystopia in a boxed first 4 of Kirramosa, May’s Dream, Solicit and Zanbach.  May’s Dream let me down and surprisingly finished out of the first four. Curses! I should have boxed them for a trifecta instead, as Kirramosa prevailed, narrowly winning from Zanbach and Solicit. 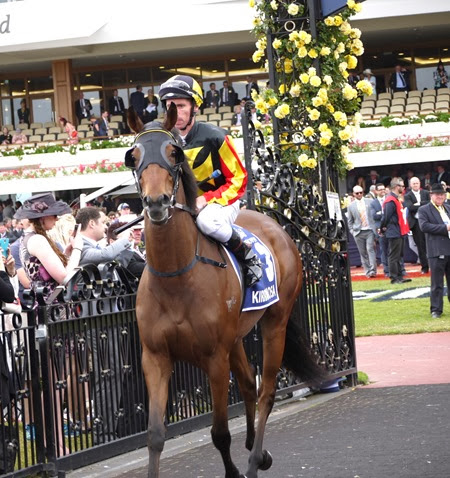 Kirramosa on her way to the track

The rest of the race card wasn’t all that interesting, so I headed home after the Oaks, pretty happy with my afternoon at the track.

The first of the Group 1 races is the VRC Sprint Classic. It was known for years as the Patinack Farm Classic, but as Patinack  is no longer the sponsor,  the name has been changed. It’s run over 1200 metres and has been won by champion sprinters, most notably by Black Caviar in 2010 and 2011.

This year’s edition has a crack field that includes Hong Kong star Lucky Nine, Buffering, Epaulette, Sessions and Rebel Dane. Buffering finally won his first Group 1 in the Manikato Stakes at Moonee Valley in late October, narrowly beating Lucky Nine with Sessions running third. Lucky Nine didn’t really handle the tight corners at Moonee Valley, so will appreciate the long straight at Flemington and will most probably turn the tables on Buffering this time.  Buffering has had two previous attempts at winning this race and finished 8th last year, and 2nd in 2011 behind Black Caviar. He may have a hope of beating Lucky Nine if the track degrades to slow. Currently that is unlikely as there has been not enough rain in Melbourne today to really affect the ground.

The other Group 1 race is the Emirates Stakes, which is run over 1600 metres. It has resulted in some long shots winning in past years. The underrated Happy Trails won it last year, and Albert The Fat the year before and famously the 100/1 shot Tears I Cry in 2007.

The Chris Waller trained Boban will start as favourite, and rightfully so, looking at the picket fence of wins next to his name on the form guide. Also in with a chance is his stablemate and Doncaster winner Sacred Falls, and Toorak Handicap winner Solzhenitsyn, and last start winners Smokin Joey, Toydini, Spurtonic and Mouro. Old favourite Linton also has a chance if he can repeat his Stradbroke Handicap performance. And for Country Music fans, there is a New Zealand horse called Nashville who appears to have excellent form in his home country. Overall it looks to be a doozy of a race.

Of interest is the Queen Elizabeth Stakes, a Group 3 race over 2600 metres. Puissance de Lune won it in spectacular fashion last year, which catapulted him into early Melbourne Cup favouritism.  This race is a sort of consolation prize for stayers who didn’t make it into the Melbourne Cup. So you’ve got Precedence, who just missed out, despite winning the Moonee Valley Cup and Kelinni who ran 4th in the 2012 Cup, as well as Shoreham, Sertorius and Forgotten Voice.

The most interesting runner however, is Makybe Diva’s little three quarter sister La Amistad, who will be trying to emulate her famous sister who won the Queen Elizabeth Stakes in 2002 before going on to win the 2003, 2004 and 2005 Melbourne Cups. La Amistad has been very lightly raced, and now four years old has only run five times on country tracks, for two wins, a second and third.

So the grand finale of Melbourne’s spring racing carnival should see it out in fine fashion, race wise I mean. I’ve been getting good value out of my Flemington season’s ticket, which fortunately covers me for the 2014 summer/autumn racing season. I’m rather regretting now that I didn’t go to the Melbourne Cup, but perhaps I’ll make it next year.