A Great Conundrum – The Melbourne Cup 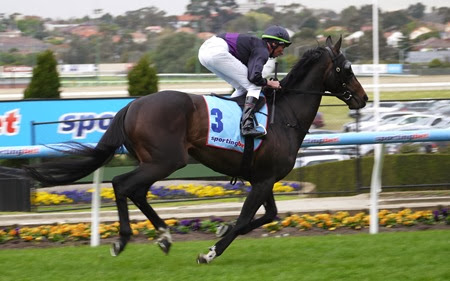 Fiorente – Can he win Gai Waterhouse her first Melbourne Cup?

Trying to find the winner of the Melbourne Cup these days is an impossible task.  I have not come anywhere near in the past few years, so am pretty pessimistic about my ability to do so this year. However, I’ll give it a go and name my fancies.

Of the field of 24 runners, only 5 of them are locally bred. Of course I would love for one of them to win the race and three of them have the Zabeel factor that has produced Melbourne Cup winners for many years. The most likely of the five locals is Caulfield Cup winner Fawkner.  Fawkner is by Reset who was sired by the great Zabeel, so he has the breeding to run the trip. I also think his name is somewhat of an omen in that it evokes Guy Fawkes for me, and tomorrow, Cup Day, is the 5th November, known in the old days as Guy Fawkes Day or Bonfire Day.

Another local with the Zabeel factor is tough mare Dear Demi. Her sire Dehere is generally regarded as a producer of sprinters, but her dam Shirley is by Zabeel. Dear Demi has been in great form this spring and is a good lightweight chance if she can run the distance.

Ethiopia is the other runner with the Zabeel factor, but he is given little chance as his form has been uninspiring for over a year. He hasn’t won anything since taking out the ATC Australian Derby in 2012.

The other two locals are my favourite Super Cool, who has been somewhat disappointing this spring and failed Caulfield Cup favourite Hawkspur.

Lloyd Williams has entered six of his horses in the Cup. Including Fawkner, there is also Sea Moon, last year’s Melbourne Cup winner Green Moon, Masked Marvel, Seville and Mourayan. With the concentration of numbers, and considering his record in the race, you’d think one or other of his contenders would be in the finish. Green Moon won with 54.5kg on his back last year, but this year carries 3 extra kilograms. There is some doubt as to whether Sea Moon can run 3200 metres, as he only just won over 2400 metres in the Herbert Power Stakes at his last start. Mourayan can certainly run the distance, having won the Sydney Cup earlier this year, but he is getting on in years and has tried and failed in the Melbourne Cup before. As for Masked Marvel, the jury is still out as to his class, despite his winning the St Leger Stakes in 2011. I love his name though. Lastly, Seville won the Metropolitan in early October and has been nominated by the Williams clan as their top pick.

If you were going to bet on a horse due to his looks, you couldn’t go past Fiorente. He ran second in the Melbourne Cup last year, and is probably the top pick on form to take out the race this year, having been very competitive this spring, winning the Dato Tan Chin Nam Stakes and running third in the Cox Plate. I’ll certainly have a little something on him tomorrow.

Of the International entries, it’s hard to gauge their form against Australian conditions, but Brown Panther is highly regarded as is Dandino who ran second in the 2013 Caulfield Cup.  The two mares Verema and Voleuse de Coeurs will no doubt be attractive betting propositions for the girls and with a weight advantage could well feature, or even win. It has been quite a while since a mare took out the Cup; Makybe Diva was the last mare to win in 2005, famously her third consecutive Melbourne Cup.

To sum up:
Who I’d like to win: Fawkner, Super Cool, Dear Demi or Voleuse de Coeurs

Who I think will win: It’s between Fiorente and Fawkner

Astrologically, the moon in Sagittarius at the time of the running of the Melbourne Cup, might provide a clue. The sign Sagittarius is associated with horses, so one of the “Moons” may prevail. It would be an uncanny coincidence if this were the case.

Finally a snippet from the past – 50 years ago – the 1963 Melbourne Cup field. Notice that the Cup was run on the 5th November that year as well. 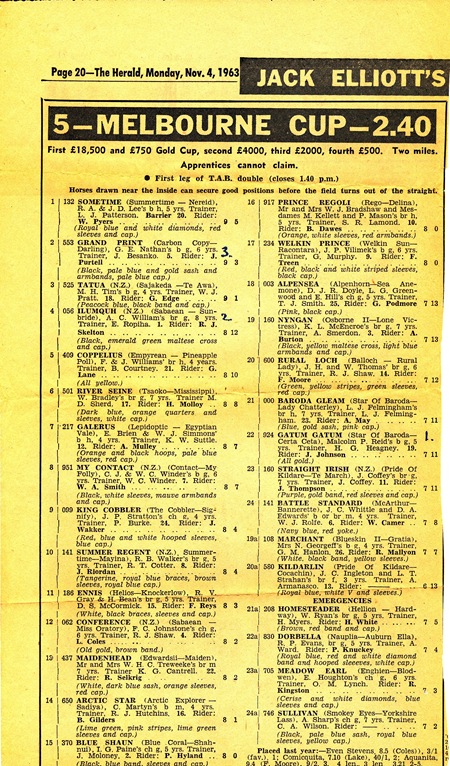 With that, I wish readers of this blog the best of luck in  picking the winner of the 2013 Melbourne Cup.

The human snorters in the Birdcage carpark still really miss Tony The Wig Mokbil.
My wish for Cup Day is that there are no equine injuries of any degree, and that Showgirl Edelsten has her mares covered
and that you have a good day.

It's really tricky naming a racehorse and you submit 10 choices for the authorities to tell you which one you can have. Soon those Word Verifications will be used, as I thought the one I just got was a go-er: Stookeigh (out of Stood Up, by Oakleigh Boy).

And they're off and racing in the 2014 Fosters/Myer/Cash Converters Melbourne Cup.

My new WV is Tyluticl

Yeah, I agree about the ridiculous names of racehorses these days, e.g. Not listen in'tome. It could be a word verication. The one I've got is ughtsrg, which my iPad spellcheck corrected to ugh tart .

I love the Aus Stud Guide.
an Irish Stud (now famous tourist destination) built about 1905 has opening roof so the moonlight can shine on the horseys because the owner thought phases of the moon affected performance.
I made money off this by looking up the horoscope for Makybe's Foaling Date when she had her 2nd MCup win.
Have a good day with the racebook.

I actually meant autocorrect but the term escaped me at the time.

I've been subscribed to the stud book for years. It's a great source of interesting information.

well Gai did it. wish I could have been within hearing of Singo at the time.

I'm really pleased with Fiorente's win. He's a beautiful looking horse, the type when you see him walking past, makes you look twice.

But it is tragic that Verema broke down during the race and was later put down. Takes the shine off the day that does.

poor thing. probably given too much Vitamin B.
I have seen no visual and scooged over the sub headings. Still not recovered from Leilani 30 years ago.

It's a BIG celebration dinner.