As has been the case all through the Melbourne spring racing carnival, the weather was kind for Cox Plate day, overcast but free of raindrops. Good conditions, lighting wise, for taking photos, and I took a great many, which I spent most of yesterday sorting.

I arrived at the track shortly before Race 4 the Drummond Golf Handicap. which is run over 2040 metres. I took up my normal spot on the fence near the top of the straight, which as usual was relatively uncrowded. I’d placed a bet on Queensland horse Rothera, but alas he finished unplaced. The race was won by 7/1 shot Hvasstan from Bel Thor and Grand Sai Wan. 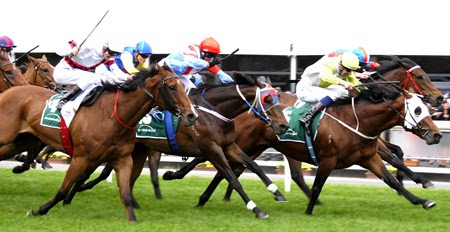 Rather than linger meaninglessly on the lawn I made my way to the stalls area. Most of the contenders for the Cox Plate had not yet arrived, but there were other horses to see. December Draw was being walked by his strapper and hanging around outside his stall. He’s a very friendly fellow and I was able to give him a pat. Later, so I was told, he put his head over the fence and tried to eat a spectator’s tie. 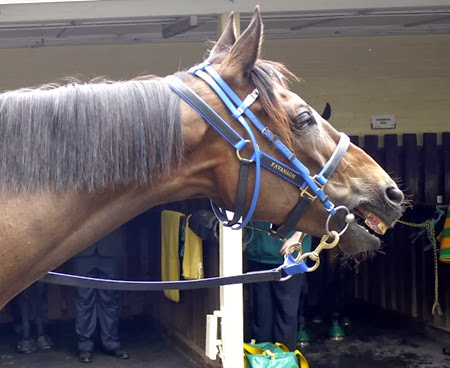 December Draw having a quiet laugh

It’s A Dundeel was in his stall, but the area in front of it was crowded with interested bystanders vying for position with cameramen, so I moved on.

However, especially at the track for the occasion from Living Legends was dual Cox Plate winner Fields Of Omagh. He won the race in 2003 as a six year old, then again in 2006 at the age of nine; the oldest winner in the race’s history. Ironic really, considering that Foo (as he was affectionately known) led out the 2013 Cox Plate field, and the race was won by a so called maiden, i.e. a three year old who had yet to win a race, for the first time. 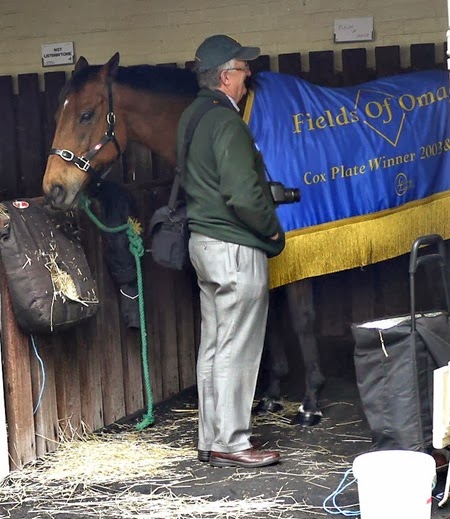 Next up was the Group Two Mitchelton Wines Vase, a race for three year olds over 2040 metres. Super Cool won this race last year from It’s A Dundeel.  This year’s edition had Savvy Nature, runner up in the Spring Champion Stakes, as the warm favourite. 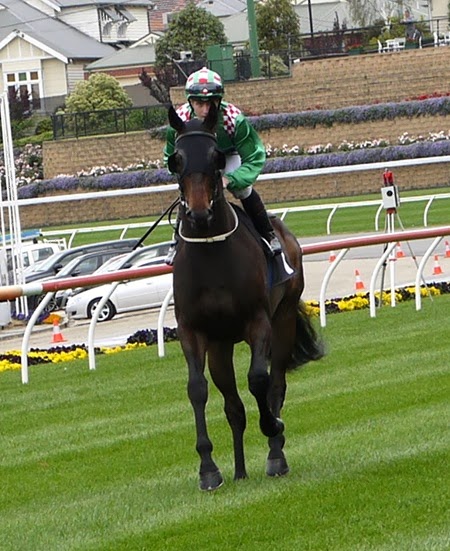 Savvy Nature on his way to the barriers.

He didn’t disappoint his fans, winning by 2½ lengths from All Rigged Up with Pinstripe Lane three lengths away in third spot. Savvy Nature will tackle the Victoria Derby next Saturday. 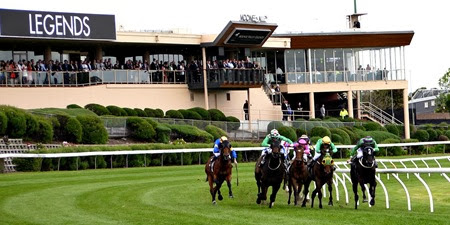 Rounding the corner into the straight in Race 5 – Savvy Nature is wide (second from the left ) about to take off.

Back in the stalls area a few more horses had arrived, most notably Fiorente who is a magnificent looking beast.  He was walking around in his royal purple rug… 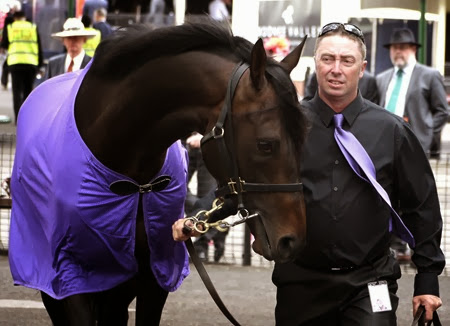 Fiorente in the walking ring

Whilst I was admiring him, his trainer Gai Waterhouse came into the stalls area. The next photo is of her with Fiorente and his handler that cries out for a caption. 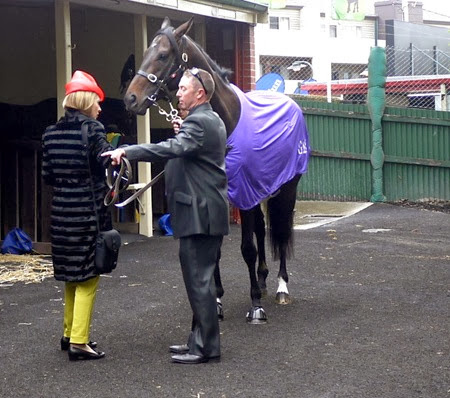 Back at the fence, Race 6 the Group Three Telstra Phonewords Stakes was about to begin. It’s a sprint over 1200 metres and Not Listenin’tome was the favourite. The Peter Moody trained Thermal Current denied him victory. Long shot Selectify ran third. I was on Diamond Oasis who finished fifth.

Down the straight in the Telstra Phonewords Stakes

And so the day progressed, quite quickly actually, building up to the grand finale of the Cox Plate which was scheduled as Race 10.

Race 7 was the Drake International Cup, formerly known as the Moonee Valley Cup. It’s one for the stayers, run over 2500 metres.  The Bart Cummings trained Precedence scored a rare win, repeating his success in this race in 2010. If he can beat the ballot he will be Bart’s sole Melbourne Cup runner.

The Schweppes Crystal Mile was the next race on the agenda. Having had no luck with my bets so far during the day, I eschewed betting on anything in this race, saving my remaining dollars for the next race and the Cox Plate.  I photographed the runners who came my way as they proceeded to the starting gates. 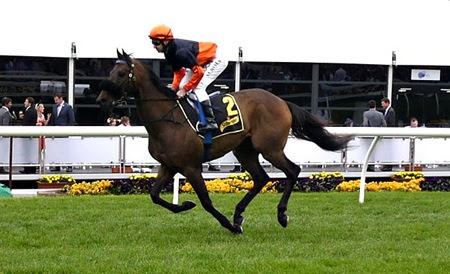 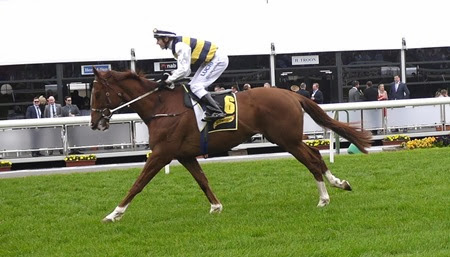 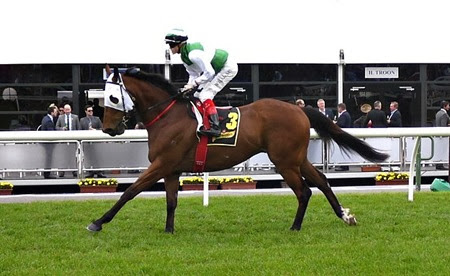 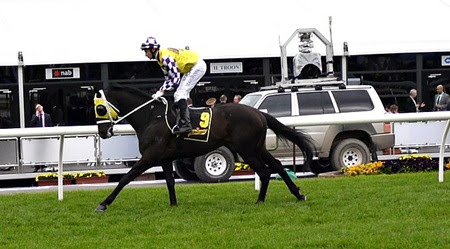 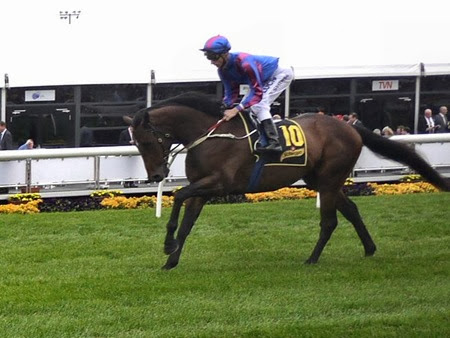 Down the straight in the Crystal Mile – Toydini coming hard down the outside is about to take the lead.

I was looking forward to the next race, not only because it was the last race before the Cox Plate, but because one of my favourite mares, Catkins, was running in it, having her first trip over 1600 metres.  She passed the mile test with flying colours, winning comfortably from Cameo and Lake Sententia. As Catkins started at good odds her payout covered all my previous losses. 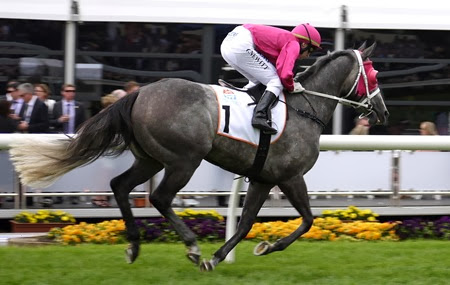 After collecting my winnings on Catkins, I wandered back to the stalls area to watch the Cox Plate contenders parade.  As I proceeded to and from trackside to stalls, I had to pass the live music stage, where a pair of artists were entertaining the crowd with covers of old Aussie rock songs. They were doing Men At Work’s Land Down Under when I snapped this photo. 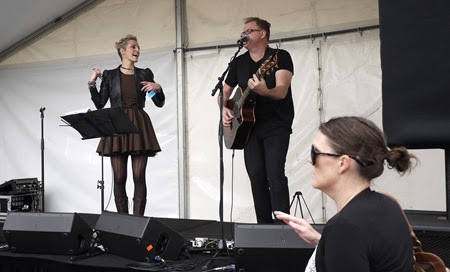 Still on a musical note, as I was watching the Cox Plate parade, Mark Seymour sang a stirring and quite wonderful rendition of the famous Hunters & Collectors song Throw Your Arms Around Me.

I hummed along as I photographed the horsey stars… 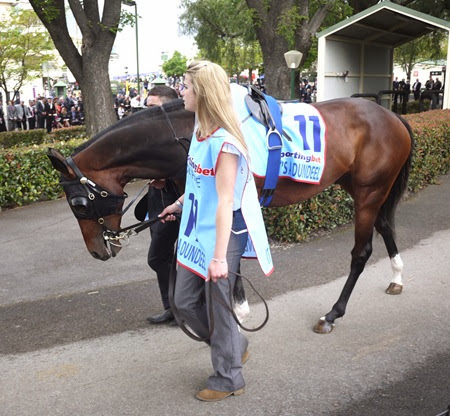 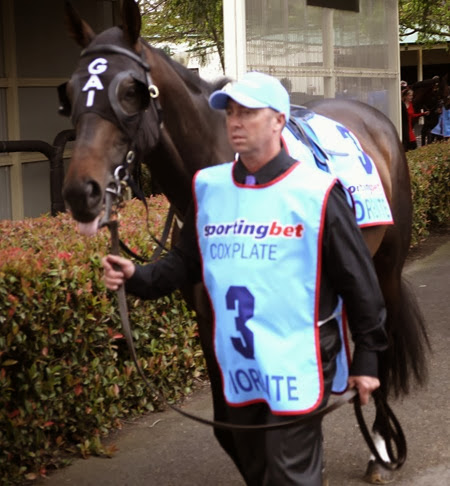 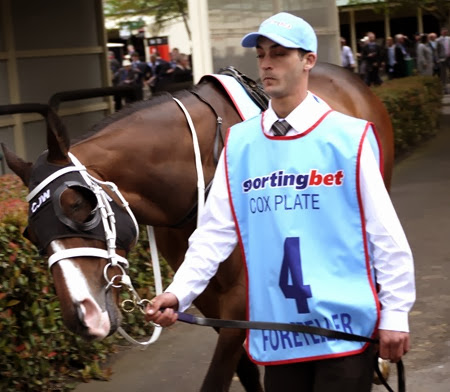 Foreteller -  a bit of a wag 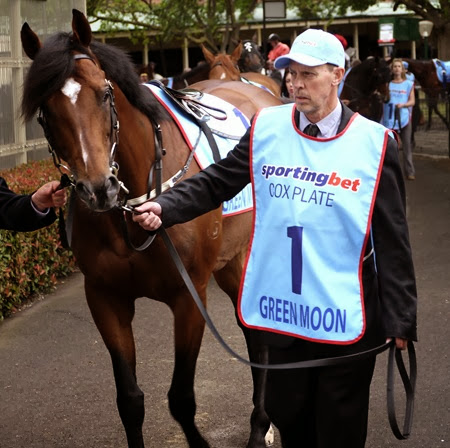 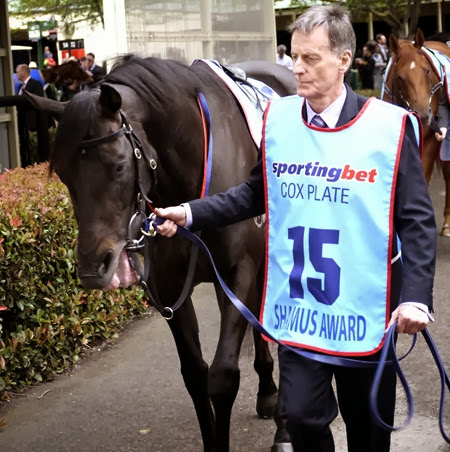 Shamus Award – the only photo I managed to get of him 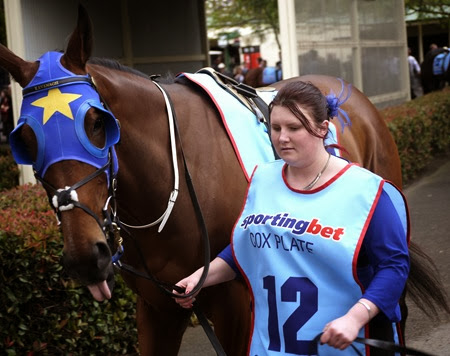 Super Cool – laidback as usual with his tongue poking out

Back at the top of the straight on the fence, my acquaintance of the afternoon, a sports teacher with a similar enthusiasm for horse racing as myself, was saving my spot.

The excitement was building as the time of the race drew near. The trumpet signalled the warning that the horses were about to move onto the track. Old Fields Of Omagh led them out and they cantered to the barrier stalls which for the Cox Plate are at the top of the straight. 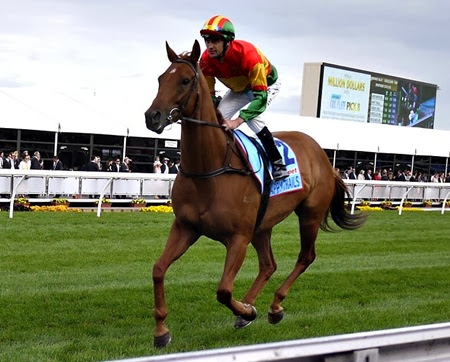 Happy Trails gallops past to the barriers 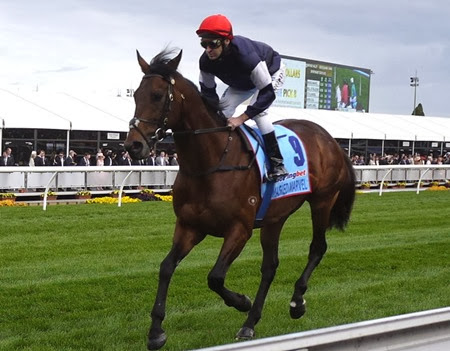 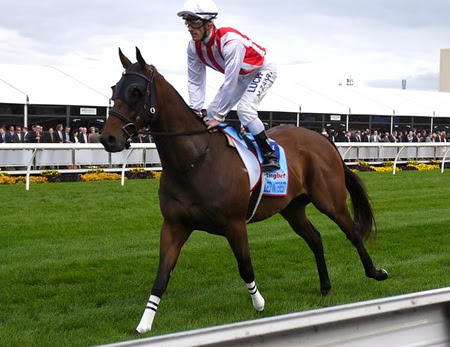 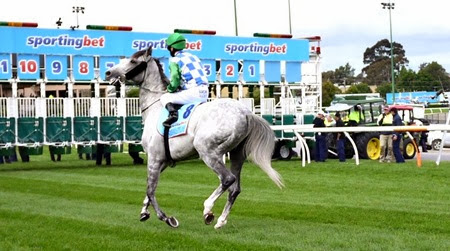 As is public knowledge now, Shamus Award, who had not won a race before in nine starts, won the Cox Plate by a narrow margin from Happy Trails, with Fiorente running third. Shamus Award was ridden by apprentice jockey Chad Schofield, who made the most of   inside barrier 3 to take Shamus Award to the lead on the fence, leading all the way from start to the finish.  A remarkable outcome, as Shamus Award only got into the field when Atlantic Jewel was scratched. His light weight and fleetness of foot, meant that the older horses were unable to catch him.  None of my three favourites ran a place, Super Cool getting the closest in fifth spot. It’s A Dundeel had a torrid run, being forced to race wide the whole trip and Puissance de Lune, who was found to be lame after the race, wouldn’t settle and finished way back in the field.

Cox Plate finish at the top of the straight – Shamus Award leads with Fiorente just behind him. Super Cool is third at this stage, with Happy Trails on his outside.

I must admit I felt very disappointed with the result, quite deflated in fact, as I could have sworn one of my three favoured horses would have run a place.

With that feeling of disconsolation I made my way to the bus stop and home, only cheered by Catkins win in the International Stakes.

Despite the final outcome, it was overall an enjoyable outing at the races. You go to see the colour and action and the drama of the sport, and the day’s race card certainly delivered that in spades.

I’ve decided I might as well get some value out of my Flemington season’s ticket and attend Derby Day next Saturday, despite the mooted crowds.  I’ve never attended the event before, so it will be a new experience, and the race card looks excellent.

On Friday night Buffering, who has run second in a great many Group One events finally won one himself, taking out the Manikato Stakes. Hong Kong star Lucky Nine ran second and Sessions was third. Samaready didn’t feature at all, and reportedly found the track too soft for her liking.