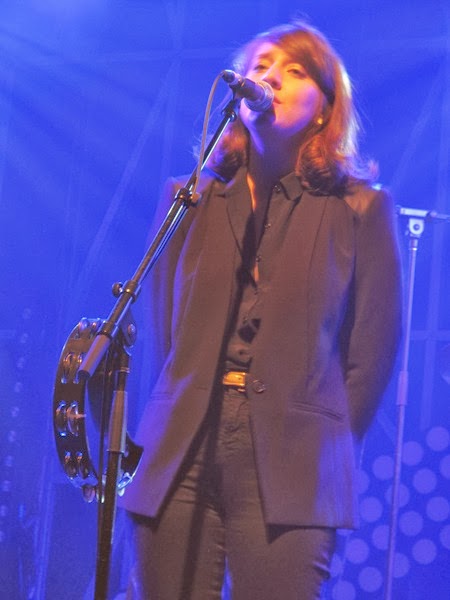 It was a surprising and enervating evening’s entertainment on Wednesday night at the Foxtel Festival Hub, the pop up venue on the banks of the Yarra especially set up for the Melbourne Festival.

It was a pretty basic structure as concert venues go, but as the show was fully seated, the Foxtel Festival Hub was comfortable, if a trifle chilly, nestling as it does right next to the river. But as the hall filled up, and the show began, it became hardly noticeable.

Henry Wagons, entertainer extraordinaire, opened the show with a set of songs, mostly of his own composition. Henry has just become the father of a daughter, Caspar the friendly girl is her name he informed the enthusiastic audience.  As usual Henry Wagons’ act is over the top and very amusing. He mainly performed solo, but called on Kelly Day from The Nymphs and Seamus O’Sullivan for added effects later in his set, Kelly dueting  on Unwelcome Company and I’m In Love With Mary Magdalene, and Seamus providing pedal steel accompaniment on Give Things A Chance To Mend and crowd favourite Willie Nelson.

His running joke of the night was the fact that he was playing in the Foxtel Hub, quipping that “sometimes free to air isn’t enough”. Henry knows how to play an audience and he had them clapping and singing the chorus to Willie Nelson at the end of set, declaring that he wasn’t going to leave the stage until they did so, and adding that he was a very patient man. Of course, the audience obliged, Henry Wagons being a very popular and dynamic live performer who charms his audience with his outrageous wit. He’s not a bad singer songwriter either. 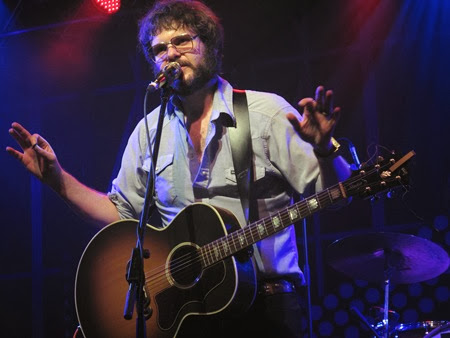 He returned during Caitlin’s set to sing Summer Wine with her, presenting her with the following lyric sheet, before launching into the song. 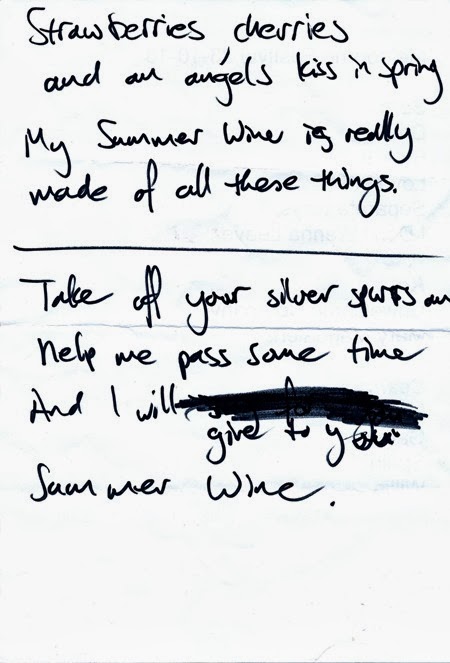 “Lyrics” to Summer Wine – picked up from the stage after the show.

Caitlin Rose was accompanied by her band, which included Seamus O’Sullivan. It comprised two guitarists, a drummer, bass as well as the aforementioned pedal steel. They were a tight, invigorating outfit, perhaps a bit overwhelming for Caitlin’s voice, but saying that, the lyrics came across loud and clear. Anyway, they produced a big and rich sound

Kicking off her set with Pink Champagne, a delicious song that evokes smoky nightclubs, of which Caitlin said was a about a wedding in Las Vegas, she breezed through half of the songs on her latest record The Stand-In, including No One To Call, Waitin’, Silver Sings, I Was Cruel and also performed a few from her debut CD Own Side Now as well as couple of covers, most notably The National’s Pink Rabbits, the title of which refers to a rather disgusting cocktail, comprising milk, strawberry syrup and tequila, but the song itself is a terrific drug crack up heartbreaker. Makes me want to go out and check up on The National, who I admit I have not heard of before.

Caitlin seems to have a thing for rabbits as she recorded the song Rabbit on her debut album and sang it on the night.

When I first saw Caitlin Rose back in 2011, she was a raw talent. She has grown into an accomplished performer since then, and handled herself like a professional who had been taking the stage for years.

She did admit that she would like to be entertainer like Henry Wagons, who quite hogged the stage when they performed  a duet of the Lee Hazlewood song Summer Wine. 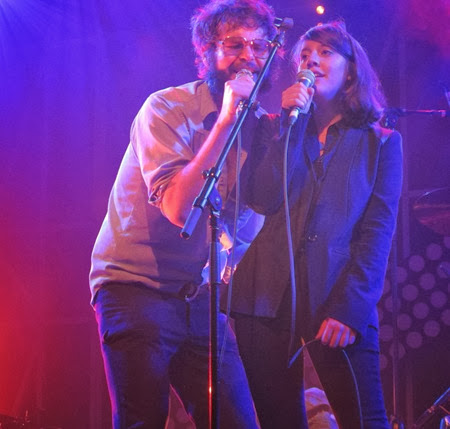 Her show was more rock than country, though Caitlin’s voice has drawn comparisons to Patsy Cline and Loretta Lynn, so amid the
rock ‘n’ roll one could definitely distinguish a twang.

She ended her set with the wonderful Shanghai Cigarettes, though was persuaded to come back for one encore where she performed a new song apparently titled T-Shirt.

I managed to snaffle her set list from the stage at the end of the show,  a handy reference to my own notes. The scanned copy is below.  Who knows what the cryptic notes mean. 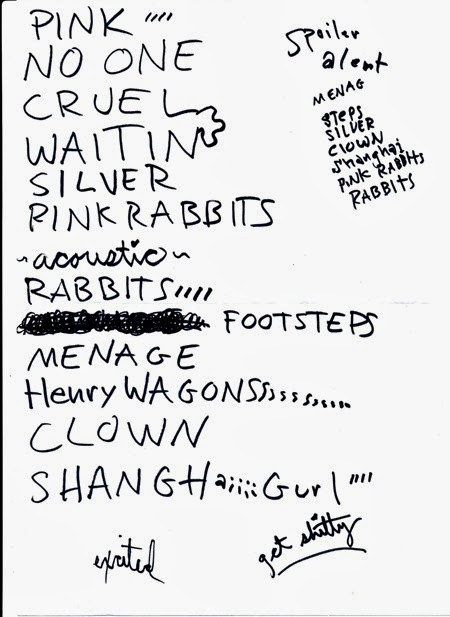 And so ended a very satisfying evening of wonderful entertainment at the Foxtel Festival Hub.

1. Driving All night
2. I Blew It
3. Love Me Like I Love You
4. Separate Ways
5. I Don’t Wanna Leave
6. Unwelcome Company
7. I’m In Love With Mary Magdalene
8. Give Things A Chance To Mend
9.Willie Nelson