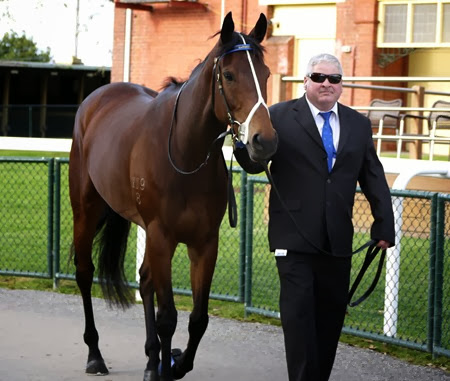 The great WFA competition, the Cox Plate is to be run this Saturday, but alas super mare Atlantic Jewel will not be taking her place in the field. She has succumbed once again to a tendon injury and is to be retired.  So the highly anticipated spectacle of her and It’s A Dundeel going head to head again, will never happen.  It’s terribly disappointing that we will not see Atlantic Jewel grace the track again. There was always an added sparkle to a race day if she was running. She goes out with 10 wins from 11 starts, four Group Ones and three at Group Two level.  And of course her only loss was a narrow second to It’s A Dundeel in the Underwood Stakes on a slow track, where she certainly was far from disgraced.

I will remember with affection, and was glad to be present, the few times I witnessed the wonderful Atlantic Jewel on the racetrack. Alas her star was all too brief, but we can look forward to seeing her sons and daughters in the future.

If it’s not one thing, it’s the other!

Another dramatic event that effects the outcome of the Cox Plate is the suspension of top jockeys Glen Boss and Nick Hall for careless riding on  Caulfield Cup day. Glen Boss has been the regular rider of Puissance de Lune in all his races, so you would assume that his personal knowledge of the horse’s idiosyncrasies would boost the confidence of the average punter in betting on the horse . Ben Melham who often rides for Darren Weir will now take the ride. Who knows, a fresh jockey and new approach may succeed, as Glen Boss has not won on Puissance de Lune at his last three starts. Nick Hall was to have ridden Masked Marvel in the Cox Plate, now Michael Rodd will ride him, a second best option after Atlantic Jewel.

Despite Atlantic Jewel not contesting the Cox Plate, there is some consolation in that my other favourites It’s A Dundeel, Super Cool and Puissance de Lune are all part of the field.  It would be great if they ran the trifecta.  Of the three I reckon It’s A Dundeel has the winning edge. The little stallion has recovered from his minor setback and is primed to go, according to his trainer and jockey. Interestingly, I first saw him race on Cox Plate day last year where he ran second to Super Cool in the Mitchelton Wines Vase, which is run over the Cox Plate distance of 2040 metres. It was my first sighting of Super Cool that day too.

Last year Green Moon was the Cox Plate favourite and failed to run a place. He went on to win the Melbourne Cup as we all know, but by then he was out favour due to his Cox Plate flop, so it was a big surprise.  Green Moon is again entered in the Cox Plate this year. Lloyd Williams has entered three runners, the others being Masked Marvel and Seville, and declares Green Moon his pick of the three.

However, as it’s been raining for the past two days, with more on the way, the Moonee Valley track could well be rated on the slow side, especially as 17 races over a night and a day will be run on the track before the Cox Plate, which is scheduled as the last race at 5.40 pm.  Goodness knows what state it will be in by that time!

So who are the mudrunners? Well, Puissance de Lune has some form on slow and heavy tracks, as does Foreteller, Fiorente and of course It’s A Dundeel won the Underwood Stakes on a soft track.  The two three year olds, Long John and Shamus Award may have an advantage with their lightweight in heavy going but neither have much form in the wet, and are they good enough to beat the likes of It’s A Dundeel? We’ll see…

The other Group One race of the weekend is the Manikato Stakes on Friday night. It’s got a cracker line up that includes champion Hong Kong sprinter Lucky Nine, and Moir Stakes heroine Samaready, as well as the usual suspects Buffering, Bel Sprinter and Rebel Dane. Add smart Sydney mare Arinosa and Newmarket Handicap winner Shamexpress for extra spice and you’ve got a good race. It’s being run as the last race of the evening meeting at 10.00pm. I wonder how many punters will be around to watch it.

The Moonee Valley night and day blockbuster carnival entails eighteen races in all, eight on Friday night and ten on Cox Plate day. Both meetings have strong support cards that I’m not going to the cover, though there are some interesting Group 2 and 3 events.

I won’t be going to the Manikato Stakes meeting, as I am not fond of night racing, but I’ll be there with bells on for Cox Plate day.

As I’m posting this entry early in the week, I expect conditions to mutate over the coming days, especially if the rain keeps up.