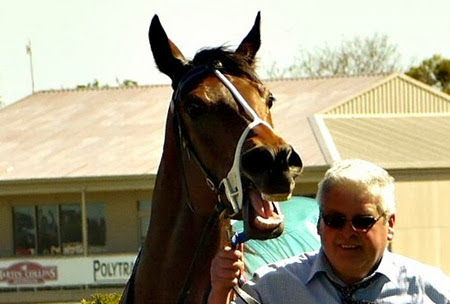 I Won! Atlantic Jewel celebrates her easy win in the Caulfield Stakes

There were girls dressed to the nines, sailors in sailor suits, young swanks posing as extras from the Great Gatsby movie, and the usual range of punters, drunks, kids and hoi polloi of the racing world.

The perfect sunny day drew them all to Caulfield racetrack to try their luck on Caulfield Guineas Day.

I arrived at the track just as the runners in the second race were being loaded into the barriers, and made it to a position on the fence towards the top of the straight to watch the race.  Warm favourite, Queensland filly Missy Longstocking, won it easily.

The Blue Sapphire Stakes was next up, so I grabbed a spot on the very limited fence space around the mounting yard to watch the parade. This was one of the races I was keen to see due to the presence of glamour filly Miracles of Life. 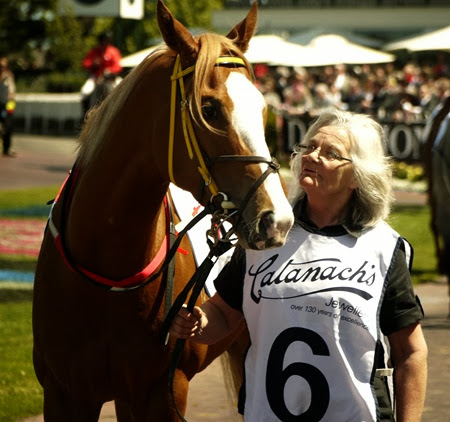 Miracles of Life – forelock all over the place.

She had a bad hair day – even worse in fact, as she was discovered to have bled internally after the race and will be out of action for the rest of the spring. It goes without saying that she didn’t win, being blocked for a run in the straight and having no hope of catching the winner Lion of Belfort, let alone Safeguard who came second. 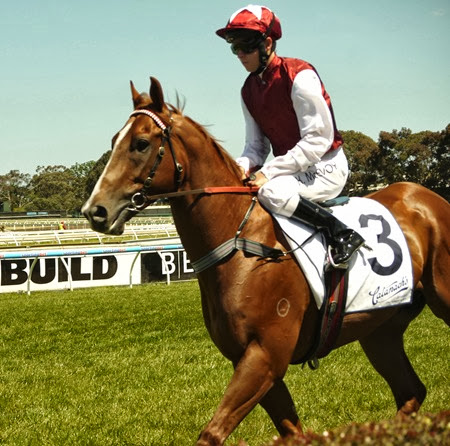 Safeguard on his way to the barriers

Blue Sapphire finish – Villa Verde (grey) leads Safeguard, with Lion of Belfort (white blinkers) just behind and ready to pounce. Miracles of Life is on the fence behind a wall of horses.

Arriving so early at the course, meant a long day hanging around for the main races, which were scheduled in the late afternoon. It was quite warm and crowded, though not oppressively so, but there were shady places to relax in peace.

The most interesting race was of course Race 6 the Caulfield Stakes, starring Atlantic Jewel with co stars Super Cool and Foreteller. Green Moon didn’t run, being scratched on Saturday morning due to an elevated temperature. So Atlantic Jewel only had to contend with four other rivals.

I watched the parade in the mounting yard, arriving in good time to find a spot on the fence. 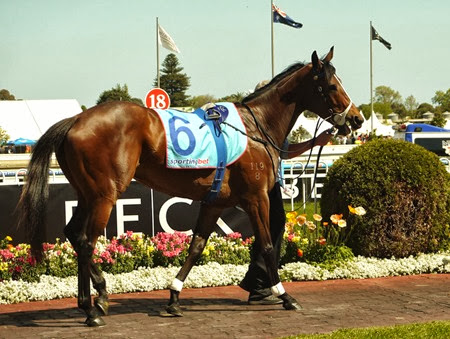 Atlantic Jewel in the mounting yard 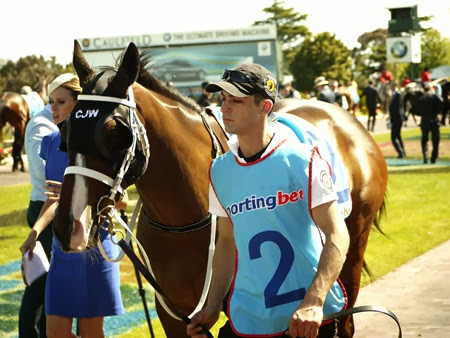 Foreteller in the mounting yard 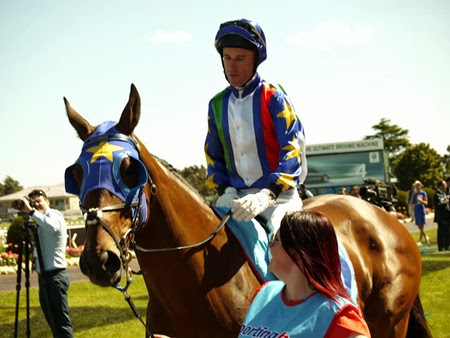 Super Cool in the mounting yard

The race was run in a casual fashion. Led by Spacecraft, they raced in single file until the 800 mark, when Atlantic Jewel started to make her move. Super Cool joined her briefly at the lead, but she powered away down the straight to win easily by four lengths from Foreteller with Super Cool running third.

Any doubts as to her ability to run 2000 metres were certainly quashed and she is now hot favourite for the Cox Plate over It’s A Dundeel.  Whether he would have beaten her on Saturday, we’ll never know, but they meet again in the  Cox Plate, which is promising to be a doozy.

Atlantic Jewel returns to scale to face a barrage of press photographers. 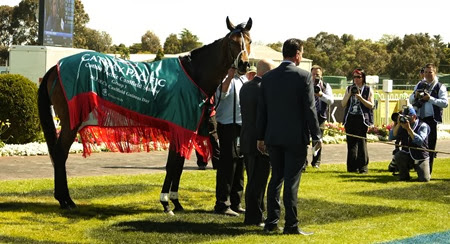 Atlantic Jewel in the winners rug, obligingly turning her head in my direction for this photo.

The Group Two Herbert Power Stakes was the next race of interest for me. This race gains the winner automatic entry into the Caulfield Cup.

This year’s edition was taken out by Sea Moon, a win where he could keep the prize money after losing out in the Bart Cummings in a protest.

First time down the straight – Oasis Bloom leads with Sea Moon on her outside.

Sea Moon, head high, takes the lead in the final run down the straight

Oasis Bloom held on for second and Simenon (no 2 saddlecloth) ran third.

For the last two races I decided to take up a different position to watch the action.

At the far end of the stalls area there is a raised area overlooking the racetrack just past the finishing post. I basically went up there because I couldn’t be bothered returning to the public lawn and fighting my way through the crowds. It turned out to be an OK spot for taking photos of the runners as they proceeded to the barriers, and returned after the race.

So I watched the Group One Toorak Handicap up there and snapped the following photos of the contestants. 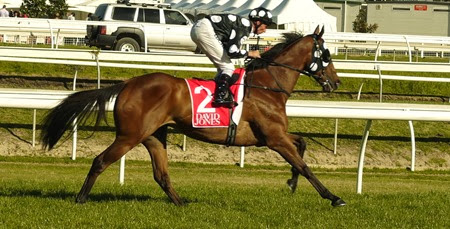 Solzhenitsyn – the winner on his way to the barriers 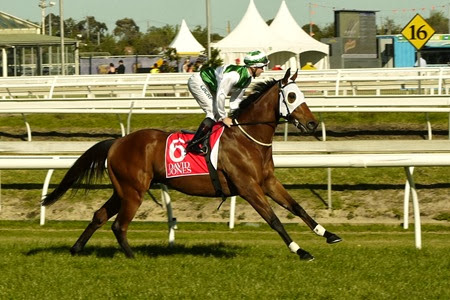 Speediness on his way to the barriers 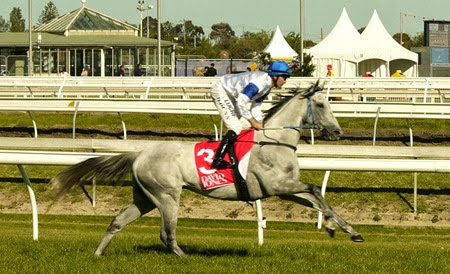 Luckygray on his way to the barriers 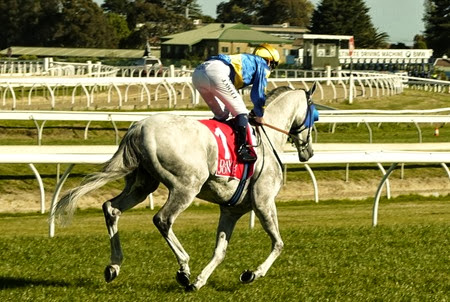 Linton on his way to the barriers

Solzhenitsyn won the race for a second time in succession. French horse Trevieres came second and old Blackie ran third. I was disappointed that Linton failed to run a place. 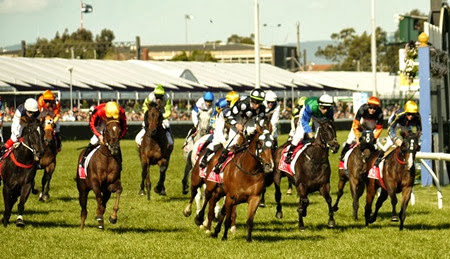 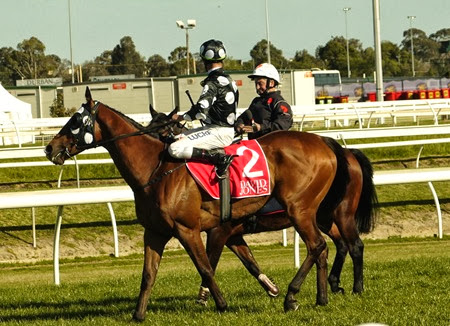 Solzhenitsyn returns to scale, his jockey being interviewed by a Channel 7 representative.

Finally, it was time for the feature event, the Caulfield Guineas, at the ridiculous hour of 5.45pm. It had been rather tiresome trying to kill the five hours I had been at the track, so I gritted my teeth and stayed for the event, watching it from the hill above the stalls. 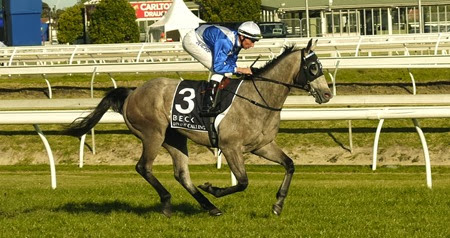 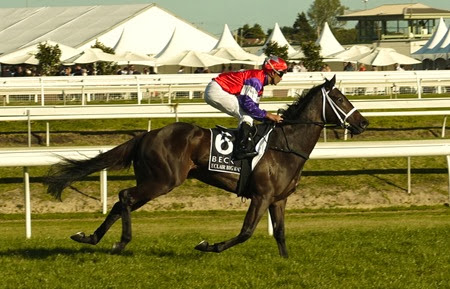 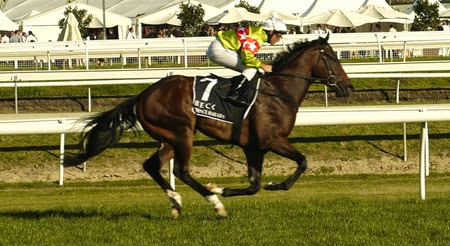 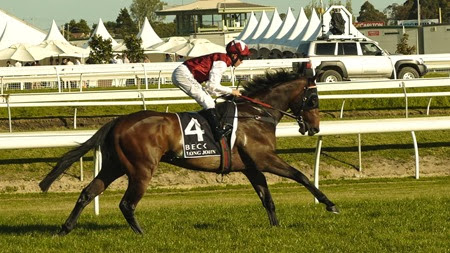 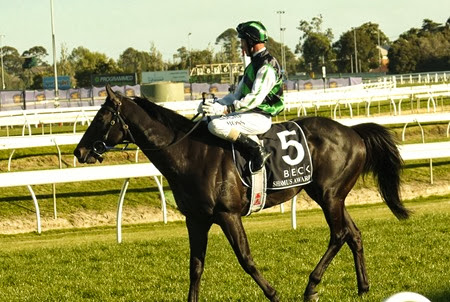 Past the post – Long John leads with Divine Calling a length or two behind.

As I wasn’t inclined to bet on the race, I didn’t have to wait around for correct weight, or collect winnings, so I made my way home post haste. Fortunately the trains were again running like clockwork, so it only took a little over 30 minutes to get home.

I’m going back to Caulfield this Wednesday for the Group One Thousand Guineas, for which I booked a ticket some months ago. The race will be run mid afternoon, so it won’t be as tiring as Saturday. And the added attraction is that It’s A Dundeel will gallop between races three and four. I’m also looking forward to seeing Guelph run in the main event; she is regarded as the best three year old filly of the season.