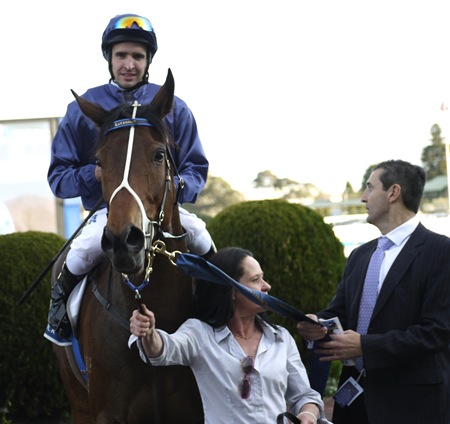 Atlantic Jewel returns to scale after winning the Memsie Stakes

What a day! And one to remember as an excellent race meeting, which despite the long wait for the feature race, was worth every penny of the entrance price.

After a very serendipitous conjunction of trains, getting off one and straight onto another, I arrived at Caulfield racecourse just before 1.00pm as Race 2 was in progress.  So I had plenty of time on my hands before Race 3 to check out the stalls area and admire the horses.

Originally I wasn’t going to have a bet on Race 3 the Hocking Stuart Handicap, but changed my mind after a fleeting overheard reference to Darren Weir caused me to remember that he’d been having a good spring so far, with winners in the past three meetings. So I checked the race book, and discovered that the amusingly named Bec Said No Credit was trained by D K Weir, and looked as if she had form on her side, having won her last two races at Geelong.  So I wagered $5.00 for a win with the nearest bookie. 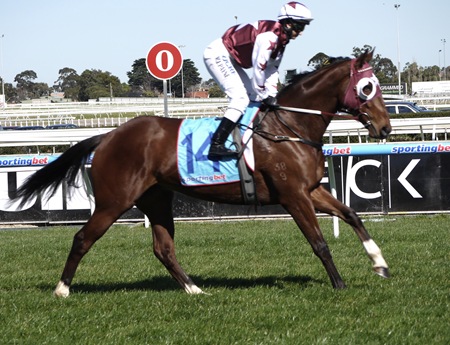 Bec Said No Credit on her way to the barrier gates

Serendipity rewarded me as Bec charged home to win and paid a handsome $8.50 dividend.

A good way to start the afternoon, I thought, as I collected my winnings, though I had mixed luck over all as the day wore on.

Race 4, the HDF McNeil Stakes was next on the card, and of course was full of interest with the return of glamour filly Miracles of Life who started warm favourite.

I checked out the main contestants in mounting yard…

Miracles of Life is a tiny compact filly, pretty as a picture. 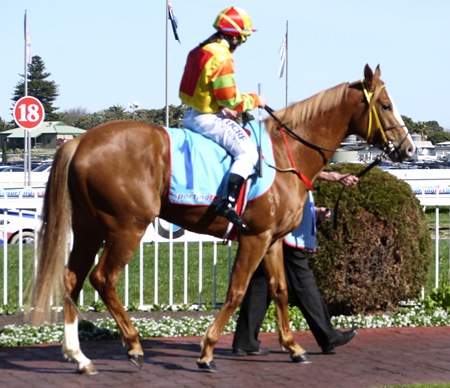 Miracles of Life parading in mounting yard (above & below) 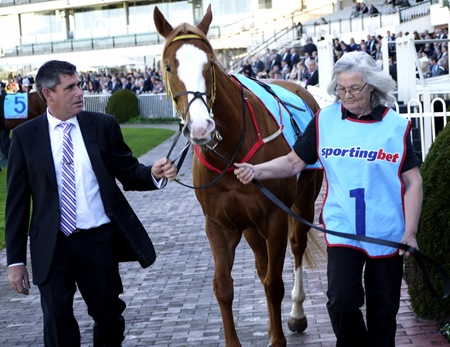 Her main opposition, however, were great hulking colts.. 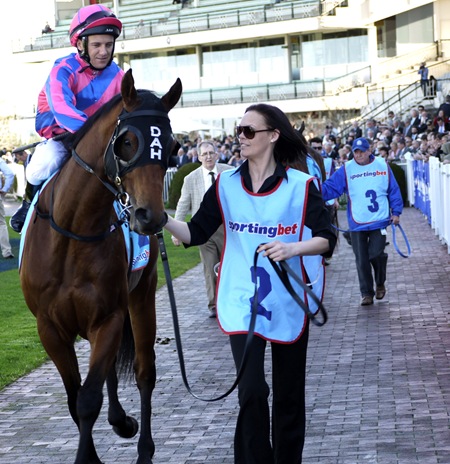 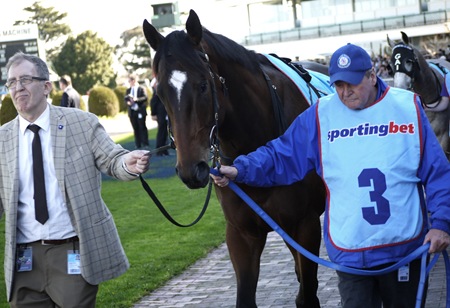 Prince Harada in the mounting yard

The ensuing race was a somewhat rough affair. Miracles of Life stormed out of the gates at the speed of light and vied for the lead with Divine Calling. Her jockey Lauren Stojakovic seemed to be having trouble holding her back, so she let her lead, which in turn left her a sitting duck. It got rough during the closing 100 metres, when Fast N Rocking swept past little Miracles, knocking her into Prince Harada on her inside, and almost causing her to fall. That effectively stymied her chances, as Fast N Rocking went on to win from a fast finishing Prince Harada with Thermal Current taking third spot.

HDF McNeil Stakes finish – Fast N Rocking has just swept past Miracles of Life, causing her to falter. Prince Harada is on her inside.

It was most disappointing to see Miracles of Life out of a place, her first loss in five starts, but she will continue in shorter races, her main target apparently being the Group One Coolmore Stud Stakes on Derby Day. Prince Harada, if he hadn’t been hindered when it mattered, could easily have won with more luck in the running.

By now it was about 2.30pm and the afternoon stretched ahead with the feature race scheduled for 4.50pm.

Race 5 the BMW Handicap, was up next. Strawberry Boy was the favourite and looked like he was in an invincible position going down the straight, several lengths ahead of the rest… 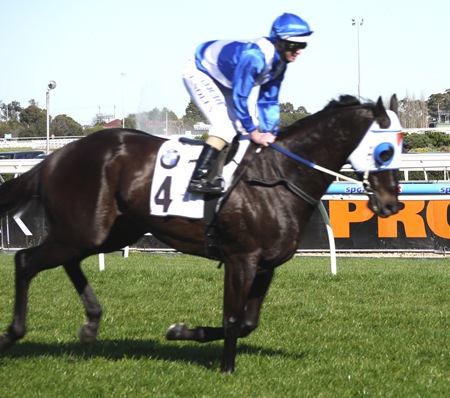 Strawberry Boy on his way to the barrier.

…but he was pipped by the fast finishing Lidari, hurtling down the outside and stable mate High Esteem who crept through on the inside. It ended in a trifecta for Peter Moody trained horses.

Of more interest was The Shark Stakes, in which 2012 Blue Diamond winner Samaready was making her return to racing after a year recovering from an injury. She wasn’t really expected to win, but she took command in the straight and won by a length or so from Chiaramonte and Anise. 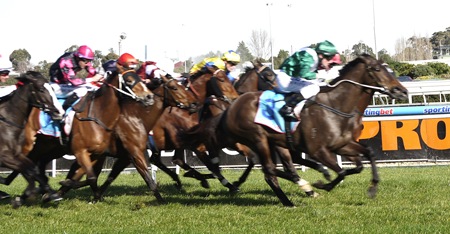 Fortunately it was a splendid day for going to the races, the weather being warm and sunny, making it a pleasure to be outside. And what better way to kill time on a sunny day than to be trackside.

However, I do admit that by the end of Race 6 the time was starting drag with one more race to go before the feature. This was the Slickpix Stakes for stayers.  It was won by long shot outsider Ibiceno, with Mr O’Ceiran running second and Pakal third.

The Group One Memsie Stakes was worth waiting for as it was chock full of champion gallopers. Atlantic Jewel was the star of the show and I’m really thrilled I got some decent photos of her - like the one below. 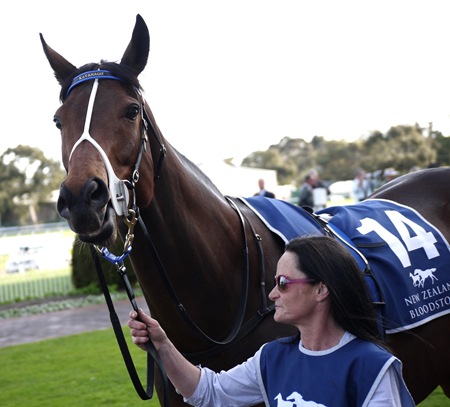 Atlantic Jewel in the mounting yard.

She has now won eight races from eight starts, three at Group One level, and seems set to take up Black Caviar’s mantle as the people’s champion. Her stunning, seemingly effortless win in the Memsie was just as extraordinary as Black Caviar’s wins were in sprinting races.  It was a privilege to be present to see her in action.

I also took photos of her main competition… 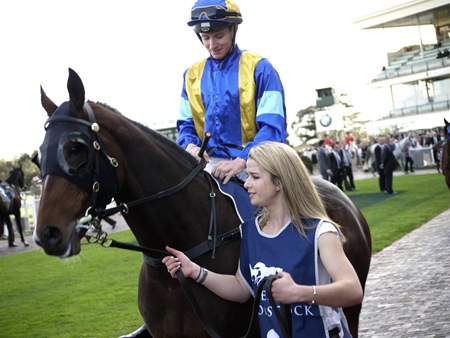 It’s A Dundeel in the mounting yard – he finished fourth 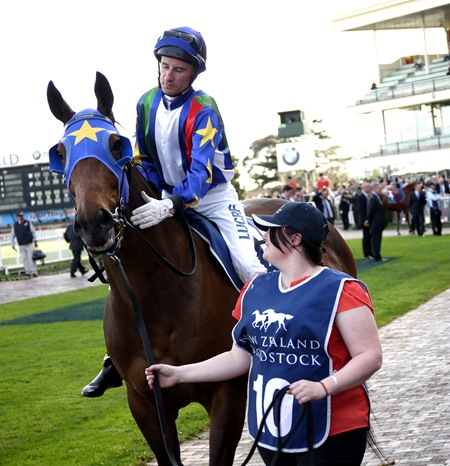 Super Cool in the mounting yard – he finished a blistering third

I was pleased to see Super Cool finishing so well. In the above picture of the race finish, he’s nowhere in sight, but after racing three wide throughout the race, he stormed down the outside to narrowly miss second place behind Ferlax. It’s A Dundeel was a tad disappointing, but will no doubt improve as his races get longer.

All up it was great day at the races, despite the lag between the two feature races, and a memorable occasion because of Atlantic Jewel. Let us fervently hope she stays sound through the rest of the spring, and goes on to greater glory.

Next Saturday the races are at Flemington and feature the Group One Makybe Diva Stakes, where Puissance de Lune will be in action again.

Super Cool looking right at you, what a sweetie, and that was a sweet start to your day may you have many repeats.