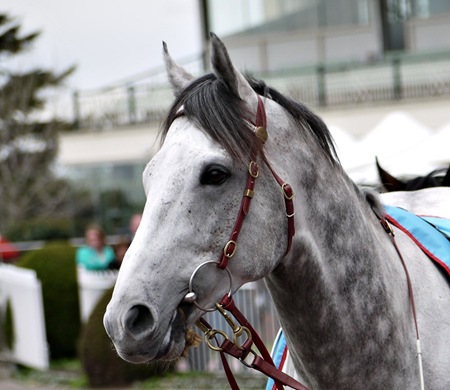 Puissance de Lune – can he win his first Group 1?

It may be election day tomorrow, and though I will exercise my democratic right and place a vote for whoever (not Liberal),  my thoughts are more taken up with thoroughbred horse racing.  I’ve been bored out of my brain by the election campaign,  so I’m glad that part is done and dusted and I can settle down to hating whoever wins power, be it Rudd or Abbot.

There is a mare running tomorrow in the Let’s Elope Stakes called A Time For Julia who gets my vote as the omen bet for the day. There’s also Swing Vote and Ruud Awakening in the first at Flemington.

Racing in Melbourne this weekend is at Flemington and features the Group One Makybe Diva Stakes, run over 1600 metres. The field of 15 runners is made up of mostly imported stayers, starting their spring campaigns on their way to the big cups and include the exciting Puissance de Lune who already has a run under his belt and will start favourite. This race is Puissance de Lune’s hardest challenge yet, so it will be fascinating to see if he can prevail and thrash this mob as he thrashed his rivals in the P B Lawrence Stakes a few weeks ago.

His main rivals in the Makybe  Diva Stakes are Foreteller, who occasionally springs a surprise win, the well credentialed Sea Moon, who is a very interesting prospect having good form in the UK. I’m really attracted to Masked Marvel, simply because of his name, though his form looks iffy. This time last year I would have had Manighar as a top pick, but his form through autumn was less than inspiring, but he redeemed himself slightly when he ran second to Quintessential in the Eagle Farm Cup back in June, so he may have returned to form.

I’m looking forward to being present at Flemington for the race, utilising my season’s ticket, and will be getting there early to see the intriguing Cauthen in the second  race, the Henry Bucks Best Dressed Stakes (1400 metres). He’s up against a big field of smart three year olds, including Long John and Shamus Award who he beat at Moonee Valley a fortnight ago and will be trying to turn the tables on him in this race.

Royal Randwick in Sydney hosts an interesting race card as well this Saturday and features several Group races which I will watch on course (hopefully) due to my interest in the participants. For instance, in the Group Two Furious Stakes Guelph who won the Group One  Sires Produce Stakes and Champagne Stakes in the autumn starts her spring campaign. Also champion sprinter Hay List returns after a long absence in the Group Three Concorde Stakes and old favourite Shoot Out steps out in the Group Three Tramway Stakes.

Hopefully Melbourne’s weather will play nice and produce a mild dry afternoon, despite the forecast for showers.