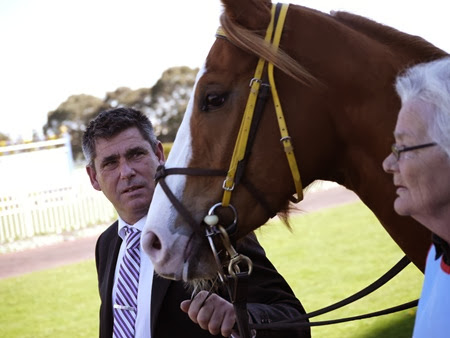 Due to the AFL Grand Final there is no city race meeting this Saturday. Instead, Moonee Valley kicks off its season of night racing tonight, featuring the Group One A J Moir Stakes. And on Sunday, Caulfield hosts the running of the Group One Sir Rupert Clarke Stakes.

Originally I was not going to attend the races this weekend, but as Miracles of Life will be contesting the Group Three Champagne Stakes at Moonee Valley, I have changed my mind. After her failure in the HDF McNeil Stakes in August, this race will be her chance to make amends.  It is a much easier race for her compared to the McNeil Stakes and she’s back against her own sex, who she should account for easily. Mildly threatening are Metastasio, Thump and Ruude Awakening.

The feature race is scheduled for 10.00pm, so I’m not sticking around for it, but will watch it when I get home. The A J Moir Stakes, recently known as the Schweppes Stakes, used to be run on Cox Plate day as a Group Two race, but it has been moved to the opening night of the Moonee Valley night racing season, and elevated to Group One status. It has been won by champions; Black Caviar won it twice (2010/2011), Apache Cat, Miss Andretti to name a few.

Buffering won it last year, and is a top chance to win it again this year. For such a consistent sprinter, he has yet to win a Group One.  He will be challenged by top class sprinters Bel Sprinter and Epaulette, and classy mares Snitzerland and Samaready.

By Sunday the AFL Grand Final will hopefully be done and dusted, so Sunday’s racing card at Caulfield will be of interest to those who cannot live without the thrill of competition.

The feature race is the Sir Rupert Clarke Stakes, for middle distance runners over 1400 metres.  Moment of Change won it last year, but it is harder to pick the winner for this year’s edition. I’m kind of hoping Linton, who won the Queensland Stradbroke Handicap at long odds back in June and won me a very handsome sum, will prove his class and snatch another win at good odds, but he is less favourably weighted this time, so may be at a disadvantage because of it. Solzhenitsyn has been in good form of late and is one of the main chances, along with Ferlax who recently ran second to Atlantic Jewel in the Memsie Stakes. Others in the picture are Rebel Dane, Speediness who is in fantastically good form having won his last two starts, and Lidari who won his last start at Caulfield before running third to Fiorente in the Dato Tan Chin Nam Stakes.

I won’t be going to the meeting at Caulfield, but will watch it at home for a change.

Other news this week was the announcement that my long time favourite Sydney racehorse Shoot Out has been retired. He was a grand old trooper who won 10 races and placed in 11, out of 37 starts. Five of his wins were at Group One level. He was the last of the High Chap boys of 2010 still racing and always acquitted himself competitively in quality races. He will spend his twilight years on his owners property in Queensland, and no doubt will be cherished into old age.

Unfortunately Miracles of Life was “thumped” in the Champagne Stakes, that is she was beaten by Thump, who led throughout. Miracles raced much more quietly last night, but left her run too late and was unable to catch the winner. I Love It ran third.

Samaready won the Group One Moir Stakes by four lengths from the eternal bridesmaid Buffering. I did not witness it in person, having left Moonee Valley after the running of race 6, but watched it at home. Lucky I left when I did, as a rain storm hit 15 minutes later, by which time I was snug on a bus on my way home.

I must admit I’m not a big fan of night racing, though there were plenty of people who were at the track who would beg to differ.