What a splendid racing season it was…the best in many years and pretty well interesting throughout the entire sixteen weeks it lasted.The Stars

So You Think who missed the autumn season recovering from a throat operation, stormed into the spring with an unbeaten run of five races including winning a second Cox Plate. A magnificent looking animal he became the archetypal champion of the turf, his run of wins ending with the Melbourne Cup where he was by no means disgraced in his game third placing. He was a joy to behold in all his races, though he certainly stymied the chances of his opposition by winning several choice Group One competitions. Alas that’s the last we’ll see of him on Aussie racetracks, but it will be interesting to see how he performs on the world stage. 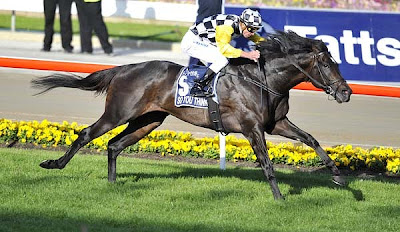 So You Think
A late starter in the spring season was the super sprinting mare Black Caviar who finished the season last weekend, remaining unbeaten in eight starts, by totally annihilating her opposition in the Patinack Farm Classic. Hay List, on whom much was expected in the race, failed to fire and finished second last. Black Caviar will return in autumn to contest rich sprints like the Lightning Stakes. Gratifyingly her trainer when asked about the possibility of her racing overseas retorted that she would stay in Australia and if the world wanted to challenge her they could come here. As an aside, her little brother Moshe (Bel Esprit – Helsinge) had his first start yesterday in Bendigo and won by six lengths, He might yet challenge his big sister in the future. 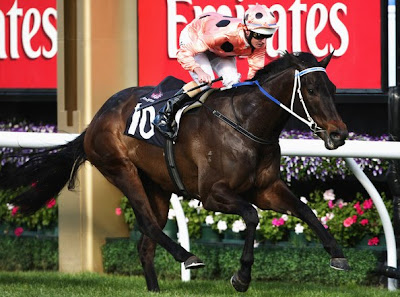 Black Caviar
Hay List, despite his uncharacteristic performance last weekend, can still be counted as one of the stars of the spring carnival with three wins in a row including the Group One Manikato Stakes. I will be looking forward keenly to his return in the autumn when we will undoubtedly witness another clash with Black Caviar.

Sydney stayer Maluckyday seemed to come out of the blue a few days prior to the Cup. One moment Melbourne race fans had not heard of him, the next moment he’d won the Lexus Stakes then run second in the Melbourne Cup. A very promising young stayer, he’s one to consider for next year’s Melbourne Cup and the staying handicaps in the autumn season.

More Joyous, though denied the glory of winning the Cox Plate, won four races in succession prior to that race, including two Group One contests in open company, so she’s still a star in my book. With So You Think out of the picture in the future, More Joyous and the others who had the misfortune to meet the champ, will no doubt be back competing for prizes in autumn.Black Bookers
Several of my black book horses competed throughout the spring without mishap but with little luck. Favourites like Typhoon Tracy and Shoot Out were competitive but unfortunately unable to win, in Tracy’s case, though Shoot Out started the season with wins in the Bletchingly Stakes and the Liston Stakes. The tragedy of the spring was the death of Shoot Out’s regular jockey Stathi Katsidis a few days before the Cox Plate. We’ll never know if Stathi would have made a difference to Shoot Out’s chances in the Cox Plate, but probably not. Linton failed miserably in the Melbourne Cup, but is worth another chance I reckon when he matures. He after all ran second to Maluckyday in the Lexus.

Of the up and coming youngsters sure to be firing in the autumn season, Star Witness verified that his Blue Diamond win wasn’t a fluke, winning the Group One Coolmore Stud Stakes and running a very creditable second to Black Caviar in the Patinack Farm Classic. The Victoria Derby winner Lion Tamer is also worth watching for in autumn and will be a force to contend with if the tracks are heavy.

This coming Saturday there is an interesting race card at Sandown Hillside where good old Zipping will be gunning for a fourth Sandown Classic and the Sandown Cup features a field containing some unlucky Melbourne Cup contestants trying over the 3200 metre distance again.

There’s a mini carnival in Western Australia in a week or two and summer brings the Magic Millions hopefuls into play prior to the autumn season, but I’ll spare you the details and write about something else for a change.
Posted by Anne S at 4:16 pm