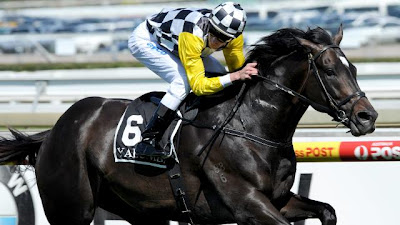 So You Think winning the Yalumba - photo credit - Nicole Garnston - News Limited
It was a superb day of racing at Caulfield last Saturday. I watched it on free to air television which finally has caught up with the spring racing carnival and is presenting it live from now on. Much better, despite the inane babble of the commentators, than trusting on getting a good video reception on the internet,

It seemed last Saturday to be one brilliant performance after another, firstly Linton winning the Herbert Power Stakes, which qualifies him for the Caulfield Cup, in which he will not run. He will be running in the Melbourne Cup, if he can get a run, and represents an excellent lightweight chance, like stable mate Efficient before him.

Black Caviar signalled that she was back with a vengeance, effortlessly blitzing the Schillaci Stakes field with a stunning win, making her tally six wins from six starts. I can hardly wait for her and Hay List to face off.

More Joyous despite carrying 58kg (a record weight for a mare in the race) and having a difficult time of it, being blocked and bumped through the race, prevailed in true champion fashion to storm to victory in the Toorak Handicap. No worries about her handling the Melbourne way of going (anticlockwise).

The race of the day however, was the Yalumba Stakes, where So You Think treated the rest of the field with contempt winning by several lengths and looking glorious in the process. Alcopop came second and Whobegotyou managed to puff into third spot.

The Caulfield Guineas, after all the above, could have been a bit of a let down, but wasn’t. Peter Moody’s Anacheeva brought home the bikkies with a decisive win over Winter King.

The fillies Thousand Guineas is to be run tomorrow at Caulfield and has attracted a classy field of fillies. Talented Sydney filly More Strawberries looks the one to beat, though one of the other fillies could deny her victory, Sistine Angel for instance, or Divorces, Yosei, Ringa Ringa Rosie not to mention Brazilian Pulse who has been running well of late.

The first of the big rich races, the Caulfield Cup, is to be run this Saturday. I will preview that later.
Posted by Anne S at 1:52 pm